NEW DELHI: A group of retired Indian Foreign Services officers has moved the Central Administrative Tribunal (CAT), accusing the government of overlooking the original recommendations of the Sixth Pay Commission by drawing a unilateral line between two categories of officers and giving one among them huge pensionary benefits. 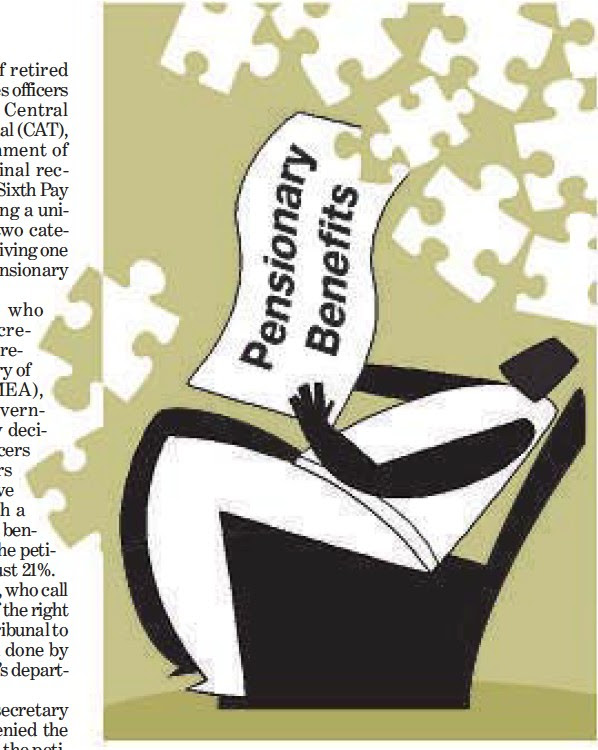 Illustration: ABHIMANYU SINHA
The petitioners, who retired as under-secretaries and deputy secretaries from the ministry of external affairs (MEA), claimed that the government’s discriminatory decision has benefited officers who retired as directors — just one grade above the applicants — with a 74% hike in pensionary benefits. In comparison, the petitioners got a hike of just 21%.
The retired officers, who call this a gross violation of the right to equality, want the tribunal to quash the bifurcation done by the ministry of finance’s department of expenditure.
Though an under-secretary from the MEA has denied the allegations levelled by the petitioners, CAT has sought a response to the senior citizens’ petition from the finance ministry.
The direction came after the petitioners refused to accept the MEA’s response, stating that the ministry was never a party in the proceedings.
The petitioners took a strong objection to the under-secretary filing an affidavit in individual capacity.
According to the petition, the Sixth Pay Commission had — in 2008 — for the first time recommended pay bands for various categories of officers. The under-secretary and directorlevel officers were clubbed together with a pay-band of R15,600-R39,100.
However, when the government implemented the commission’s recommendations, it delinked the senior and director-level officials from pay-band three to move them to a higher grade of pay-band four.
The pay scale for the higher category was R39,200-R67,000.
SN Dixit, one of the petitioners, said it was wrong to prioritise one category of officials over the other because no special qualification or age requirement was needed for getting appointed to these posts. The officials, he said, get promoted as per seniority and vacancy.
Visit : www.bharatpensioner.org
Read: "Bharat Pensioner" Official monthly organ of BPS