Effect of BPS suggestion on http://mygov.in/. PMO & DARPG to abandon 'Forward & forget policy' with respect to'Online Grievance redressal'. System being revamped to trek resolving of grievance to its logical end

ZoomWhile analysing public grievances to identify policy gaps, PMO asks DARPG to upgrade system, classify and track complaints
THE PMO ALSO CALLED FOR ENCOURAGING THE POOR TO ACCESS THE ONLINE GRIEVANCE SYSTEMS THROUGH THE NETWORK OF CITIZEN SERVICES CENTRES
NEW DELHI: In its first attempt to analyse public grievances to identify policy gaps and bottlenecks, the Prime Minister’s Office (PMO) has ordered an overhaul of the system to not only improve tracking of grievances but also use them to point out gaps that lead to the grievances. 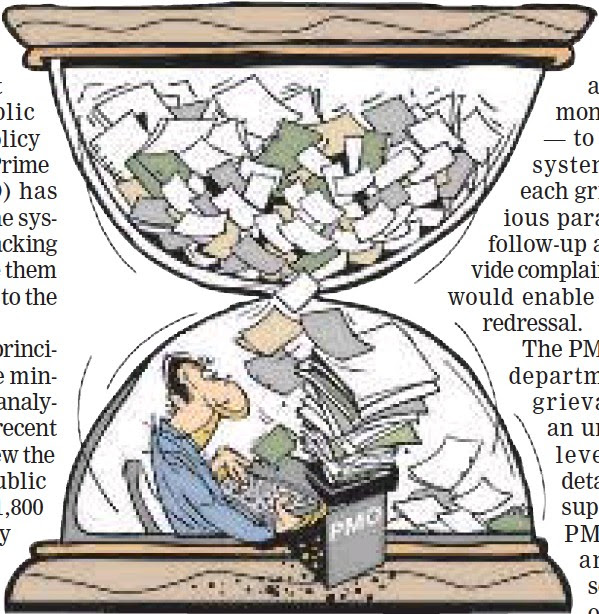 Nripendra Mishra, the principal secretary to the prime minister, ordered the detailed analysis of the grievances at a recent meeting convened to review the working of the PMO’s public wing that receives over 1,800 petitions from people every day.
Soon enough, Mishra figured the PMO’s grievance handling system was a bit of a farce on the lakhs of people that knock his doors annually.
Mishra wondered what purpose the PMO really served since most people — who knocked at their doors — had first approached the ministries concerned and came to the PMO as the last resort.
And all that the PMO had done for decades was to “essentially return these petitions to the very same agencies” and then, never checked to figure out what happened to them.
It was a common sense question but it had taken decades to come. But it triggered the decision of an overhaul, and a detailed analysis of the grievances received by the PMO as well as those received by other central public authorities.
Mishra told the department of administrative reforms and public grievances (DARPG) — which oper-ates a web-based monitoring system — to upgrade their systems to classify each grievance by various parameters, track follow-up action and provide complainants a tool that would enable them to track redressal.
The PMO also told the department of public g rievances to task an under-secretary level of ficer for detailed day to day supervision of the PMO complaints and get a joint secretary-level officer to prepare a monthly analysis report.
“DARPG will also flag sample cases for resolution and also suggestions for improvement in governance based on the above analysis,” according to minutes of the meeting accessed by Hindustan Times.
The Prime Minister’s Office also called for encouraging the poor to access the online grievance systems through the national network of citizen services centres that dot the country and come up with applications to enable people to access the grievance redressal portal using their mobile phones.