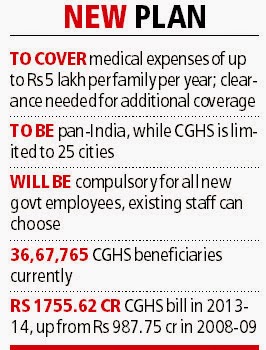 Instead of the government directly paying the medical bills of CGHS beneficiaries, the new scheme will be implemented through insurance companies registered with the Insurance Regulatory and Development Authority and selected through bidding.

Currently, under CGHS, government employees pay Rs 6,000 annually as fixed medical allowance (FMA). The new FMA for beneficiaries is yet to be calculated. While the government’s actual financial commitment will depend on bids and the new FMA, the ministry is working on a presumptive figure of Rs 14,000 per family, which works out to approximately Rs 1,000 crore annually.


The scheme will cover medical expenses up to Rs 5 lakh per family per year. Beyond that, the insurer will have to get clearance from the nodal agency on a case to case basis. An additional sum insured of Rs 10 crore in each of the four zones will be provided by the insurer as buffer for such cases. The CGHS in its present form does not have any annual cap, but each procedure has a prescribed maximum limit for reimbursement. While a note for the Expenditure Finance Committee (EFC) was circulated last year, a fresh proposal incorporating inputs from various departments including the DoPT, erstwhile Planning Commission and Ministry of Statistics and Programme Implementation has been sent to the finance division of the health ministry.

While existing employees can choose between CGHS and CGEPHIS, the new scheme will be made compulsory for new employees.
Sources in the health ministry said the proposal dates back to 2011, when the committee of secretaries gave its in-principle approval.  The proposal was revived after the NDA government took charge. Former Health Minister Dr Harsh Vardhan, however, was opposed to the idea. According to sources, Vardhan was of the opinion that the change would actually mean a higher burden on the exchequer. The annual CGHS bill has increased in the past few years, rising from Rs 987.75 crore in 2008-09 to Rs 1755.62 crore in 2013-14. The average expenditure per beneficiary adds up to Rs 4,787 (which means about Rs 23,000 for a family of five) — Rs 11,955 for pensioners and Rs 2,096 for serving employees.

Under CGEPHIS, the OPD needs will be met by the FMA. While the CGHS covers only 25 cities, the new scheme will be pan-India. This would automatically increase the financial commitment. All diseases, including pre-existing ones, will be covered, and in case of transplants, the expenses incurred for the donor or processing of cadaver organ will also be covered. Interestingly, the Rashtriya Swasthya Bima Yojana, which was run by the labour ministry so far, will be under the health ministry from April 1, as it moves from an insurance-based scheme to a trust-based scheme.
Read at: http://indianexpress.com/article/india/india-others/medical-bill-rising-ministry-plans-to-shift-to-health-insurance-scheme/2/#sthash.VHQFMTMr.dpuf