- October 22, 2015
Dept of Expenditure has advised Banks to issue the acknowledgement at the time of submission of Life Certificates by Pensioners in the prescribed new format given below.Modification in the format of Life Certificate —Issue of Acknowledgement to Pensioners
GOVERNMENT OF INDIA
MINISTRY OF FINANCE
DEPARTMENT OF EXPENDITURE
CENTRAL PENSION ACCOUNTING OFFICE
TRIKOOT-II, BHIKAJI CAMA PLACE,
NEW DELHI-110066
CPAO/IT &Tech/Scheme Booklet/2015-16/1666

Subject:-Modification in the format of Life Certificate —Issue of Acknowledgement to Pensioners.

In this context, to alleviate the hardship faced by the pensioners, RBI has also instructed all the Agency Banks handling government pension payment, vide Notification No.RBI/2014-15/ 587 DGBA. GAD No. H-5013/ 45.01.001/2014-15 dated-07.05.2015 that on receipt of life certificate submitted in physical form, banks to issue duly signed acknowledgement to the pensioners and to enter the same in their CBS immediately and issue a system generated receipt to serve the twin purpose of acknowledgement to the pensioners as well as real- time updation of records.

To facilitate the bank authorities, CPAO has prescribed a modified format of life certificate providing therewith acknowledgement of the receipt of the life certificate vide Correction Slip No.24 to the Scheme for Payment of Pensions to Central Government Civil Pensioners by Authorized Banks. The acknowledgement is a part of the format of Life Certificate, which can be detached and given to the pensioner by the receiving bank. The format (Annexure) has been circulated to all concerned and the same has been made available on CPAO’s website.www.cpao.nic.in” at the link “For Banks”→ Guidelines for Master data.

The Chairmen/Chief Executive Directors of Authorised Banks are requested to ensure that their paying branches follow the above instructions scrupulously without fail.
This issues with the approval of Competent AuthorityEncl:- As above 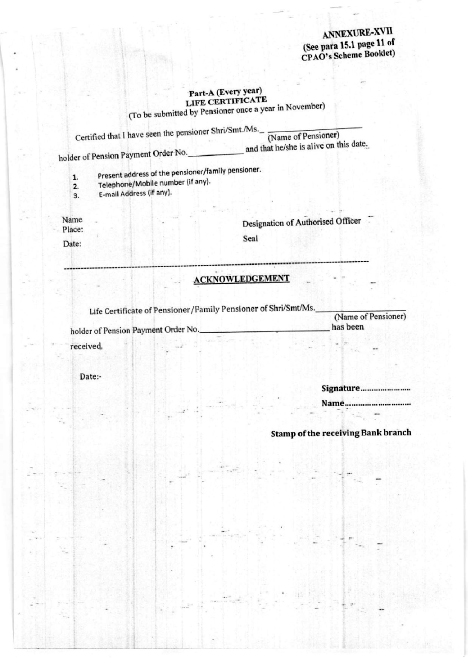