Movement of paperless Pension Payment Orders of revision of pension

Movement of paperless Pension Payment Orders of revision of pension has been implemented in State Bank of India, Punjab National Bank, Bank of Baroda and Canara Bank and only digitally signed e-revision Authorities are being sent to these banks online.

3. For smooth, safe and secure functioning of e-PPO system for sending on line digitally signed revision authorities to banks from CPAO, all the banks are advised to ensure that:-

i) A provision is available in the banks to automatically incorporate the data (XML file) received through e-Revision Authority in their Data Base. It will reduce the time and likelihood of errors in data entry and ensure the correctness of data.

ii) A system of acknowledgement by CPPCs of the daily receipts of the revision authorities sent by CPAO has already been developed and the format of acknowledgement has been prescribed and also put on the website http://eppo.nic.in for the CPPCs (attached for ready reference). Banks are to ensure that acknowledgement are provided by them on daily basis through SFTP. This will enable both CPAO and CPPCs to monitor timely processing of e- authorities.

iii) Daily downloading of updated directory of digital signatures from the CPAO website to ensure the authenticity of officers of CPAO who are digitally signing the revision authorities before processing of cases. 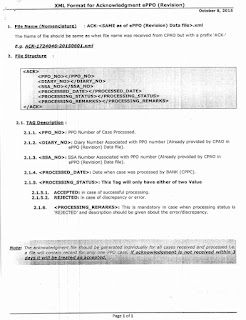