- April 03, 2016
Government employees might soon be given a choice to invest as much as half their contribution towards pension funds in the stock market, against 15 per cent allowed now. These employees are also likely to get an option to select fund managers from private entities, against the current norm of only public sector fund managers. 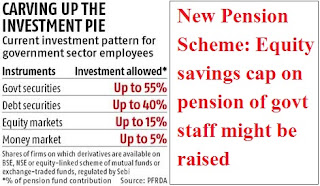 The Pension Fund Regulatory and Development Authority (PFRDA) will invite stakeholders' comments on the proposal in a month's time, after which bids will be called for fund managers based on 'significantly flexible regulations'.

"A lot of changes are going to be made in terms of choices we make available to the government employees over the choice of the investment pattern and fund manager. We are on the verge of finalising it," said Hemant Contractor, chairman of PFRDA.

Contractor added the idea is to give government employees an option to invest up to 50 per cent in equities.

"Our document is ready. We'll put it up for stakeholders' comments in a month's time on this. Investment in equities gives better returns in the long run. We are hopeful it will be approved by the government," said Contractor.

Of the Rs 1 lakh-crore assets under management of NPS, 90 per cent of that falls under the central and state government scheme.

NPS was made available to all citizens from 2009 onwards on a voluntary basis. But, all the central government employees joining the service from January 1, 2004 had to opt for NPS.

The fund managers will likely be appointed for a five-year term instead of three years at present. The move is aimed at providing confidence to pension fund managers to take long-term investment decisions, which could bring in greater returns to subscribers.

The proposal will give confidence to pension fund managers to develop their own business model and decide on the investment they need to put in staffing and infrastructure. Besides, subscribers will feel confident that the manager handling their fund will not get de-registered in three years.

The latest round of bids could see more pension fund managers coming on board. PFRDA is considering a common uniform request for proposal for both the government and the private sector.

In a bid to bring NPS on par with EPF, the government had announced taxation for both the funds, but rolled back the one for EPF following backlash from employees.

The Seventh Pay Commission, headed by A K Mathur, recommended 'exempt exempt exempt' (EEE) status for NPS as well, arguing NPS should be on a par with the EPF scheme in terms of tax-free withdrawal to provide a level-playing field. EEE status means the subscriber would not be taxed at the time of contribution, accretion and withdrawal from the fund.
Read at: Business-Standard