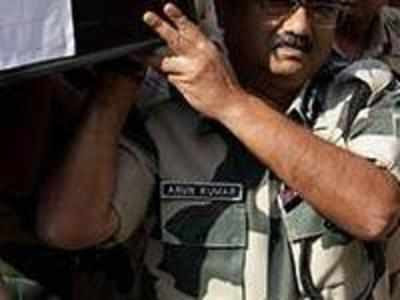 The Indian Army and Border Security Force jawans are involved in daily, deadly skirmishes with the Pakistani army/terrorists. As Amit Lodha, IPS, DIG BSF Jaisalmer, read this piece - Won't cry on son's martyrdom, will keep promise: BSF Jawan's mother - he wondered, do the citizens of this nation really know what the jawan does for his nation?

In this heart-felt piece, he talks emotionally about those who lead from the front and also lauds film actor Akshay Kumar for the manner in which he spoke to the slain BSF martyr Gurnam Singh's family:

"Don't feel sad beta, feel proud that Gurnam has laid his life for the nation." I shuddered when I listened to Bibi Jaswant Kaur, mother of Gurnam Singh, a constable of the Border Security Force, who died fighting terrorists. Such a strong and fiercely proud woman! Gurnam Singh, 26, was the son of a truck driver, Sardar Kulbir Singh. He was instrumental in foiling infiltration attempts in the Jammu sector immediately after the Uri incident. He was specifically targeted by the enemy when he joined the same post again for his duty the very next day. He battled for two days in the hospital but succumbed to his injuries. There are thousands of Gurnams in the BSF, the Army, and all our uniformed services.

But being in a uniformed service, many a time I ponder, for whom does the jawan lay down his life? Are we as citizens worthy of the supreme sacrifice our BSF and Army jawans make? Or the sacrifices of the hundreds of policemen who die performing their duty and even then get pilloried? For that matter, of the lives of anyone in uniform!?

As citizens, do we pay our taxes diligently? Do we respect the law rather than unashamedly breaking rules and feeling good about it? Do we really respect our women, apart from praying to various Goddesses for wealth and power? Why couldn't we pick up a dying Nirbhaya from the road and take her to the hospital, instead of having candle vigils for her later on? Why does it take no less than the Honourable Prime Minister of the country to exhort us to keep the country clean? Then a BSF constable certainly thinks for a moment, are these the people that I am guarding, away from my family on Diwali, worthy of my sacrifice? Are these people really concerned if I am working in subzero temperatures, lighting kerosene lamps and using actual bombs for my Diwali?

I know some people will still think that the jawans are just doing their job and dying in the line of duty is a professional hazard. But you can understand the mindset of a soldier only once you don the uniform.

But then there are the conscientious citizens of our beautiful country from all walks of life who are like a beacon of hope for an occasional cynic like me. Actor Akshay Kumar is one of them. "Amitji, please make me to talk to the family of Gurnam. I want them to know that the entire nation is with them in this hour of grief," said he, calling from the sets in Malaysia. Akshay will always be discussing new ways to take our country ahead. He is always brimming with ideas, particularly for the welfare of jawans. And he walks the talk. He keeps making his contribution to our jawans and kisans in his own way, shunning any publicity. If he is shooting in Kullu, he will specially go and play volleyball with the ITBP constables. Last year, he spent an entire day with the BSF jawans in the scorching desert of Jaisalmer. His presence genuinely reinvigorates the men. He will quietly support the families of the jawans. He had been shooting when Gurnam was martyred. I could sense the pain in his voice, as well as the pride he has for the BSF, the Army, and the Police. After talking to Bibi Jaswant Kaur and Kuljeet, Gurnam's sister, he felt as if he had spoken to his own family. I thanked him for his magnanimity, only to be told that he had done nothing. "Mere paas itna paisa hai, for what. These guys in uniform are the real heroes."

This is not a publicity piece for Akshay. But when a popular personality like Akshay comes forward to support our men, it encourages so many of us Indians to do our bit. And yes, when people like you genuinely feel for our jawans, we know that our countrymen are with us, for us always! There are millions like you which make our nation great.

So, from this Diwali, don't 'donate' to our jawans but contribute to the Nation in your own way.