Trauma in their twilight years-Courtesy THE HINDU 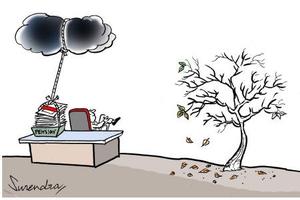 The senior citizens' corner in the pensioners' portal of the Government of India reads as follows: “Senior citizens are a treasure to our society. They have worked hard all these years for the development of the nation as well as the community. They possess a vast experience in different walks of life. At this stage, they need to be taken care of and made to feel special.”
The truth on the ground unfortunately strikes a contrast with the ideals. Very senior citizens among government pensioners feel haunted by “pension woes” in their twilight years due to an indifferent government.
During 1960s and 1970s, a number of well-qualified Central government officials at different levels and grades, including those from the Class I services, moved at the urging of the government from the safe and well-protected government service to the newly formed public sector enterprises (PSEs) where this talent and experience were needed to run the enterprises in a fair and transparent manner. Private sector employees could hardly fit into these organisations, where two different sets of auditors — as well as the Central Bureau of Investigations and the Central Vigilance Commission — were watching from the four corners.
As a small incentive, the government treated the absorption of these officials in the enterprises as in the public interest and had made special provision in the pension rules to allow them, on their absorption in the PSEs, to commute their full pension (instead of the normal quantum of one-third) earned in government service and receive a one-time lump-sum. The government declared that the public sector employees were also public servants like government servants.
These officials absorbed in the PSEs had done a pioneering job in key positions like chairmen, directors, general manager, heads of departments, etc., and toiled to place the enterprises on a strong pedestal within the framework handed to them. Some were given the Padma awards and gubernatorial postings in recognition. When they retired from these enterprises, they had no government pension as they had surrendered and encashed it on joining these enterprises. Most of the public enterprises had no service pension scheme.
On a public interest litigation filed by a New Delhi-based organisation called Common Cause, the Supreme Court after a careful examination of the pension commutation system ruled that it resulted in “unjust enrichment” of the government and granted the restoration of the commuted amount of pension on completion of 15 years after the date of commutation to the government retirees. Subsequently, this benefit was extended by the Supreme Court to the PSE absorbees too, along with full DA on full pension, on a par with the other pensioners. But by an interpretation, only one-third pension was restored under this dispensation. The Supreme Court also ruled that these pensioners should be given all attendant benefits as given to the other government pensioners.
While it was heartening to see the highest court coming to the rescue of and standing by the dedicated senior citizens who had served long years both in the departments and PSEs, what followed later was far from encouraging. The government seemed to feel that this group of pensioners was not entitled to all these benefits, “as they had left the government service.” At each stage and for every small claim, they were met with rejection. Even recently, after giving some enhancement in pension following the Supreme Court's orders, a formula has been devised to withdraw them partially by executive orders in the guise of implementing the Pay Commission's recommendation.
To set right these problems, the PSE's absorbees should again go up to the Supreme Court through the Central Administrative Tribunal and the High Court, and almost in every case, appeals are filed against the lower courts' orders favouring them. The courts have a large pile of pending cases and these senior citizens have neither the vitality to organise such a legal battle nor the deep pockets to shell out formidable legal fees.
In August 2007, a two-member Bench of the Madras High Court gave a speaking order in Ganesan's case detailing the grounds which justify the grant of the balance two-third's pension also to restore the total amount commuted by these pensioners. This decision too has been opposed in the Supreme Court by the Union Government in a special leave petition.
During the last three years, many of this group including Ganesan have passed away. The few hundred surviving pensioners of this 75+age group are eagerly awaiting early orders from the Supreme Court. Many of them are wondering if they would be alive to get the good news.
The government has a choice here. One, it can pursue the cases at leisure, leaving its aging group of former public servants to wither away and die. Or it could take the high moral road and honour, with good grace, the social contract negotiated long ago with its loyal servants of a past generation who answered a call to serve in a tough, untested terrain and gave their best years. This second option will help do justice to the senior citizens in the fag-end of their life in terms of the declared ideals of the government.
(The writer's email is: ptrangamani@yahoo.co.uk)