One Rank One Pension to the Defence Forces personnel.


Subject: One Rank One Pension to the Defence Forces personnel.

The undersigned is directed to refer this Ministry’s letter No 12(1)/2014/D (Pen/Policy)¬Part- II dated 7th November, 2015 notifying One Rank One Pension (OROP) scheme for Defence Forces personnel. Salient features of the scheme have been mentioned at Para 3 & 4 of above said letter with the provision that the benefit of the scheme shall be implemented from 1.7.2014 to all pre-1.7.2014 pensioners. Para 6 of the letter provides that detailed instructions relating to implementation of OROP along with tables indicating revised pension for each rank and each category, shall be issued separately for updation of pension and payment of arrears by Pension Disbursing Agencies concerned.

2. The undersigned is directed to say that in order to quicken the process of revision of pension/ family pension, total 101 pension tables indicating rates of pension/family pension under OROP scheme notified vide this Ministry’s order dated 7th Nov, 2015, are appended to this order. The appended tables indicate revised rates of Retiring/Service/ Special/ Disability/ Invalid/ Liberalized disability/War Injury Pension including disability/war injury element and ordinary/ special/ liberalized family pension of Commissioned Officers, Honorary Commissioned Officers, jC0s/ORs and Non-Combatants (Enrolled) of Army, Navy, Air Force, Defence Security Corps & Territorial Army retired/discharged/invalided out from service/died in service or after retirement. The existing pension of all pre- 1.7.2014 pensioners/family pensioners shall be enhanced with reference to applicable table for the rank (and group in case of JC0s/ORs) in which pension with reference to the actual qualifying service as shown in Column-I of the tables subject to maximum term of engagement for each rank as applicable from time to time. The rate of pension of pensioners/ family pensioners drawing pension more than the rate of revised pension/ family pension indicated in annexed tables, shall remain unchanged.

3. The undersigned is also directed to convey that full pension of PSU absorbees who had opted for 100% commutation of pension, shall also be revised under this order with reference to revised pension of the rank determined for regular category of pensioners. However, there shall be no change in restored amount of pension already notified by respective PSAs in their case.

4. The provisions of this letter shall be applicable to all pensioners/family pensioners who had been retired/discharged/ invalided out from service/died in service or after retirement in the rank of Commissioned Officers, honorary commissioned officers, KO s/ORs and Non-Combatants (Enrolled) of Army, Navy, Air Force, Defence Security Corps, Territorial Army & Ex-State Forces and are in receipt of pension/ family pension as on 1.7.2014.

4.1 The provisions of this order, however, do not apply to UK/HKSRA/KCIO pensioners, Pakistan & Burma Army pensioners, Reservist pensioners and pensioners in receipt of Ex-gratia payments.

5. All Pension Disbursing Agencies (PDAs) handling disbursement of pension to Defence ensioners are hereby authorized to carry out revision of Retiring/Service/ Special/Disability/Invalid/Liberalized disability/War Injury Pension including disability/war injury element and ordinary/special/liberalized family pension of all pre- 1.7.2014 pensioners drawing pension as on 1.7.2014 in terms of these orders with applicable rates of dearness relief without calling for any applications from the pensioners and without any further authorization from the Pension Sanctioning Authorities concerned.

7. Arrears on account of revision of pension from 1. 7 .2014 till date of its implementation shall be paid by the Pension Disbursing Agencies in four equal half yearly installments. However, all the family pensioners including those in receipt of Special/Liberalized family pension and all Gallantry award winners shall be paid arrears in one installment.

8. The initial Pension Payment Order (PPO) or its Corrigendum PPO (Corr PPO) indicates rank,group and qualifying service for which the individual has been pensioned. This information is available with Pension Disbursing Agencies as they have revised pension of all such pensioners in the recent past in terms of Government orders issued for implementation of recommendations of Sixth CPC, CSC-2009 & CSC-2012. In case, however, any information regarding qualifying service, rank, group etc., is not available with Pension Disbursing Agencies, such cases may be referred to Pension Sanctioning Authority concerned on the proforma enclosed as Annexure-A. The Pension Sanctioning Authorities concerned will provide the requisite information from the available records within 15 days of the receipt of request from the Pension Disbursing Agencies.

9. In case of any doubt relating to revision of pension in terms of this order, pension disbursing agencies may immediately take up the matter with nodal officers of respective PSAs details of which shall be notified by Pr.CDA(P) Allahabad in their implementation instructions.

10. The OROP shall be basic pension from 1.7.2014 and therefore, additional pension as applicable to the old age pensioners/ family pensioners on attaining the relevant age (80 years and above) shall also be enhanced by the PDAs from 1.7.2014 or the date from which the pensioner attains the age of 80 years or more, whichever is later.

11. If a pensioner to whom the benefit accrues under the provisions of this letter has died/dies before receiving the payment of arrears, the Life Time Arrears of pension (LT A) shall be paid in the following manner: –

13. No arrears on account of revision of pension/family pension shall be admissible for the period prior to 1.7.2014.

17. An intimation regarding disbursement of revised pension shall be furnished by the Pension Disbursing Agencies to the Office of the Pr. CDA(P) Allahabad in the format prescribed as Annexure¬B to this letter in the following month in which revision takes place. PDAs shall also ensure that an intimation regarding revision of pension is invariably conveyed to the pensioners concerned for their information irrespective of the fact the same is beneficial to them or not. The Public Sector Banks who are disbursing defence pension through Central Pension Processing Centres (CPPC), the progress report shall be furnished by the CPPC of the bank directly to the office of the PCDA (Pensions) Allahabad through electronic scrolls.

18. All other terms and conditions which are not affected by this order shall remain unchanged.
19. This issues with concurrence of Finance Division of this Ministry vide their ID No PC. 1 to 10(11)/2012/FIN/PEN dated 2.2.2016 .

(Manoj Sinha)
Under Secretary to the Govt. of India 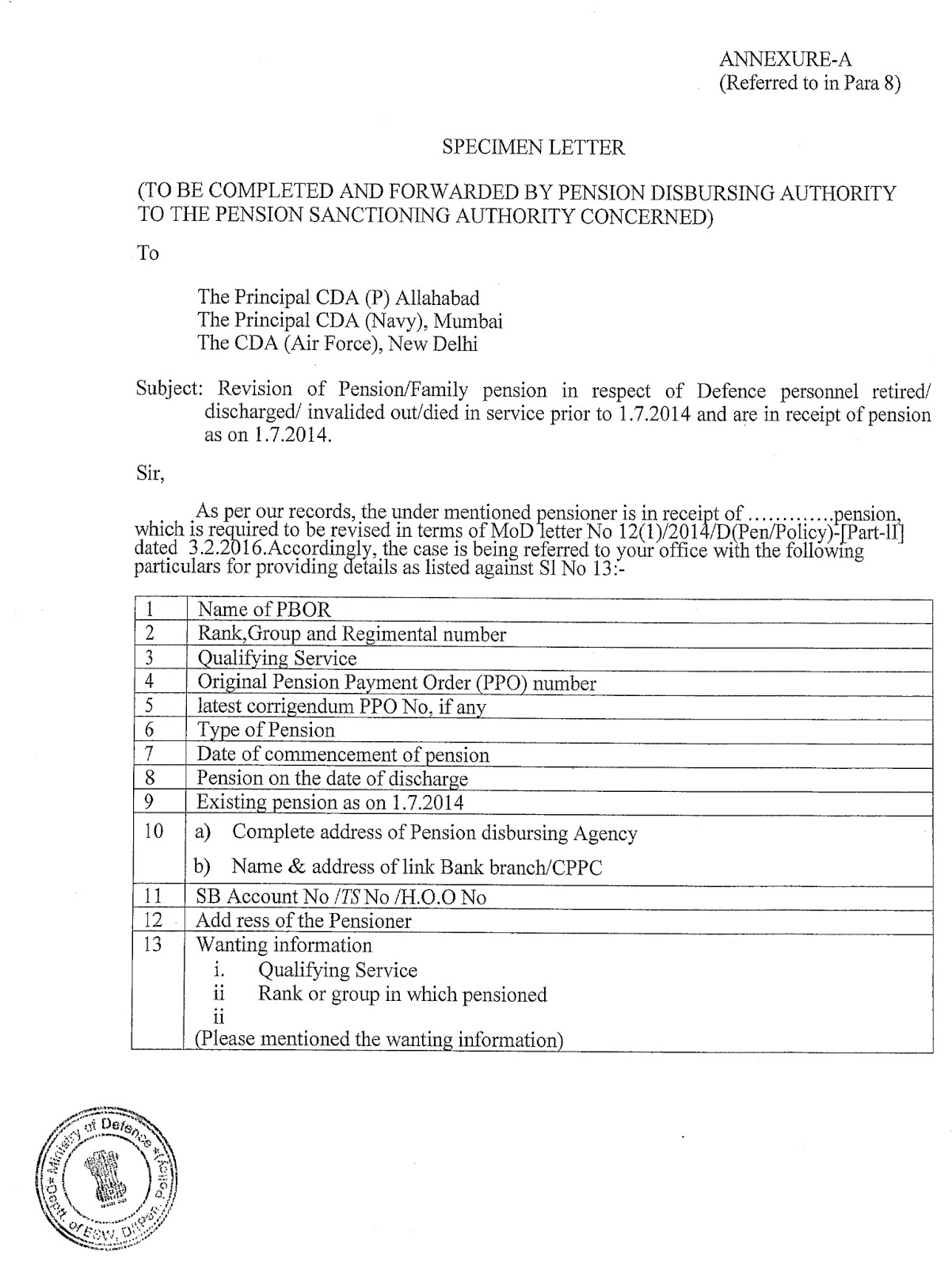 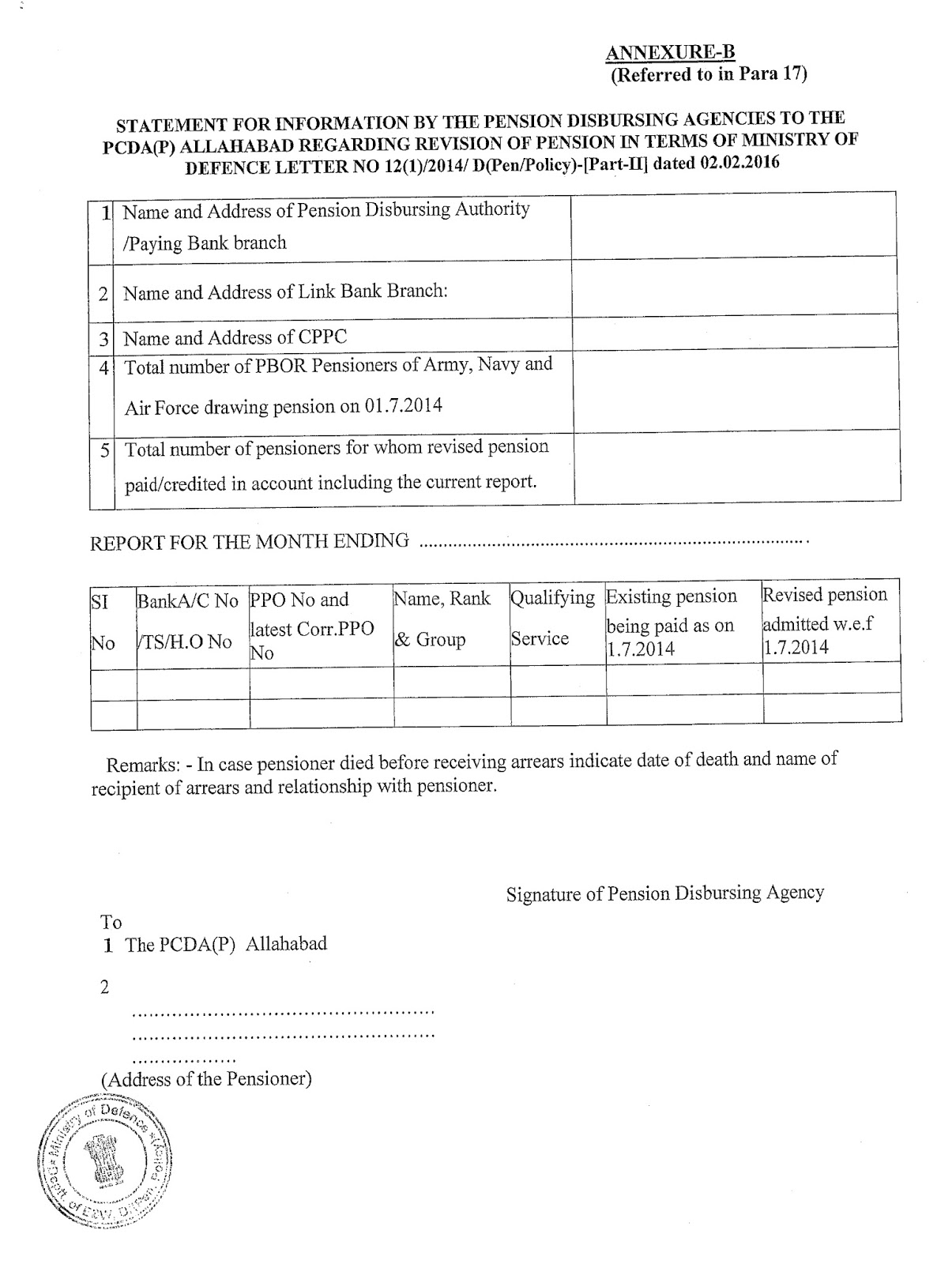 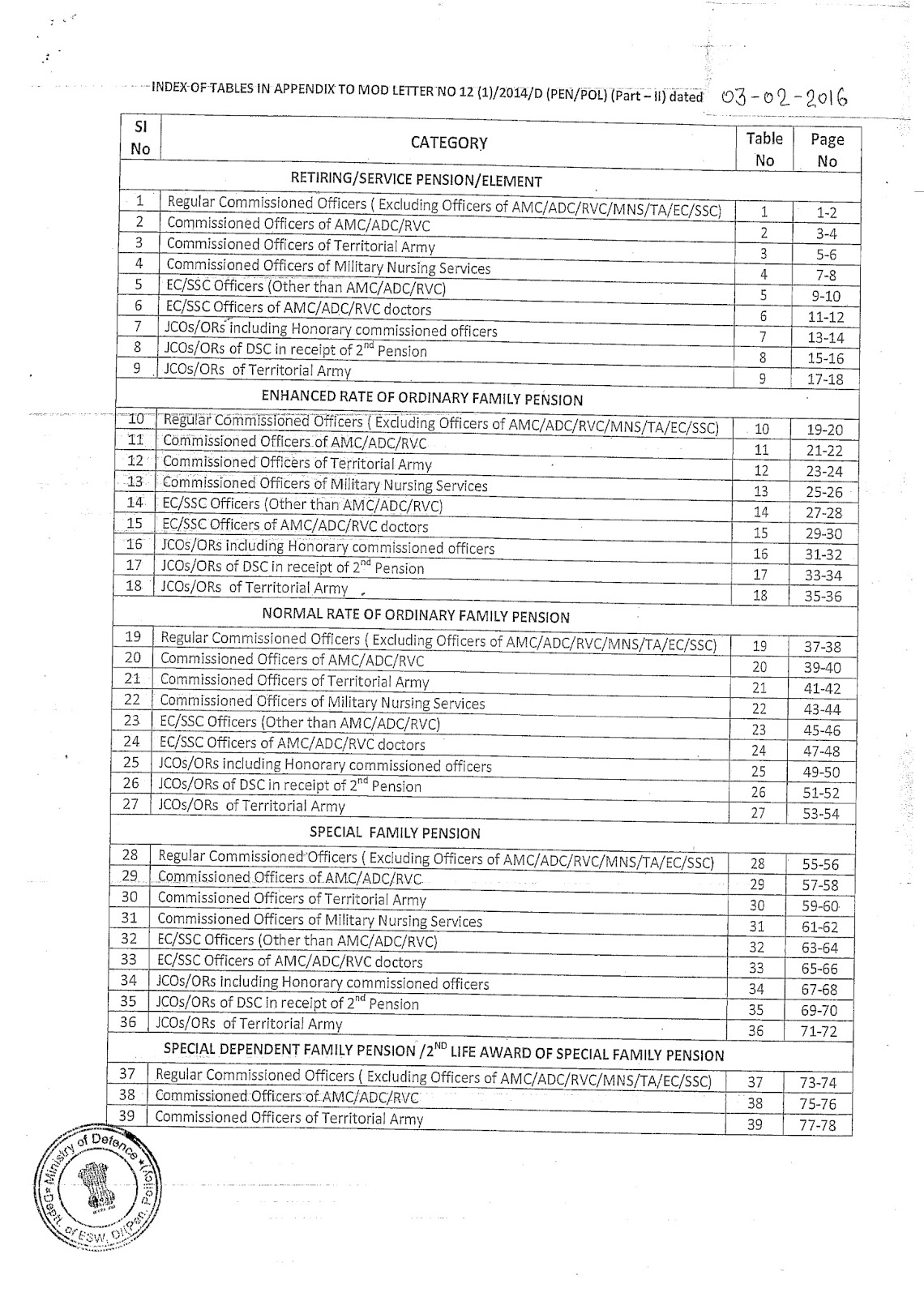 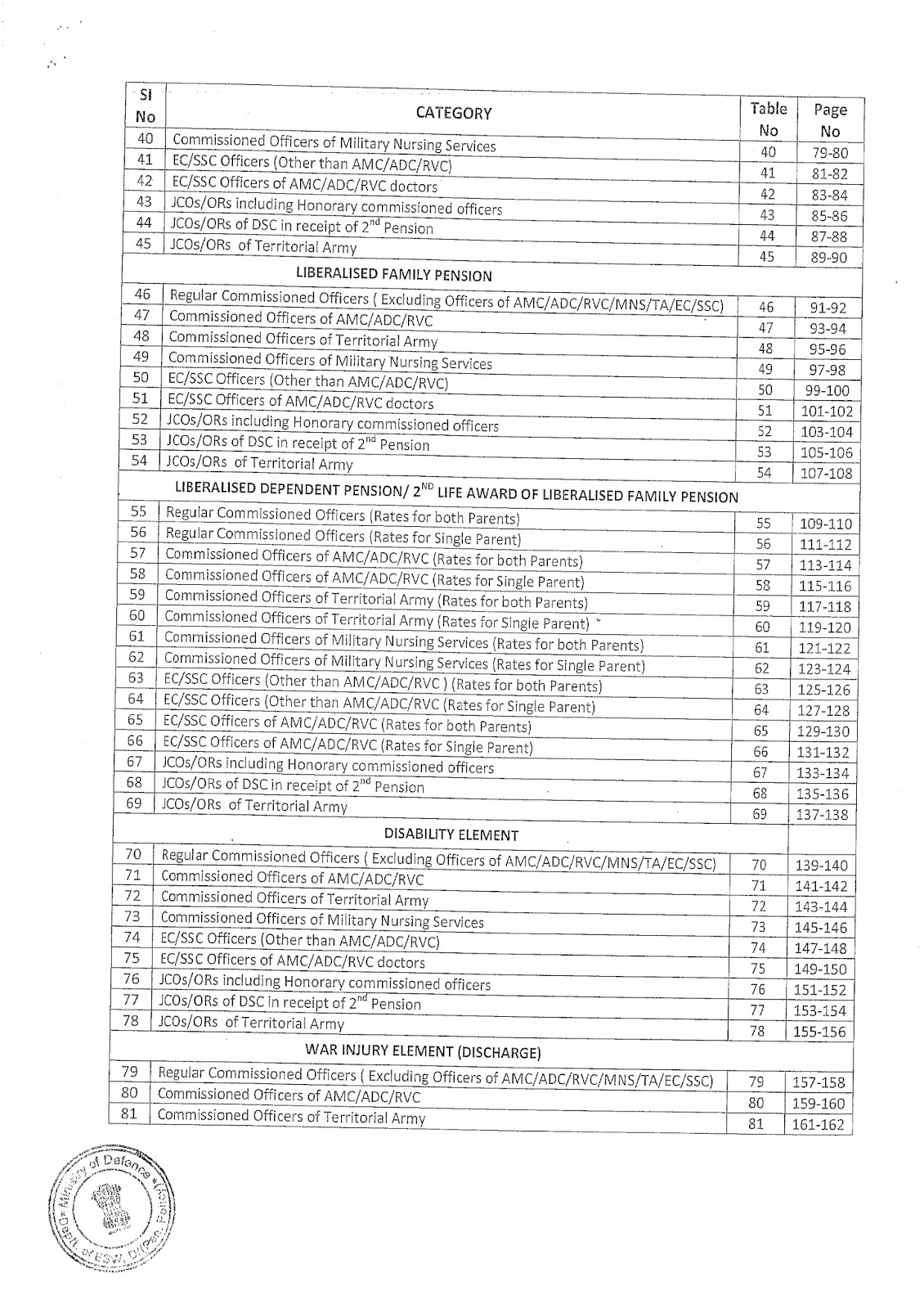 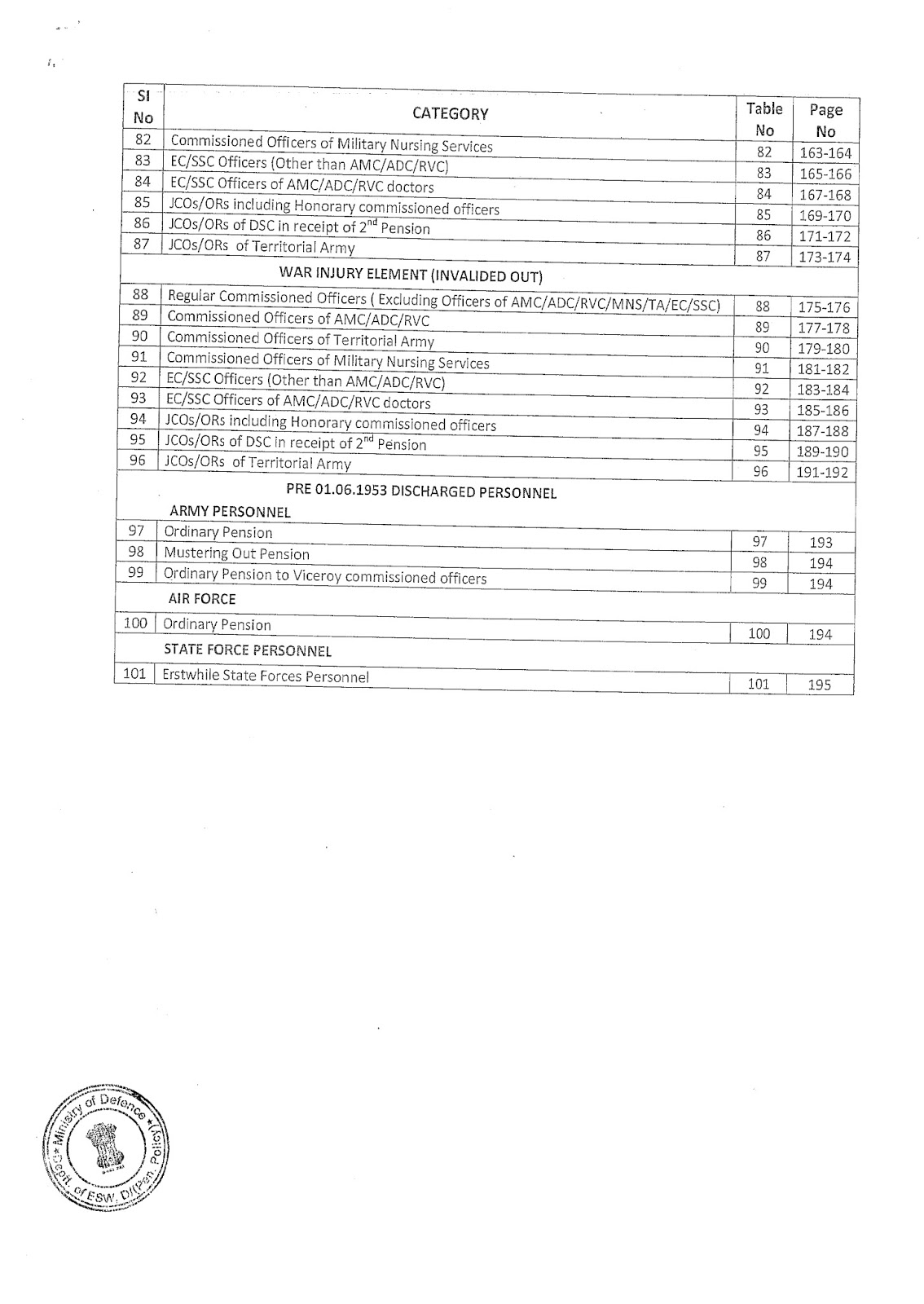