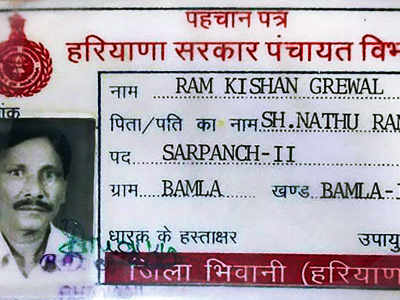 NEW DELHI: Already on the backfoot due to controversies over the moves to slash disability pensions for military personnel as well as downgrade their rank equivalence vis-a-vis civilian officers, the defence ministry scrambled to dig out Subedar Ram Kishan Grewal's service records to hold he was getting pension benefits under the 6th Central Pay Commission (CPC) as well as the 'one rank, one pension' (OROP) scheme.

MoD officials said on Wednesday the 70-year-old Grewal, who retired in September 2004, had got the hikes in his pension both under the 6th CPC of 2006 as well as OROP, which was notified in November 2015. But officials admitted that Grewal had received "a lesser amount than what he should have got" under OROP due to an error in calculation by the SBI bank branch in his hometown in Bhiwani district of Haryana.

"Grewal should have been getting around Rs 2,000-3,000 more in his monthly pension. This is being looked into. For pensioners, the disbursal agency is the bank in which they have an account. When pensions are re-fixed, the tables are given to the banks to calculate and disburse individual pensions. Most of the pension-related complaints are connected to problems with calculation by banks," said an official.

In his letter addressed to defence minister Manohar Parrikar on October 31, a day before he consumed poison on Tuesday, Grewal had claimed he had not got the pension hikes under the 6th CPC, OROP and 7th CPC despite having served in uniform for 30 years and nine months.

Friends of Grewal, who first served for six years in the 105 Infantry Battalion of Territorial Army and then another 24 years in the Defence Security Corps, added that he had been unhappy because the OROP implemented by the government had failed to meet his expectations.

"Grewal did not seek an appointment with Parrikar, nor has the minister's office got his letter of October 31 till now," said an official. Pension benefits under the 7th CPC for all ex-servicemen as also the salaries of serving military personnel are yet to be finalised and disbursed, he added.

Parrikar, on his part, tweeted: "Saddened by the death of Subedar Ram Kishen Grewal. I express my heartfelt condolences. I have asked officials to provide me with details." The MoD, however, was unable to give exact details about Grewal's pension or the hikes he had got over the years.

Holding that "the government was committed to ex-servicemen welfare", Parrikar said Rs 5,507.47 crore had been disbursed under the OROP scheme till now. While Rs 3,867 crore was paid to 19,12,520 ex-servicemen and family pensioners as the first instalment, another Rs 1,641 crore has been given to 11,33,100 veterans as the second instalment.

This comes after the MoD announced last Friday its intention to "re-look" the entire issue of rank equivalence between military officers and their civilian counterparts after a controversial letter issued on the subject earlier in October led to an uproar in the armed forces.

The armed forces are also upset by the move to slash the disability pensions of their personnel for "non-war injuries" by reverting to the earlier "slab-based calculation system", while their civilian counterparts will continue to enjoy the "percentage-based" disability pension regime. "The matter has been referred to the anomalies committee," said the MoD.