The Chief Secretaries of
All States/Union Territories.

Sub: Implementation of Government’s decision on the recommendation of the Seventh Central Pay Commission — Revision of pension of pre-2016 pensioners/family pensioners, etc.— reg.

I am directed to say that in pursuance of Government’s decision on the recommendations of the Seventh Central Pay Commission, the Department of Pension & Pensioners’ Welfare by its OM No. 38/37/2016- P&PW(A) dated 12th May, 2017 (copy enclosed) has issued the necessary detailed order on the above mentioned subject.

admin | May 23, 2017
No.F.14021/3/2016-AIS-II
Government of India
Ministry of Personnel, Public Grievances and Pension
Department of Personnel and Training
New Delhi,
Dated :19/22.05.2017
(i)The Chief Secretaries of All States/UTs
(ii) JS(P), Ministry of Home Affairs North Block, New Delhi
(iii) JS(IFS), Ministry of Environment, Forests & Climate Change.
Subject: Amendments in the recommendations of the 7th Central Pay Commission – reg.
Sir/Madam,
The Ministry of Finance, Department of Expenditure vide Resolution No.1-2/2016-IC dated the 16th May, 2017 has made certain changes in the recommendation of the Seventh Central Pay Commission. The following changes are relevant for All India Service officers:
(i) The Index of Rationalisation (IOR) of Level 13 of Civil Pay Matrix shall be enhanced from 2.57 to 2.67. Accordingly, the Civil Pay Matrix as contained in Schedule-III of IAS (Pay) Rule, 2016 dated 08.09.2016, IPS (Pay) Rule, 2016 dated the 23.09.2016 and IFS (Pay) Rule, 2016 dated 28.09.2016 shall be revised as at Appendix-I (copy enclosed)

(ii) The provision contained in Rule 7 of the aforesaid Rules shall be revised to the extent that the benefit of pay protection in the form of personal pay of officers posted on deputation under Central Staffing Scheme, as envisaged therein, shall be given effect from 1st January, 2016 instead of 25th July, 2016. Further, this benefit shall also be extended to officers from Services under Central Staffing Scheme, coming on deputation to Central Government, on posts not covered under Central Staffing Scheme.
Accordingly, the Rule 7 of IAS (Pay) Rule, 2016 dated 08.09.2016, IPS (Pay) Rule, 2016 dated the 23.09.2016 and IFS (Pay) Rule, 2016 dated 28.09.2016 shall be revised as under:
“If the pay of the AIS officers posted on deputation to the Central Government, is fixed in the revised pay structure, either under these rules or as per the instructions regulating such fixation of pay on the post to which they are appointed on deputation, and happens to be lower than the pay they would have been entitled to had they been in their parent cadre and would have drawn that pay but for the Central deputation, such difference in the pay shall be protected in the form of Personal Pay with effect from the 1st January, 2016”.
Yours faithfully,
S/d,
(Rajesh Kumar Yadav)
Under Secretary to the Government of India
APPENDIX-I
Pay Matrix (w.e.f 01.01.2016) 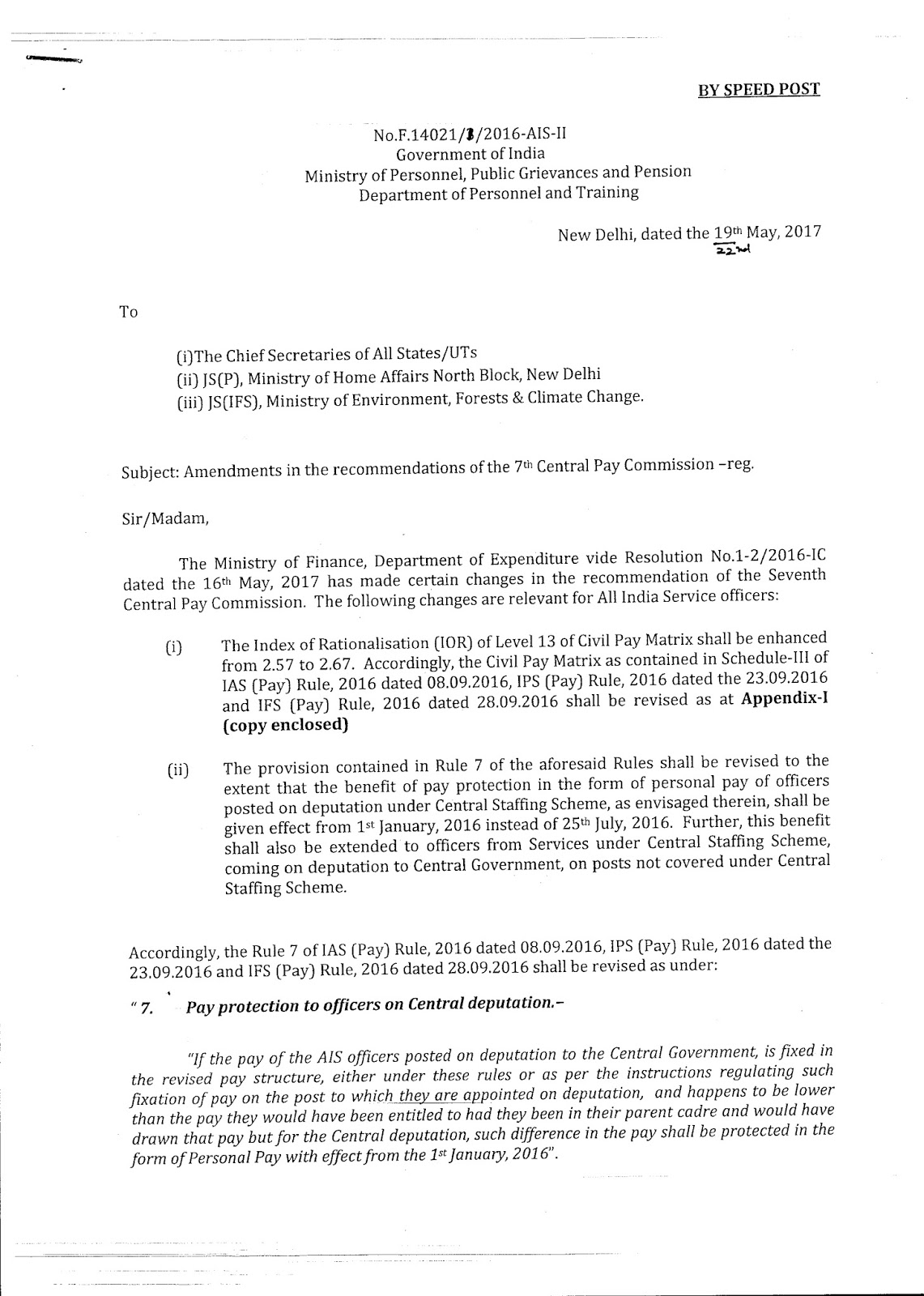 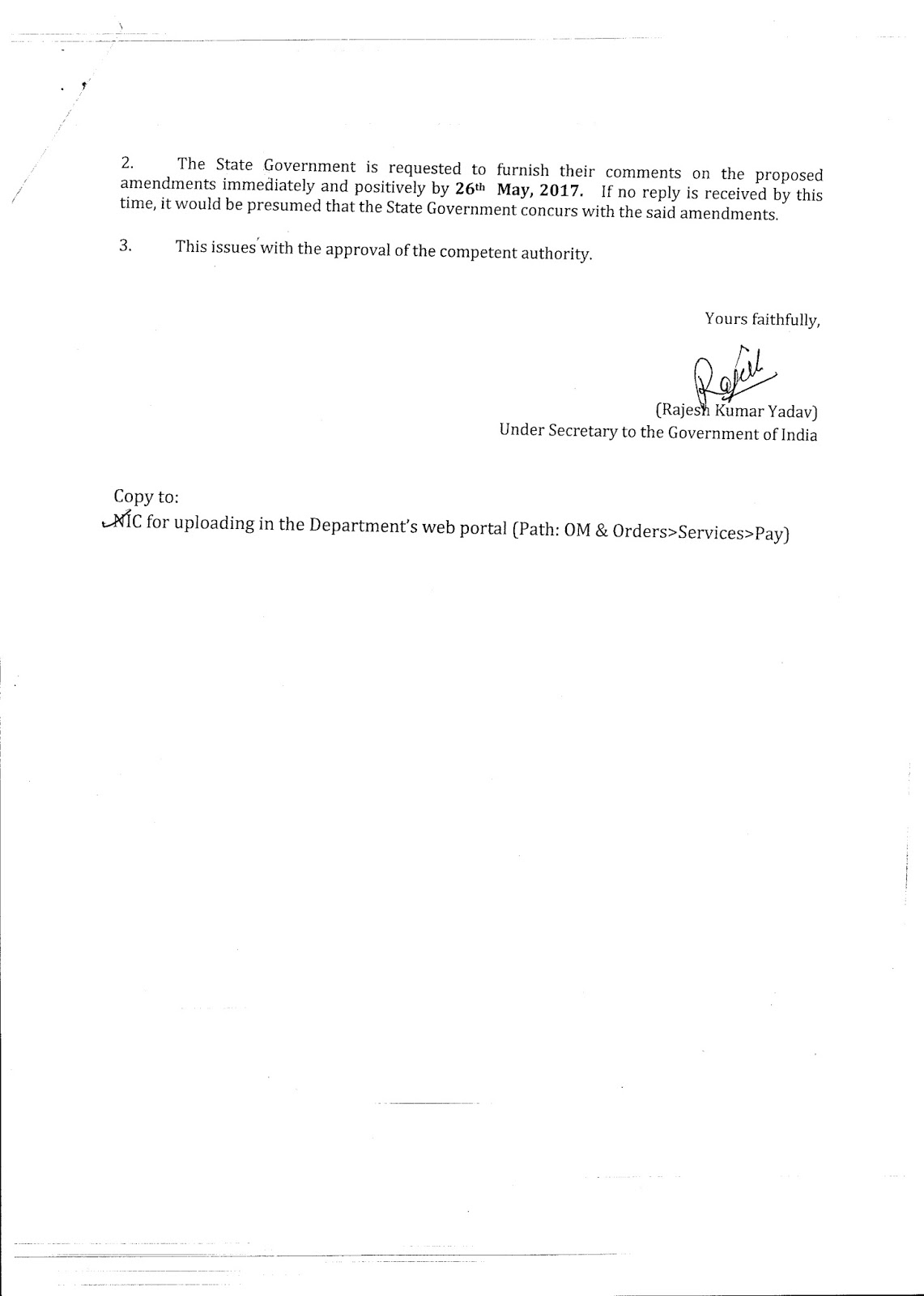 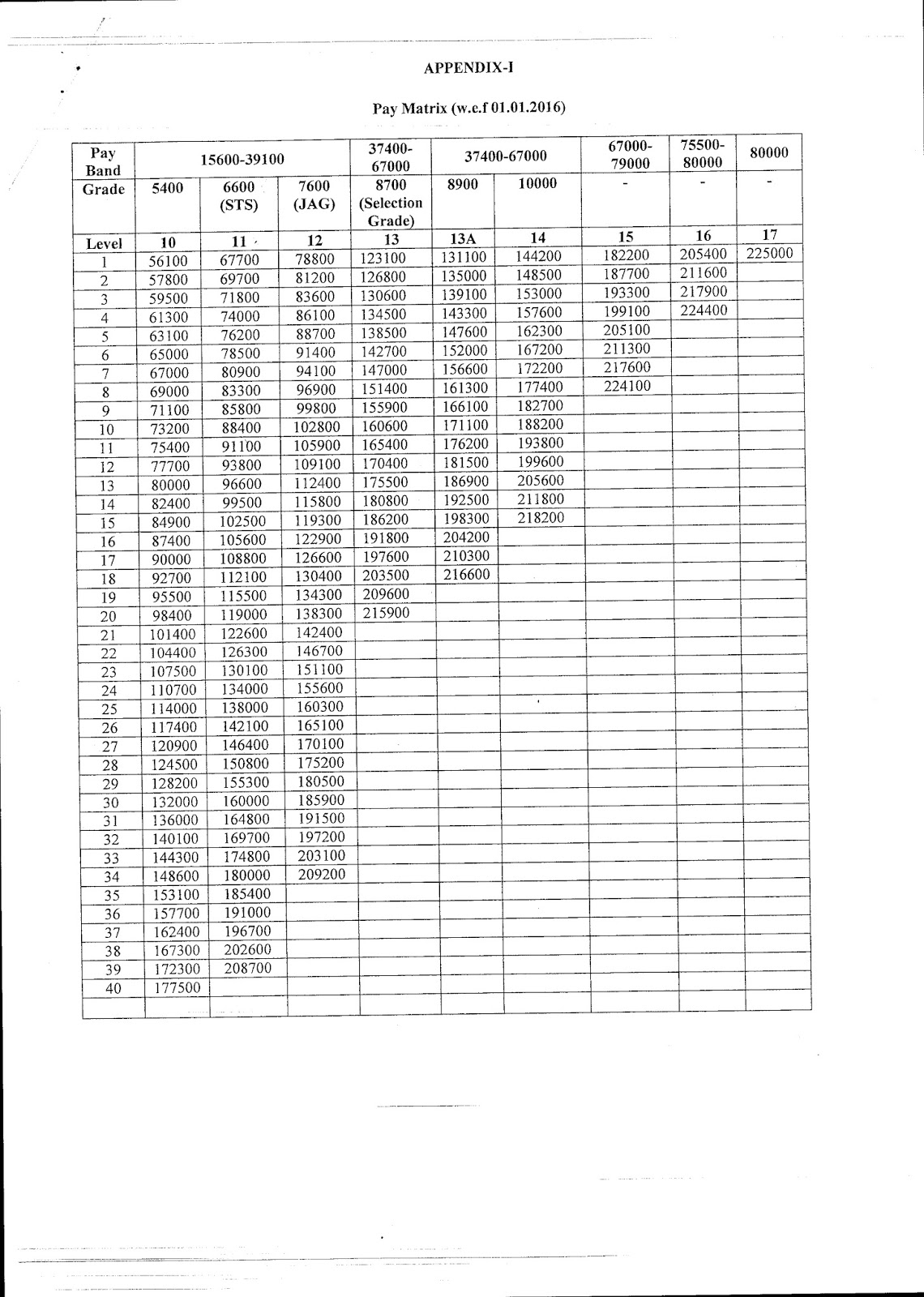