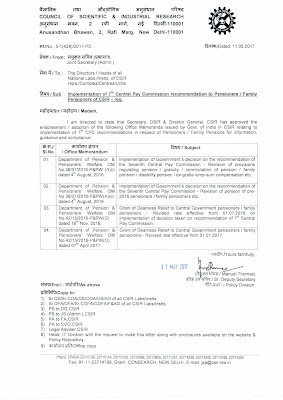 To : The Directors / Heads of all National Labs./Instts. of CSIR Hqrs./Complex/Centres/Units

I am directed to state that Secretary, DSIR & Director General, CSIR has approved the endorsement / adoption of the following Office Memoranda issued by Govt. of India in CSIR relating to implementation of 7 th CPC recommendations in respect of Pensioners / Family Pensions for information, guidance and compliance: