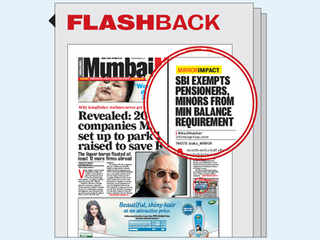 Mirror's September 26 report on SBI's decision to ease the balance rule for pensioners
Bank exempts retirees from minimum balance norms, but won't return money it docked from their accounts earlier. Charges have hit those with no other income hard, finds Alka Dhupkar.

A day after State Bank of India eased the controversial minimum balance requirement for pensioners, it faced furious reactions over the decision to not reimburse the charges it has docked from the retirees' accounts since June.
It had deducted penalties from accounts which had a monthly average balance of less than Rs 5,000. A large number of pensioners in Mumbai receive less than Rs 1,000 every month and the deductions have shrunk their deposits, forcing them to dip into their savings for medicines and other expenses.

Neeraj Vyas, chief operating officer of SBI, said the minimum balance exemption for pensioners would come into effect from October. "Till the time, whatever amount has been deducted for not maintaining the monthly average balance will not be reimbursed," he said.


The exemption will be applied from October. Till the time whatever amount has been deducted for not maintaining the monthly average balance will not be reimbursed.
-Neeraj Vyas, Chief Operating Officer, SBI