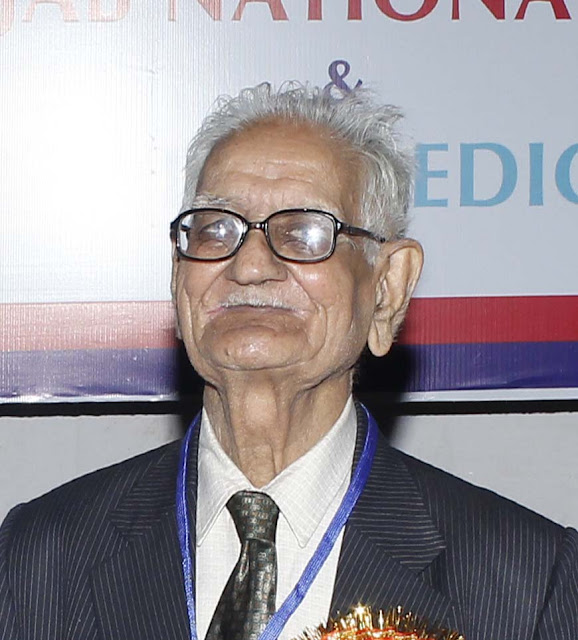 AN ODE TO LUDHIANA
OUR REJUVINATORS & BPS
Respected Chief Guest, Special Guests of Honour, Special Invitees and esteemed Delegates to this 62nd AGM at the historic but today’s throbbing industrial city of Ludhiana, I extend my heartiest greetings to all of you ! My first landing at Ludhiana was after more than two months behind the tragic Partition of 1947 when a crowded train, from an Attock Refugee Camp in Pakistani Punjab, terminated here on the 24th October, the historic day when it was decided by the then Maharaja of Jammu & Kashmir, Sir Hari Singh, to sign the accession of J&K to India and just after two days, the Indian Army landed there to defend India from the Pakistani aggression. I was not aware of these developments at that time, the only thing I remember is that the sight of the hundreds, if not thousands, of dead corpses lying on the banks of Sutlej, was extremely shocking and they were spreading such a heavy and bad stench that compelled my mother, two younger sisters and myself to run, away from Ludhiana as early as possible. My second visit, about a decade been to this bubbling industrial capital of Punjab whose proud, skilled, talented and hard-working proletariat, and the patriotic bourgeoisie owning the factories, produce the largest numbers of bicycles and motor cycles in the whole world. Secondly, it is the glorious city of freedom fighter martyrs. Today, though physically unable to participate here on account of my old-age bed-ridden illness, most humbly I convey my homage to the great revolutionaries, not only of the Punjab but of the whole of the country, SUKHDEV THAPAR and KARTAR SINGH SARABHA who valiantly embraced the gallows in the cause of freedom of India from the slavery of the British Empire. I, also take this opportunity to pay my full tributes to the great revolutionary and popular poet, Sahir Ludhianavi who achieved great success in Bollywood in the mid-20th century and who was bold enough to take pot shots even at the great builder of the greatest symbol of love in the world, the beautiful TAJ MAHAL where he agonied for the poor:
Ek Shahansha ne daulat ka sahara lekar hum gharibon ki mohabbat ka udaya hai mazaq!
Taking advantage of great wealth, an Emperor just ridiculed the love of people like us, the poor !
Tu Hindu banega, na Musalman banega Insaan ki aulad hai, insaan banega !

Thou shalt be neither a Hindu nor a Muslim
You are the progeny of just plain human beings
And shall, therefore, become just one more Human Being !

Next, I would pay my glowing tributes to late Vidya Sagar Goswami who retired as Deputy Chief Engineer, All India Radio (Akash Vani) in 1975 and whose Birth Centenary we should be celebrating today as he was born in November, 1917. He was one of the stalwarts who along with P N Kumra, Bool Chand (ICS), P N Gadi, Parduman Singh, Mangal Sain Sachdeva (IA&AS), C L Mohan, Y C Rai and others brought, in 1983 the ailing headquarters of Bharat Pensioners Samaj from New Rajinder Nagar, New Delhi to Jangpura. They were able unitedly to renew, rebuild and re-establish this historic organization founded by Retd Justice Shankar Saran of Allahabad High Court at the reported suggestion of the then Prime Minister Jawahar Lal Nehru himself. Goswami finally became President of Bharat Pensioners Samaj in 1996 and died in harness in April, 1998. He prodded me to devote my retired life to the selfless and noble cause of welfare of pensioners. Hence, I pay my regards and glowing tributes to him when I finally lay down the office of President, Bharat Pensioners Samaj today as very graciously the Managing Committee agreed to accede to my request at its meeting held at New Delhi on 24.06.2017.
Pensioners were, for first time, brought under the purview of a Central Pay Commission (4th) by Late Prime Minister, Rajiv Gandhi when a notification in this regard was issued in October, 1985. Till then wholly neglected, Pensioners were at this stage bestowed, wef 01.01.1986, with two new benefits, namely, 6-monthly increase in Dearness Relief @ the same rates and conditions as for the serving employees and 20% fitment enhancement formula. At about the same time, they were also made eligible for CGHS facility. These were big boosts for the pensioners’ movement then under the leadership of P N Kumra & others mentioned above. But the biggest boost came with the 5th CPC while aggressively seeking full parity, BPS asked the chair Justice Pandian to accede to our demand, he was persuasive and assured us that he would grant us “modified” parity in the first instance and that, after this first success we could ask a subsequent CPC to make it is full” And we agreed. When a favourable political situation arose at the time of its implementation, To and behold, we were able to get a 40% fitment formula extracted from, and later implemented by, the United Front Government. We also achieved a Fixed Medical Allowance @ Rs 100 pm. As we said at that time: This was something that was: BHUTO NA BHAVISHYATE -- never happened in the past not likely to happen in the future! Of course, the UPA-I Govt had no choice but to repeat (and implement) the same formula of 40% in 2008. We got the multiply basic pension by 2.26 formula for minimum pension.

The VIth CPC acceded to another long-pending demand for grant of “additional pension” for the older pensioners. As is now well-known, we got 20% increase at 80, 30% @ 85, 40% @ 90, 50% @95 and 100% @100. Of course, CPC - VII has improved it to 2.57 and also granted “Full Parity” i.e. Option 1 which has unfortunately been denied to us by the powers that be today. Our fight for “Option 1” will continue. As Swami Vivekanand exhorted us: “Arise, Awake and Stop not till the goal is reached!” And last, but not the least, as CPC - V and CPC - VII forcefully pleaded for integration (and universal availability irrespective of the Deptt the pensioner belonged to before retirement) of all Central Govt Health Schemes like CGHS, RELHS, ECHS, ESIC, etc. which could become a nucleus for a national health scheme in the future. But Secy Genl will tell you more about CPC - VII and thereafter.
And, here I take leave of all of you. Individuals come and go but the business of this ethereal world goes on, on and on! As the great Ghalib said : Ghalib-e-Khasta Ke Baghair, Kaun se Kaam Band Hain – The business of the world goes on even after any one departs! But before I proceed further, I may incidentally add ¾ before I say good bye that: To err is human, but to forgive divine.
I must conclude with the words of one of the great world leaders of the previous century, namely, to guard and protect the unity of your organization “like the pupils of your eyes.” In the recent past, there was some unfortunate breach of this golden principle, of which I too must share some blame for lack of more discussion rather than falling in the pit of emotional debate; on my own introspection, I consider that even high provocation is no justification for any paucity of calm discussion in a democratic organization in the Democratic Republic of India to which all of us are proud to belong. But I do fervently hope that other friends and colleagues would retrospect on their part too. Thus, we may be able to go own ways in a more pleasant atmosphere.
Al vida ! BPS, Al vida !