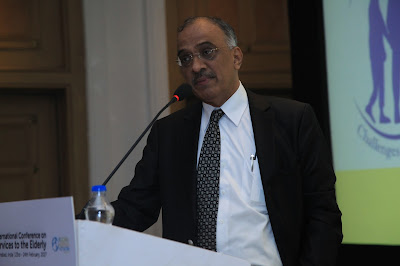 At the outset, I wish to thank the organisers of today’s event to invite me to share my experiences and thoughts having been involved in the cause of senior citizens since 1994, when I was 40 years old. I have grown with you all over these years and thank you for hand holding. I wish to express my deep sense of gratitude to every one here for blessing me to take on the responsibility to serve the elderly in India and globally. At Heritage and Kshetra Hyderabad, we provide services while nationally and internationally, I have been involved in representing the care and development of elderly with the Government of India and some states, the United nations, WHO and so on. I remain indebted to representatives of many countries to have given me the opportunity to serve the Board of International Federation on Ageing, of which Bharat Pensioners is a member, and to serve the Board as its Global President during 2012-14. I had the honour of addressing the United Nations, Parliament in Brazil, White House Conference on Ageing in 2005 among many other international meetings in several countries.

I wish to place on record my personal appreciation to Mr. Shyam Sunder and Mr. Maheshwari and other stalwarts for their untiring efforts to espouse the cause of the members relentlessly over decades and thank them for inviting me here.

“Ageing Societies: Challenges and Opportunities” published by BUPA Health Plus with London School of Economics as a partner in 2010. The study reported that the consequences of ageing most feared by respondents are loss of independence and the loss of memory. The reported found respondents had lower levels of fear of dementia in India and China, where its incidences are less common than in other other countries in the study. The results also show higher levels of fear of dementia amongst older people, where incidences of dementia are most common.

A majority of respondents from India, Brazil, Italy and Russia has suggested that family should have the primary responsibilities over looking after dependent older people. Given the risk that older people in need of care might need to deplete their assets in order to pay for their care, a public debate is growing internationally regarding the importance of developing mechanisms to protect the financial resources of older people in need.

The UN research estimates that the last 60 years have brought a 21-year increase worldwide in life expectancy at birth, from 47 years in 1950-1955 to 68 years in 2005-2010. Whereas countries like the USA and the UK have seen life expectancy increase by approximately 10 years over the period, middle income countries such as Brazil, Mexico, India and China have experienced increases in excess of 20 years. Typically, the onset of dependency in old age in most developed countries occurs after 80 years of age. In the Bupa health pulse survey, nearly half of respondents (47 per cent) over 65 felt that old age started after 80, the average life expectancy of most developed countries now. Around a fifth of respondents of all ages felt that 80 years old marked the boundary into old age. Furthermore, 72 per cent of respondents aged 65 and over did not perceive themselves as old.  Over half (51%) of people haven’t prepared for old and – and a significant proportion feel they will need to draw from their liquid assets to meet their care costs. While many of us in India planned to buy a house, jewellery and getting our children married, we never anticipated the increase our longevity though we have been managing our lives reasonably well, barring some unfortunate ones.

In the UK, unlike previous generations, those between 60 and 69 do not see themselves as old with two-thirds planning to learn or do something they have never done before. Many do not consider themselves elderly until they hit 85. And for more than one in 10 old age now starts even later at around 90. In fact, people aged 60-plus are looking forward to their 70s as a golden age of travelling, volunteering, keeping fit and having the time to spend with family and friends.  Computer literacy, second career, travelling, volunteering is gradually gaining the attention of Indian senior citizens.

Children migrate and we encourage them to do so: Therefore, adopt your lifestyles

For children inching closer to accomplish their goals and dreams become a reality, they leave behind the biggest treasure – their parents. Though many after decades of living separately not all them think what they lost in life and for them life moves on. But the older generation carry an untold story of loneliness, anxiety, fear and uncertainty between the smiles and the cheerful exterior. The anxiety of being away from one's children in times of illness and emergencies sets in. Chores and errands such as going to the bank, standing in queue for a gas cylinder or paying a bill become a challenge. Going to the doctor becomes an ordeal. They are lucky if still fit and healthy to live on their own and if other children live close by. Spending time with grandchildren can be challenging as they may not understand their 'foreign' accents and if the grandchild does not speak their language, they feel disappointed. Community services are the only best option for them. There are new organisations that are setting up such services.

71 per cent of elderly population resides in villages while 29 per cent is in cities. The life expectancy at birth during 2009-13 was 69.3 for women as against 65.8 years for men. At the age of 60, average remaining length of life was found to be about 18 years (16.9 for men and 19.0 for women). In rural areas, 66 per cent of elderly men and 28 per cent of elderly women were working, while in urban areas only 46 per cent of elderly men and about 11 per cent of elderly women were working. In rural India, the family system is eroding, with the younger generation increasingly heading off to cities with their spouses and their children to start a new life – without their parents or grandparents. When the old persons are unable to work and _ economically contribute to the family, abuse starts. Elderly parents being abused and abandoned is not just an urban phenomenon.
The Maintenance and Welfare of Parents and Senior Citizens Act, 2017 is being reviewed by the Government and many stakeholders were consulted and a revised draft is getting ready and we wonder it it may be placed before the Parliament this winter session.

Life expectancy at 60, the age at which most working Indians retire, is higher at 77.2 for men and 78.6 for women. As medical technology improves over the next 20-30 years, you can expect to live to 85-90, if not a 100. Can you afford to? If you have planned your retirement till a fixed age, say 75, and you outlive that figure by a decade, you will fall victim to what is known as longevity risk.  That’s what the bodies like AIPA and such national bodies are espousing to protect them decay.  The efforts of pensioners organisations indeed are laudable.

Increased medical expenses is only one part of planning for old age. All other expenses will also balloon due to inflation. If we assume an inflation of 7%, a modest annual expense of Rs 3 lakh now for a 30-year-old will mean Rs 96 lakh when, 80. While calculating retirement needs, medical expenditure must be a major factor. The cost of healthcare and the ever changing and developing healthcare delivery will make it more expensive. Unlike earlier generations who joined the workforce immediately after graduation at age 20 or 21, the demand for higher education has meant the age at which one starts to work is now 25 or more. Therefore, the need to save more in lesser time unless the retirement age is increased.

In respect of those not able to pay for treatment, the National Programme for Healthcare of the Elderly is the best option. Efforts are being made to cover more districts while there are many criticisms about its implementation.

In India, a very few private company employees have pensions. A recent report released by CRISIL, only 8 percent of employees who retire from the private sector in India are covered by pensions and hence 92 percent have no income security.  It is important for all the key stakeholders such as the government, regulators, employees and employers to engage in a focused and constructive discussion to explore new ways to broaden and deepen pension coverage in India. As people with decades of experience and wisdom, we must all take efforts to keep educating our children to protect their interests post retirement.

The employer pension plans survey carried out by KPMG in India clearly establishes the importance of tax incentives provided by the government to increase enrolment in pension plans and stimulate higher contributions to them. National Pension Scheme (NPS), a government-sponsored pension scheme, was launched in January 2004 for government employees. It was opened to all sections in 2009. However, it is yet to take the desired shape in terms of wide coverage.

Trembling hands can no longer sign on bank cheques and wills. The octogenarians and nonagenarians afflicted with arthritis in their wrist joints, others with Parkinson's disease, and those who suffer from almost complete memory loss due to various kinds of dementia including Alzheimer's disease are completely dependent on others.  According to RBI guidelines, banks should send officials to the homes of elderly account holders and take their thumb impressions with a witness present. But banks often claim to be too short-staffed and ask the guardians of these senior citizens to secure a doctor's certificate that the account holder can no longer sign due to health issues. The doctor has to witness the thumb impression being affixed by the account holder before signing the certificate. The relatives and friends, in the absence of children may not be able to come to their rescue always.