ZoomBookmarkSharePrintListenTranslate
NEW DELHI: Seeking to assuage concerns of depositors, the finance ministry on Tuesday defended the bail-in provision in the Financial Resolution and Deposit Insurance (FRDI) Bill, 2017 and said the provision will only be used sparingly. 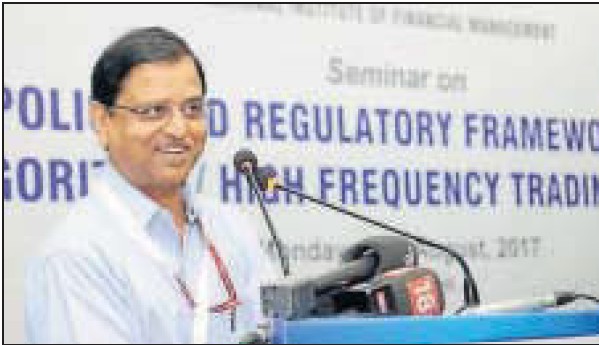 MINT/FILE■ Subhash Chandra Garg, secretary in the department of economic affairs in the finance ministry

The ministry also said the bail-in provisions are unlikely to be ever used for state-run banks, as it sought to assure investors that their deposits in banks are secure.
Subhash Chandra Garg, secretary in the department of economic affairs in the finance ministry, tweeted that existing safeguards for depositors will increase under the provisions of the bill.
“Bail-in will be only sparingly used. Public sector banks will effectively not be subject to bail-in provisions. Depositors need not have any apprehensions,” he wrote on Twitter.
The FRDI Bill aims to limit the fallout of the failure of institutions like banks, insurance companies, non-banking financial companies, pension funds and stock exchanges.
The bail-in clause has been proposed as one of the resolution tools in case of the failure of a bank, wherein the depositors will have to bear a part of the cost of the resolution by a corresponding reduction in their claims. This had stoked fears that deposits could be used to bail out failing banks.
The FRDI Bill 2017 was tabled in the Lok Sabha in August, following which it was referred to a joint parliamentary committee. The committee will submit its report on the last day of the upcoming budget session and the bill is then likely to be tabled in Parliament only in the monsoon session.
The provisions of the bill, especially related to bail-in and insurance of deposits, has been opposed by trade unions and many opposition parties that have termed it anti-people and anti-poor.
A finance ministry statement said insured deposits of banks cannot be used in case of bail-in. added that the bail-in instrument designed by the regulatory body—the Resolution Corporation—will be subject to government scrutiny and oversight of Parliament. Cancellation of the liability of a depositor beyond the insured amount will be possible only with the prior consent of the depositor.
“Bail-in power can be used in a judicious and reasonable manner only by the Resolution Corporation and it will have to ensure that all creditors, including uninsured depositors, get at least such value, which they would have received in the event of liquidation of a bank,” the statement said, adding that depositors will have the right to get compensation from the Resolution Corporation in cases where the depositors of a bank get less value than that they would have got in case of liquidation of the bank.
The statement added that deposits up to ₹1 lakh will continue to be insured under the bill. Rights of uninsured depositors will be better protected after the passage of the bill, the statement said.


Want your bank deposits safe? Be ready to pay for it

Want your bank deposits safe? Be ready to pay for it

Press Information Bureau
Government of India
Ministry of Finance
07.12.2017
07-December-2017 13:49 IST
Provisions of the Financial Resolution and Deposit Insurance Bill, 2017 meant to protect interests of depositors
The Financial Resolution and Deposit Insurance Bill, 2017 (FRDI Bill), introduced in the Lok Sabha on August 11, 2017, is under consideration of the Joint Committee of the Parliament. The Joint Committee is consulting all the stakeholders on the provisions of the FRDI Bill. Certain misgivings have been expressed in the media regarding “bail-in” provisions of the FRDI Bill. The provisions contained in the FRDI Bill, as introduced in the Parliament, do not modify present protections to the depositors adversely at all. They provide additional protections to the depositors in a more transparent manner.

Presently, each depositor of banks can be only protected up to a limit of Rs. 1 lakh by the guarantee of the Deposit Insurance and Credit Guarantee Corporation (DICGC). Remaining deposits (i.e. beyond Rs. 1 lakh of deposits in a bank) do not have any deposit protection guarantee and are treated, at par with claims of unsecured creditors as of now. Besides providing similar protection / guarantee of Rs. 1 lakh to depositors, as it exists today, the rights of uninsured depositors are being placed at an elevated status in the FRDI Bill compared to the existing legal arrangements over the unsecured creditors and even Government dues.

The FRDI Bill is far more depositor friendly than many other jurisdictions, which provide for statutory bail-in, where consent of creditors / depositors is not required for bail-in.

Indian Banks have adequate capital and are also under prudent regulation and supervision to ensure safety and soundness, as well as systemic stability. The existing laws ensure the integrity, security and safety of the banking system. In India, all possible steps and policy measures are taken to prevent the failure of banks and protection of interests of depositors (e.g. issue of directions / prompt corrective action measures, capital adequacy and prudential norms). The FRDI Bill will strengthen the system by adding a comprehensive resolution regime that will help ensure that, in the rare event of failure of a financial service provider, there is a system of quick, orderly and efficient resolution in favour of depositors.