1. EPS'95: Pensioners: Implementation of Bhagat Singh Koshiyari Parliamentary committee’s report regarding amendment to EPS 95:
Sir, Bhagat Singh Koshyari Parliamentary was constituted on the petition of Sh Prakash Javadekar then MP & Patron of EPS 95 Pensioners/family pensioners & Now Hon’ble Minister HRD in your Govt.. On 24.2.2014 in Dharna organized by Bharat pensioners Samaj in coordination with EPS 95 Pensioners National Co-ordination Committee. Sh Prakash Javedkar, then BJP MP & now Hon’ble Minister HRD, had declared, “If my party comes to power, Bhagat Singh Koshyari committee report shall be implemented in TOTO within 3 months”, Sir, now its going to be 4years since Sh Prakash Javedkar’s party is in power. The poor pensioners /family pensioners who relentlessly worked for your victory in 2014 are feeling cheated as implementation of Bhagat Singh Koshyari committee report is still not implemented. Bharat Pensioners Samaj appeal to you to full fill the promise without further delay;
ii). EPS' 95 pensioners are not being granted DR at all to negate the  inflationary affect neither they are being provided any  Health-Care facilities.  Bharat pensioners Samaj appeal to you to grant them full Dearness Relief  at par with other Central Govt Pensioners at least from the date of constitution of Bhagat Singh Koshyari committee and to provide full heath-care coverage honoring the judgement of the Hon'ble Supreme Court in the matter of Consumers Education & Research Centre And Others Vs Union of India ( AIR  1955- SC 922). Health of elderlies can hardly be ignored.

2.  Extension  of  benefit of 7th CPC and DR revision to the pensioners of all Autonomous Bodies & PSUs:
Sir, upto 6th CPC all benefits of pay commissions accepted recommendations s & Dearness Relief revision were granted to all autonomous bodies Pensioners along with working employees .7th CPC benefits though have been extended to working employees of all these bodies and pensioners viz.
i. Central Power Research Institute ,
ii.    Council of Scientific and Industrial Research,
iii.    Bureau of Indian Standards,
iv.    Coir Board ,
v. Khadi and Village Industries Commission,
vi. Indian Council of Agricultural Research (ICAR) ,
vii.Indian Council of Medical Research. But these benefits have not been extended to the pensioners of other autonomous bodies like  Coffee Board, Rubber Board, Tea Board, etc. This is unjust and discriminatory and violates Article 14 of the constitution. You are, therefore, requested to intervene and order extension of benefits of 7th CPC and DR revision uniformly to the pensioners of all autonomous bodies.

3.Extension of benefit of Honourable Supreme court judgements on service & pension  matters to all similarly placed persons without pushing each one of them to the court to seek redressal on the same grievance/issue :
Sir, as of now Honorable Supreme court judgements are extended only to appellants /litigants and each of the other similarly placed pensioner/family pensioner in the evening of their lives are being pushed to the courts seeking redress of the same issue/grievance inspite of supreme courts repeated pronouncements “ It is a settled principle of law that when there are similarly situated persons, the Government should on its own grant the same relief to the others and should not force similarly situated employee to approach the court".This is not only causing harassment to elderly but has made Govt as the largest litigant increasing avoidable workload on already over loaded judiciary.

It is therefore, appealed that through a general order it be made mandatory for all Ministries & Departments to extend the benefit of legally settled issue of Service and Pensionary matters to all similarly placed persons.

4. Restore option one for revision of pension of pre2016 pensioners as recommended by 7th CPC : Pensioners are anguished on denial of Option-1 recommended by 7th CPC for revision of pension on flimsy grounds that records of about 18% pensioners are not available. Records, wherever not traceable, can be reconstructed. It is unjust to deprive over 80% pensioners of the benefit for the sake of about 18%. It is requested to revisit the issue and to restore option one as a 3rd option.

i) Sir, NOTIONAL PAY CONCEPT IS BASED ON THE ASSUMPTION THAT ALL THE EMPLOYEES RETIRED PRIOR TO JAN.2016 , WERE DEEMED TO BE IN SERVICE TILL JAN. 2016 AND THEIR NOTIONAL PAY IS CALCULATED FOR CALCULATING PENSION.

As per extant instructions, 30% pay element is reckoned for in service benefits and 55% pay element is reckoned for retirement benefits. How then the emoluments i.e. basic pay+ 55% which is worked out only for the fixation of pension at the time of retirement can be taken as reference pay for working out notional pay PC to PC. It appears that Directorate  of Pay commission, Railway Board has intentionally drawn this inference just to deprive Running staff of the benefit of 30% pay element for working out Notional pay  PC to PC. Bharat Pensioners Samaj appeal the issue be revisited to do justice to  Rlys running staff ;

b) Discrimination in Health-Care: As pointed out in earlier communication vide No SG /BPS /H/2017/5                    dated 25.12.2017 (copy attached), though both Rly Pensioners & central civil pensioners belong to Central Govt. Services, Central Govt Civil Pensioners are getting better health care facilities through CGHS than the Railway’s RELHS beneficiaries. Till date RELHS beneficiaries have not been issued smart cards similar to CGHS beneficiaries for cashless treatment in emergencies in empaneled hospitals. Recently a pilot project for issuing Smart cards only  in Metro cities & Delhi NCR is launched under ‘CTSE’ wherein additional amount of Rs 6000 to 30000/ is being demanded from RELHS beneficiaries who have already paid the prescribed amount at the time of their retirement or on their joining RELHS subsequently. Moreover, even all those who wish to join the scheme by paying additional amount are unable to do so because of several unresolved glitches in the scheme for registration.Bharat pensioners Samaj therefore appeal to you :

.i) To either merge RELHS with CGHS or to provide quality health care services at par to the beneficiaries of both the schemes;
ii) To provide without asking for any additional amount, Smart cards for cashless treatment in any empaneled hospital in the country to all the existing RELHS beneficiaries,;
c).    On Indian Railways Unmarried/Widow/Divorced Daughters and Handicapped dependent Children of pensioners and family pensioners are facing harassment & exploitation in getting pension sanctioned on their turn. No uniform procedure is being followed. Kindly prevail upon the Ministry of Railways to issue consolidate simplified instructions for the sanction of pension in time bound manner to Unmarried/Widow/Divorced Daughters and Handicapped Dependent Children of pensioners and family pensioner on their turn; and
d).       Process of revision of PPOs of pre-2016 is very slow. So far not even 50% of revised PPOS have been generated. Moreover, not even 10% of PPOs generated so far have been actually dispatched to PDAs for payment. Kindly prevail upon Ministry of Railways to hasten the process so date super Sr citizens get the benefit during their life time.
6. Regarding State Pensioners: Presently there is no uniformity in the methodology for sanctioning pensionary benefits to the pensioners of State Governments relating to DCR Gratuity, Dearness Relief, age related additional pension, fixed Medical allowance etc. vis-a-vis Central Govt. pensioners. Pensioners are a homogenous class and any discrimination of pensionary benefits is uncalled for. Bharat Pensioners Samaj appeal to you to kindly ensure uniformity & equality.

Thanking you,
With regards.
Yours truly, 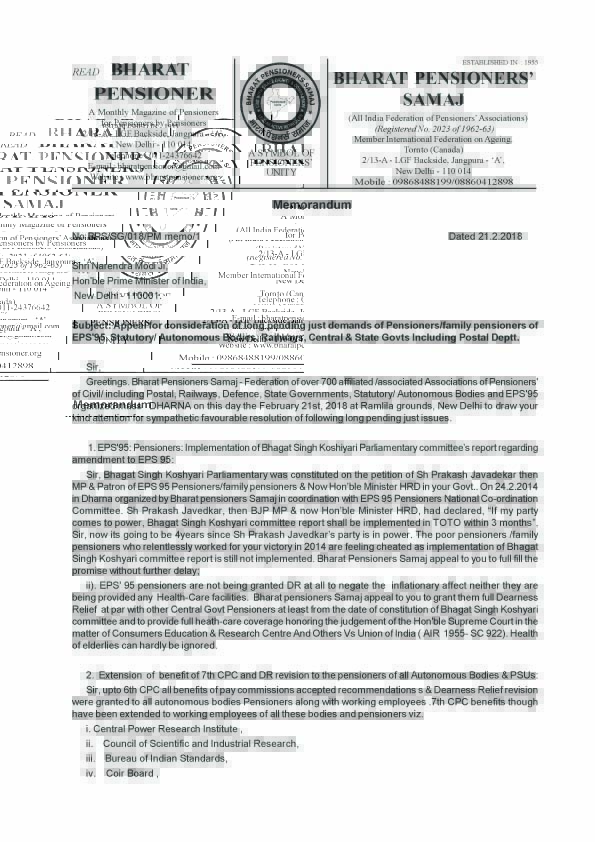 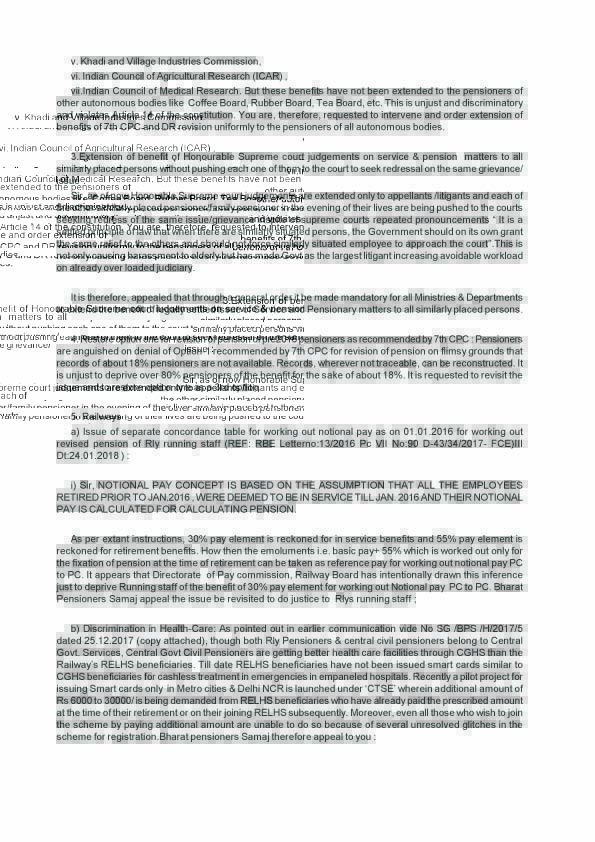 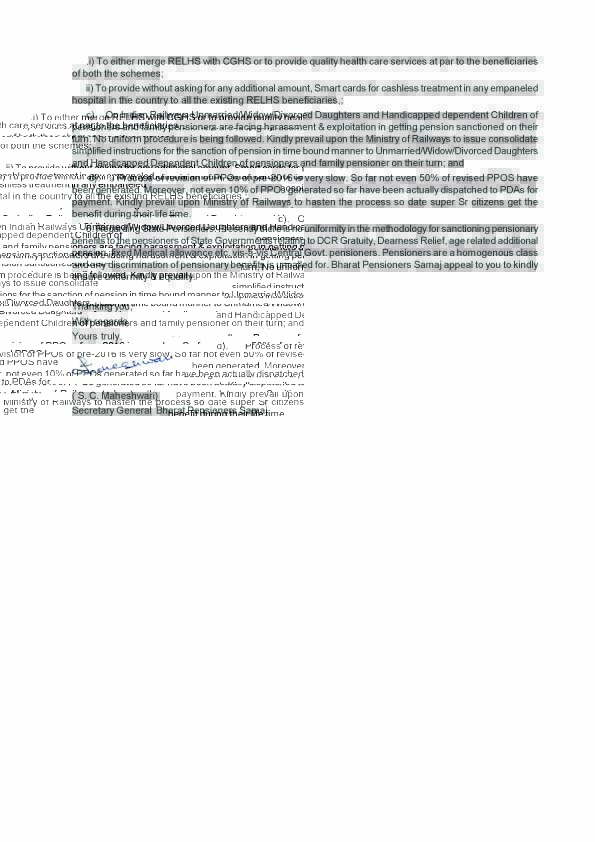 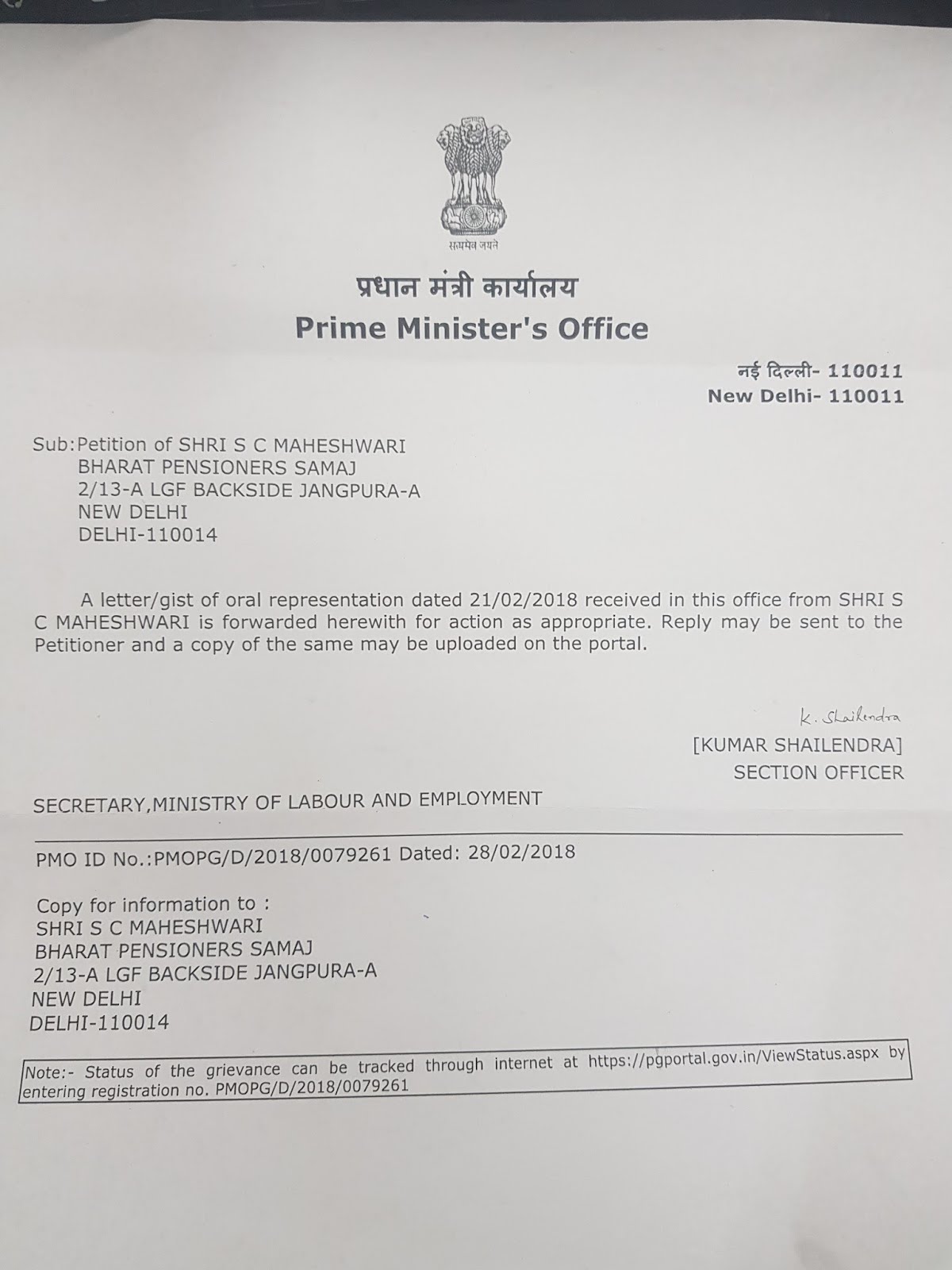