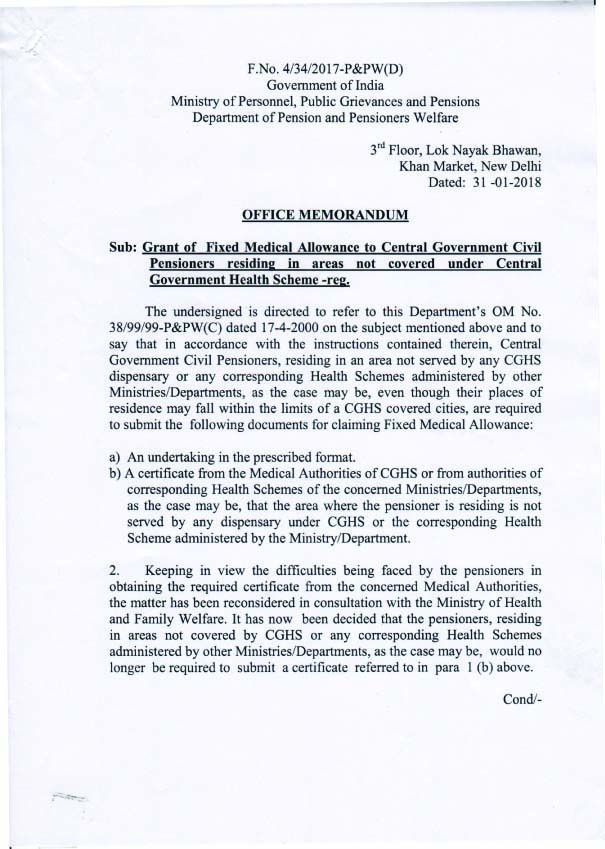 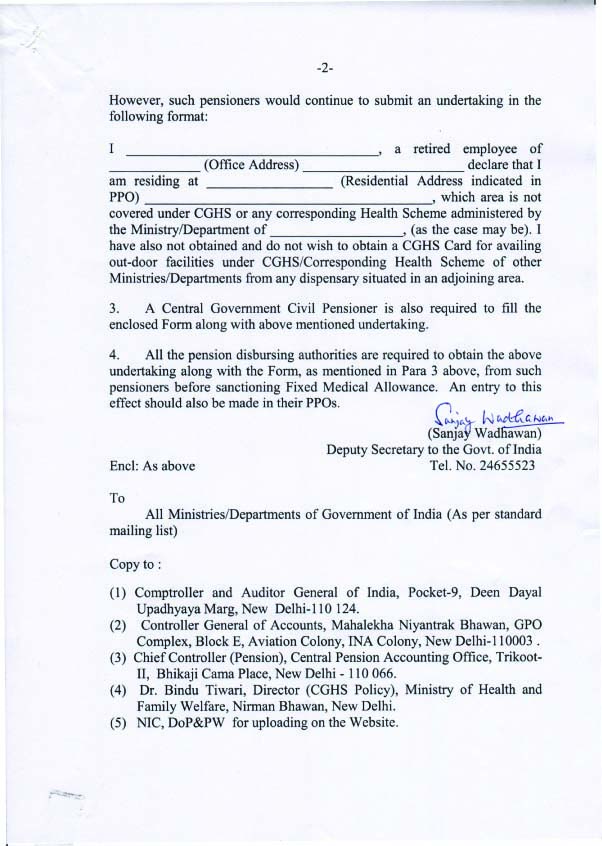 The undersigned is directed to refer to this Department’s OM No.38/99/99-P&PW(C) dated 17-4-2000 on the subject mentioned above and to say that in accordance with the instructions contained therein, Central Government Civil Pensioners, residing in an area not served by any CGHS dispensary or any corresponding Health Schemes administered by other Ministries/Departments, as the case may be, even though their places of residence may fall within the limits of a CGHS covered cities, are required to submit the following documents for claiming Fixed Medical Allowance:
a) An undertaking in the prescribed format.
b) A certificate from the Medical Authorities of CGHS or from authorities of corresponding Health Schemes of the concerned Ministries/Departments, as the case may be, that the area where the pensioner is residing is not served by any dispensary under CGHS or the corresponding Health Scheme administered by the Ministry/Department.
2. Keeping in view the difficulties being faced by the pensioners in obtaining the required certificate from the concerned Medical Authorities, the matter has been reconsidered in consultation with the Ministry of Health and Family Welfare. It has now been decided that the pensioners, residing in areas not covered by CGHS or any corresponding Health Schemes administered by other Ministries/Departments, as the case may be, would no longer be required to submit a certificate referred to in para 1 (b) above.
However, such pensioners would continue to submit an undertaking in the following format:
I , ______________ a retired employee of _____ (Office Address) ___________ declare that I am residing at _______________  (Residential Address indicated in PPO) ________________, which area is not covered under CGHS or any corresponding Health Scheme administered by the Ministry/Department of , _________________________ (as the case may be). I have also not obtained and do not wish to obtain a CGHS Card for availing out-door facilities under CGHS/Corresponding Health Scheme of other Ministries/Departments from any dispensary situated in an adjoining area.
3. A Central Government Civil Pensioner is also required to fill the enclosed Form along with above mentioned undertaking.
4. All the pension disbursing authorities are required to obtain the above undertaking along with the Form, as mentioned in Para 3 above, from such pensioners before sanctioning Fixed Medical Allowance. An entry to this effect should also be made in their PPOs.
Sd/-
(Sanjay Wadhawan)
Deputy Secretary to the Govt. of India