Subject: Setting up of Anomaly Committee to settle the anomalies arising out of the implementation of the Seventh Pay Commission’s recommendations — extending the scope of definition regarding.

The undersigned is directed to refer to DoPT’s Office Memorandum of even number dated 20/02/2017 on the subject as cited above, and to incorporate the following further modification in the definition of what would constitute an anomaly:

2. With the incorporation of the above para in the OM, the definition of anomaly will read as follows:-
(1) Definition of Anomaly
Anomaly will include the following cases
a) Where the Official Side and the Staff Side are of the opinion that any recommendation is in contravention of the principle or the policy enunciated by the Seventh Central Pay Commission itself without the Commission assigning any reason;
b) Where the maximum of the Level in the Pay Matrix corresponding to the applicable Grade Pay in the Pay Band under the pre-revised structure as notified vide CCS(RP) Rules 2016, is less than the amount an employee is entitled to be fixed at, as per the formula for fixation of pay contained in the said Rules;
c) Where the Official side and the Staff Side are of the opinion that the vertical and horizontal relativities have been disturbed as a result of the 7th Central Pay Commission to give rise to anomalous situation.
d) Where the amount of revised allowance is less than the existing rate or any other anomaly observed while implementing the revised allowance
3. The rest of the contents of the OM issued by DoPT under reference no. No.11/2/2016-JCA dated 16.08.2016 shall remain unchanged.
sd/-
(D.K.Sengupta)
Deputy Secretary (JCA) 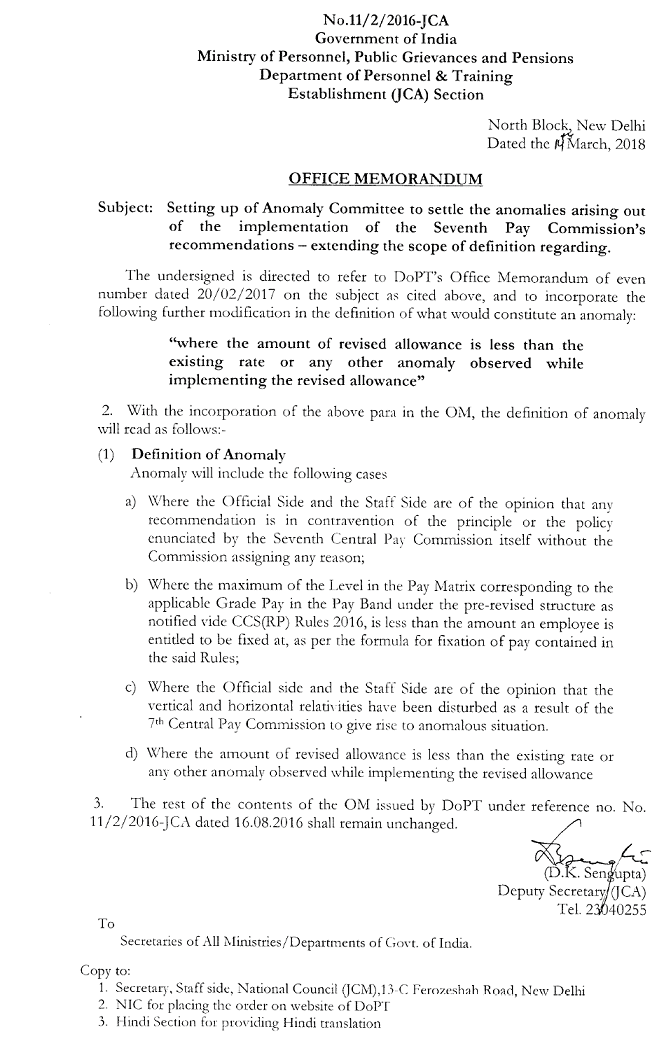