The Supreme Court’s scathing criticism of the government’s litigation policy and practices is well deserved, as the conduct of governments, both at the Centre and in the states, is a major cause of obstruction of justice. The government is the country’s most prolific litigant and 46% of the pending cases in courts have been filed by governments. The Centre is to be blamed more than the states as it is clear from the court’s observation that "the couldn’t-care-less and insouciant attitude of the Union of India has gone too far". Cases are filed again and again even on the same issue. The court’s comments were occasioned by the third batch of appeals over a similar question of law in the same matter. The court had dismissed the first batch in December, the second batch in March this year with a fine and the third batch was now before it. Such unnecessary litigation is common, and not an exception.
A very large number of disputes which can be settled departmentally or even ignored are taken to courts by the government. The decisions on various dispute settlement forums are not accepted and appeals are made. The fear of being questioned later and of enquiries and actions makes officials take even silly issues to court and appeal against all unfavourable decisions, especially those relating to money. The cost of litigation may be more than the amount involved in the dispute. Sometimes cases are instituted just to harass people or other parties like NGOs, and at other times to extract bribes or favours. The government has an array of legal manpower and infrastructure and so the cost is no consideration. But, as the court noted, the burden is on the ordinary citizen who has to spend a "small fortune" to get justice.
The result is that the cases clog the courts and all cases are delayed causing injustice to ordinary litigants. A National Litigation Policy was drawn up in 2010 which was intended to make the government an "efficient and responsible litigant" and to reduce the pendency of cases in courts from 15 years to three years. The policy was revised in 2015 and again, as the court noted, "Nothing has been finalised for the last about eight years". Delays are caused not just by the governments’ itch for litigation but by other factors like shortage of judges, cumbersome court procedures and practices, and other reasons. But they can be reduced greatly if governments restrain themselves and avoid all unnecessary, vexatious and frivolous litigation. That will promote the cause of justice which now finds undermined in many ways.

The Supreme Court of India.

NEW DELHI: "The couldn't-care-less and insouciant attitude of the Union government with regard to litigation has gone a little too far," the Supreme Court said and castigated the Centre for repeatedly filing appeals on identical questions of law despite being fined earlier for clogging the justice delivery system with frivolous cases.
Ticking off the Centre for snail-paced efforts to streamline its litigation policy, a bench of Justices Madan B Lokur and Deepak Gupta recently used the NDA government's reformist slogan of "ease of doing business" to make a sharp point. "Under the garb of ease of doing business, judiciary is being asked to reform. The boot is really on the other leg," the bench said. 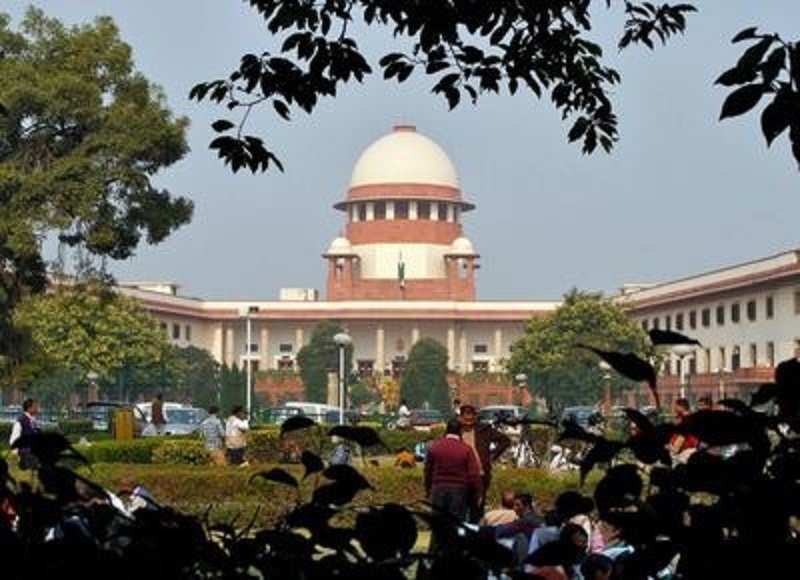 Pointing to the collateral damage the overcrowding of the judicial system caused other litigants, besides financial liabilities of the government, the court asked when the "Rip Van Winkleism" would end.
"We hope that someday, some sense, if not better sense, will prevail on the Union of India with regard to the formulation of a realistic and meaningful national litigation policy and what it calls ‘ease of doing business', which can, if faithfully implemented, benefit litigants across the country," the bench said. 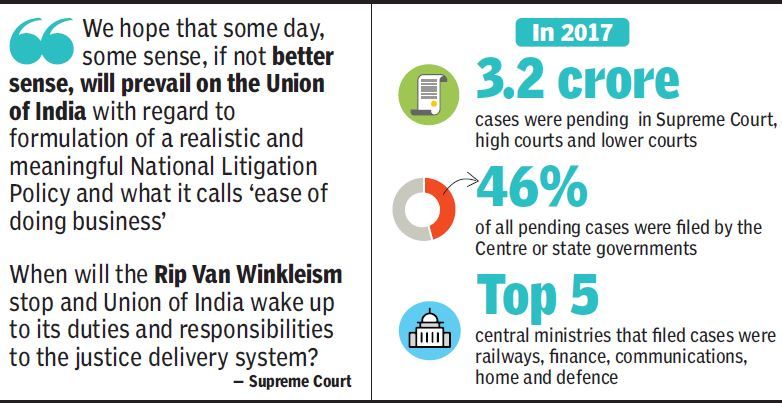 On December 8 last year, the SC had dismissed a batch of appeals filed by the Centre. Unmindful, the Centre filed another batch of petitions in March involving the very same question of law on the same issue dealt with in December. It was dismissed with a cost of Rs 1 lakh on March 9. The SC told the Centre that it should not "unnecessarily burden the justice delivery system" and must shape up its litigation policy.
"Unfortunately, the Union government has learned no lesson," the bench of Justices Lokur and Gupta said on April 24 when it came across a third set of appeals on the same issue with an identical question of law. The bench said it had expected the Centre to take steps to withdraw all pending appeals from the SC registry once the question of law was settled by the December 8 order.
"But obviously, the Union government has no such concern and did not withdraw appeals from the registry. The government must appreciate that by pursuing frivolous or infructuous cases, it is adding to the burden of this court and collaterally harming other litigants by delaying hearing in their cases through the sheer volume of numbers. If the Union government cares a little for the justice delivery system, it should display some concern for litigants, many of whom have to spend a small fortune in litigating in the Supreme Court," it said and slapped an additional cost of Rs 1 lakh while dismissing the appeals. 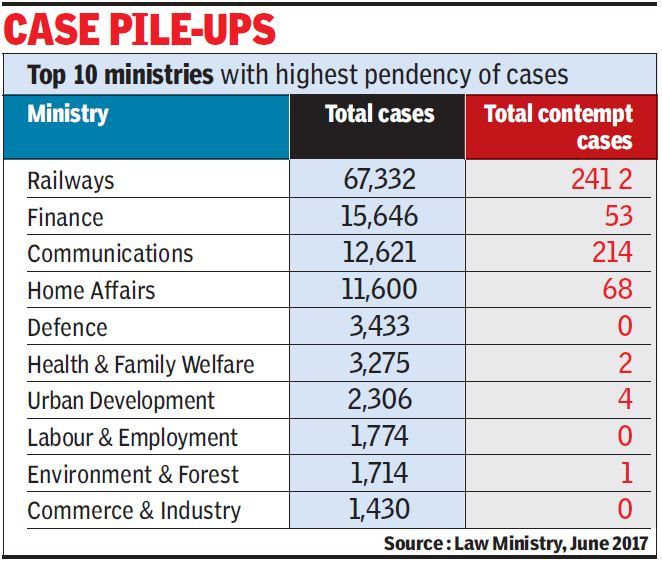 Writing the judgment for the bench, Justice Lokur said, "To make matters worse, in this appeal, the Union government has engaged 10 lawyers, including an additional solicitor general and a senior advocate. In other words, the Union government has created a huge financial liability by engaging so many lawyers for an appeal whose fate can be easily imagined on the basis of existing orders of dismissal in similar cases.