Forfeiture of Gratuityunder Payment of Gratuity Act not automatic on dismissal from service, SC

The Supreme Court has held that dismissal from service does not automatically result in forfeiture of gratuity under the Payment of Gratuity Act, 1972 (Act). The same is subject to Sections 4(5) and 4(6) of the Act.
The judgment was passed by a Bench of of Justice Kurian Joseph and Justice Sanjay Kishan Kaul in the case of Union Bank of India v. CG Ajay Babu.
By way of background, the Respondent in the case, Ajay Babu, was employed by the Petitioner-Bank as a Branch manager. During the course of his service, disciplinary proceedings were initiated against him on the ground that he failed to take all steps to ensure and protect the interests of the Bank, failed to discharge his duties with utmost devotion, and conducted himself in a manner “unbecoming of an officer.”
On the abovementioned charges, the respondent was dismissed from service in June 2004. A few months before the dismissal order attained finality, the respondent was served a show-cause notice and was asked to furnish his response on why the gratuity due to him should not be forfeited on account of Respondent’s “acts involving moral turpitude.”
The Respondent submitted his response to this show-cause notice in February 2004. However, his response was rejected and vide an order passed in April 2004, the petitioner Bank forfeited the gratuity due to the respondent citing provisions of the Act and the Bank’s Gratuity Rules.
This forfeiture of gratuity was challenged before the High Court wherein the Single Judge, without interfering in the dismissal from service, held that since the misconduct did not lead to financial loss to the Bank, the Respondent was entitled to gratuity.
It was also held that as per the bipartite settlement prevailing in the bank, forfeiture of gratuity is permissible only in case the misconduct leading to the dismissal has caused financial loss to the Bank and only to the extent of the loss.
An appeal against this judgement was dismissed by a Division Bench of the High Court leading to the appeal in Supreme Court.
The Court proceeded to analyse Section 4(5) and Section 4(6) of the Payment of Gratuity Act.
Section 4(5) says that “nothing will affect the right of a person to receive better terms of the gratuity.”
Section 4(6) lays down that gratuity of an employee who has been terminated on the grounds that he has wilfully caused damage to the employer, can to the extent of that loss or damage be forfeited.
Further, it also provides that gratuity payable to an employee may be wholly or partially forfeited – (i) if the services of such employee have been terminated for his riotous or disorderly conduct or any other act of violence on his part, or (ii) if the services of such employee have been terminated for any act which constitutes an offence involving moral turpitude, provided that such offence is  committed by him in the course of his employment.
The Court observed that sub-section (5) of Section 4 of the Act has an overriding effect on all other sub-sections of Section 4. Additionally, the Court noted that there exists a bipartite settlement in the appellant-Bank which has a clause relating to gratuity and reads as follows:
“12.2 There will be no forfeiture of gratuity for dismissal on account of misconduct except in cases where such misconduct causes financial loss to the bank and in that case to that extent only.”
The Counsel appearing for the Bank submitted that Section 4(5) dealt with only the “better terms of gratuity”, that is quantum of gratuity, and not with the entitlement of the gratuity under an award or contract. This argument, the Court said, was not appreciable.
Agreeing with the view taken by the High Court, the Supreme Court noted that the fact that the bipartite settlement clause exists is not disputed and neither is it contended that the respondent employee caused any financial loss to the Bank. Therefore, Section 4(6) of the Act which allows forfeiture of gratuity to the extent of loss caused, cannot be resorted to.
The Court then proceeded to deal with the contention of the appellant-Bank that the conduct of the respondent which led to the framing of charges in the departmental proceedings involved moral turpitude.
It is not the conduct of a person involving moral turpitude that is required for forfeiture of gratuity but the conduct or the act should constitute an offence involving moral turpitude, the Court held.
“To be an offence, the act should be made punishable under law. That is absolutely in the realm of criminal law. It is not for the Bank to decide whether an offence has been committed. It is for the court.”
The Court noted that apart from the disciplinary proceedings initiated by the appellant Bank, the Bank has not set the criminal law in motion either by registering an FIR or by filing a criminal complaint so as to establish that the misconduct leading to dismissal is an offence involving moral turpitude.
Under sub-Section (6)(b)(ii) of the Act, forfeiture of gratuity is permissible only if the termination of an employee is for any misconduct which constitutes an offence involving moral turpitude, and convicted accordingly by a court of competent jurisdiction.
Hence, the Court turned down the contention of the appellant in this regard.
“Hence, there is no justification for the forfeiture of gratuity on the ground stated in the order dated 20.04.2004 that the “misconduct proved against you amounts to acts involving moral turpitude”. At the risk of redundancy, we may state that the requirement of the statute is not the proof of misconduct of acts involving moral turpitude but the acts should constitute an offence involving moral turpitude and such offence should be duly established in a court of law.”
It, therefore, summed up that forfeiture of gratuity is not automatic on dismissal from service but is subject to sub-Sections (5) and (6) of Section 4 of the Payment of Gratuity Act, 1972.
It thus dismissed the appeal. 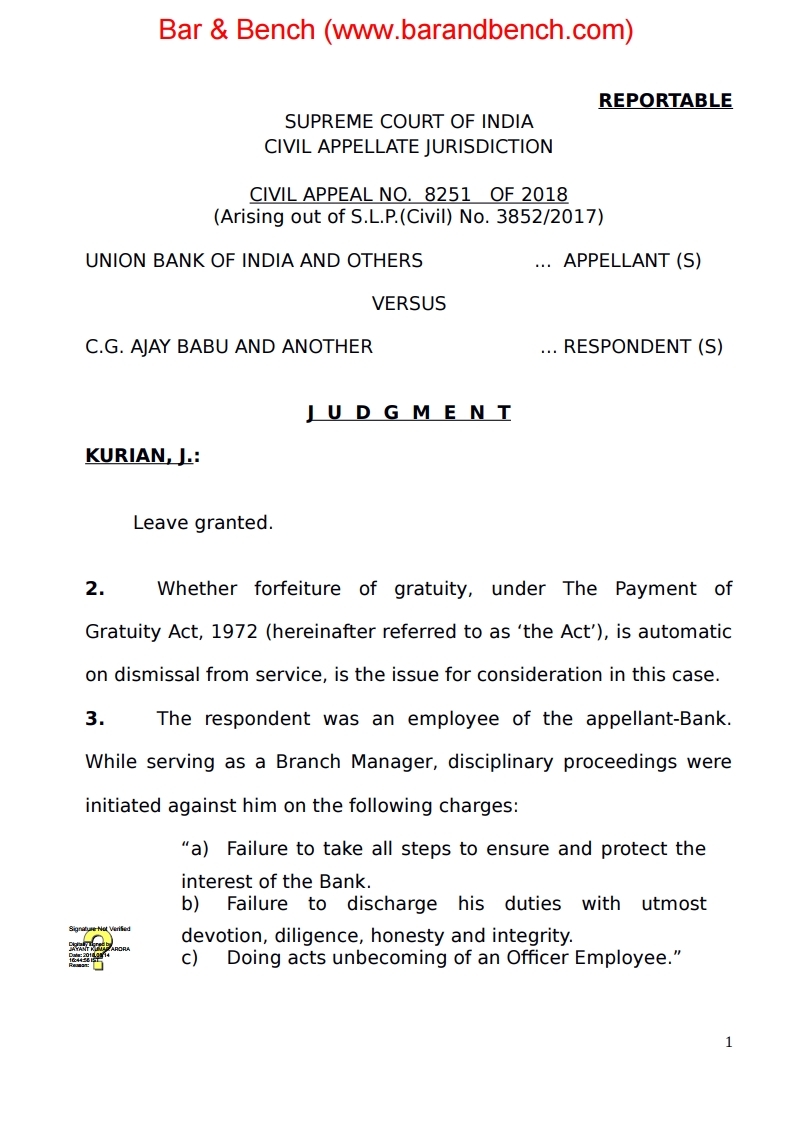 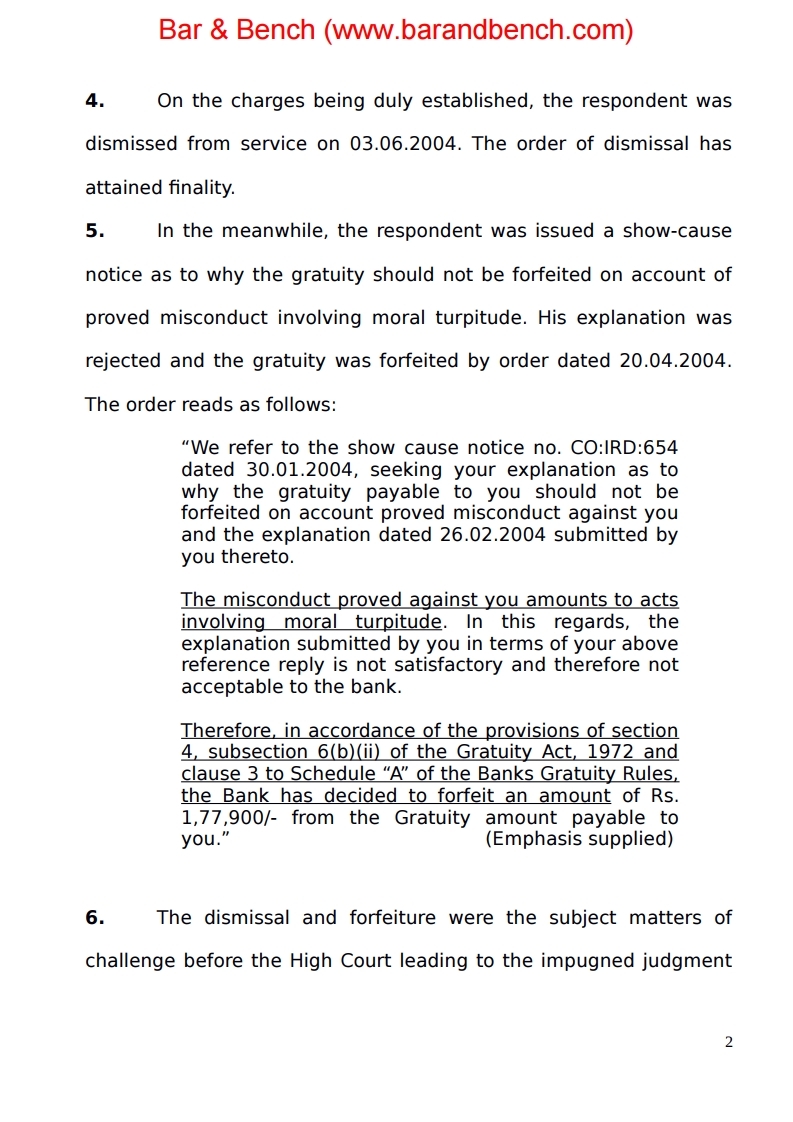 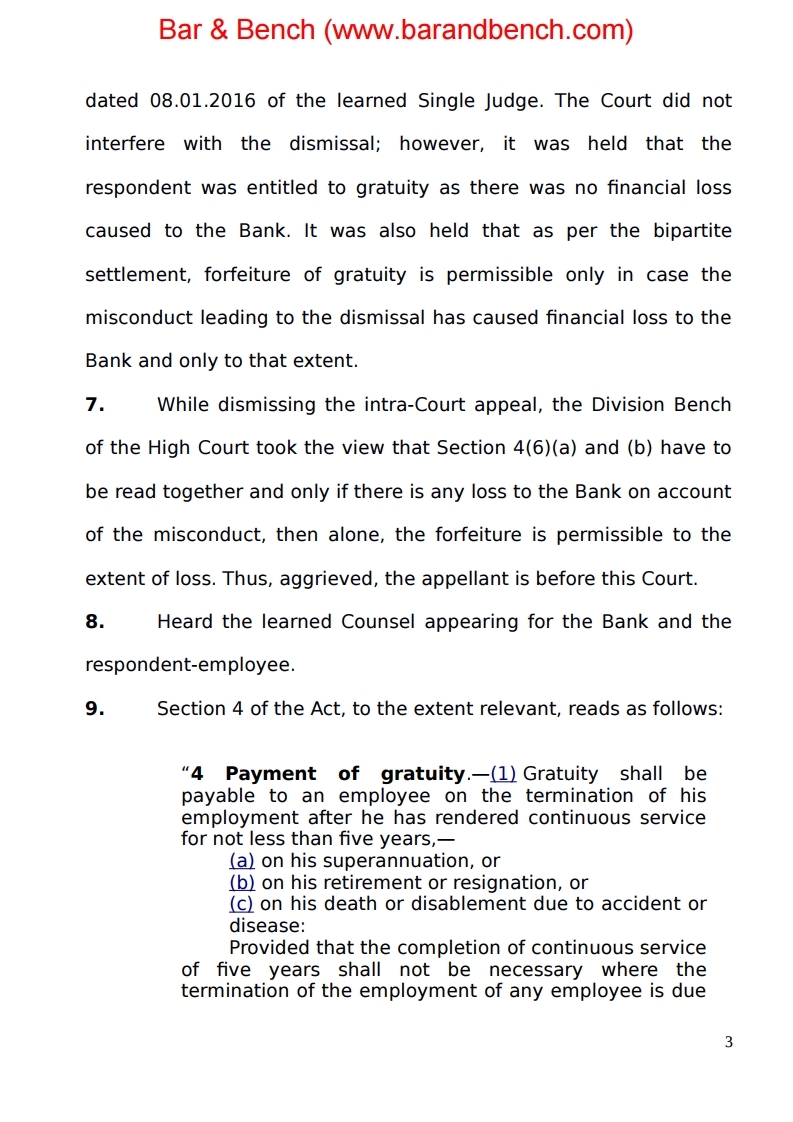 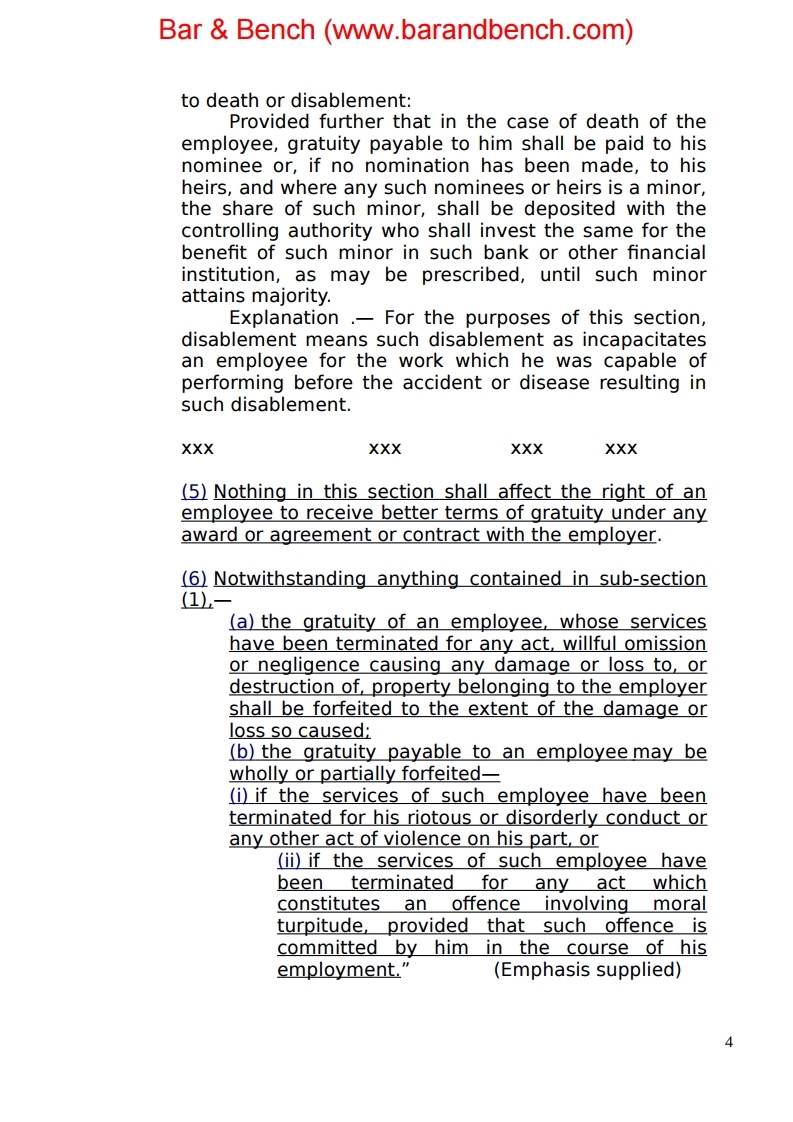 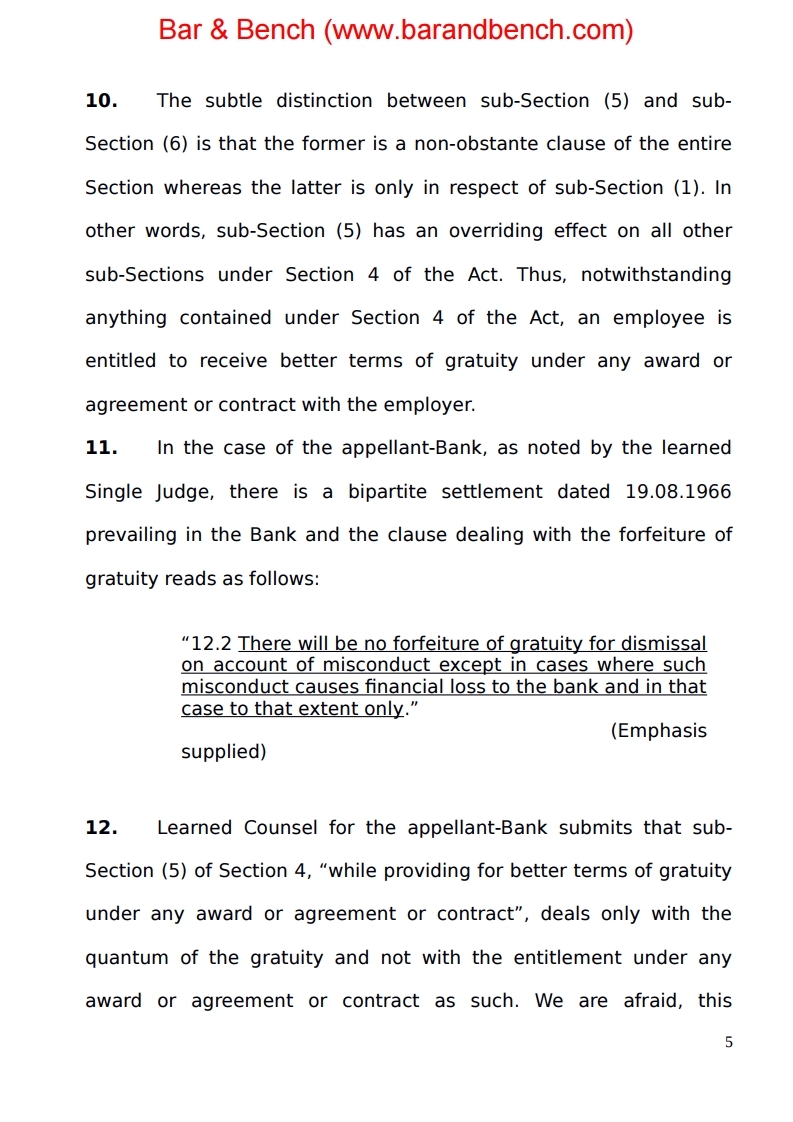 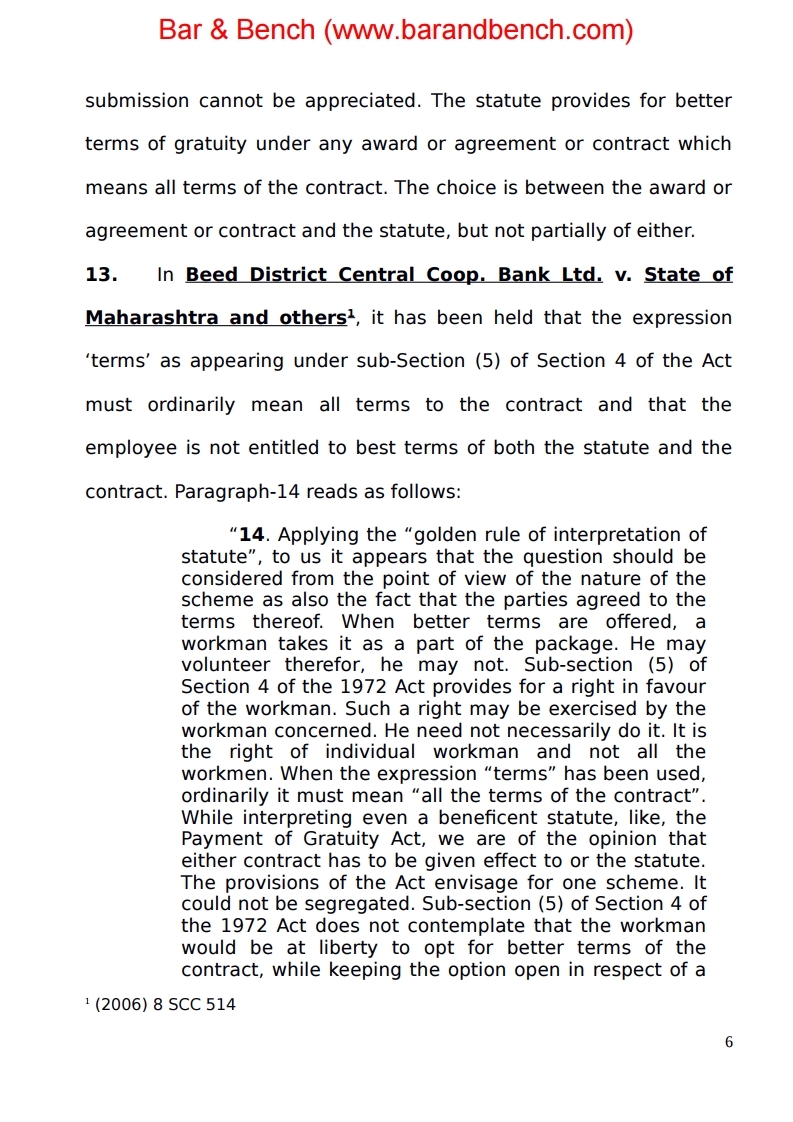 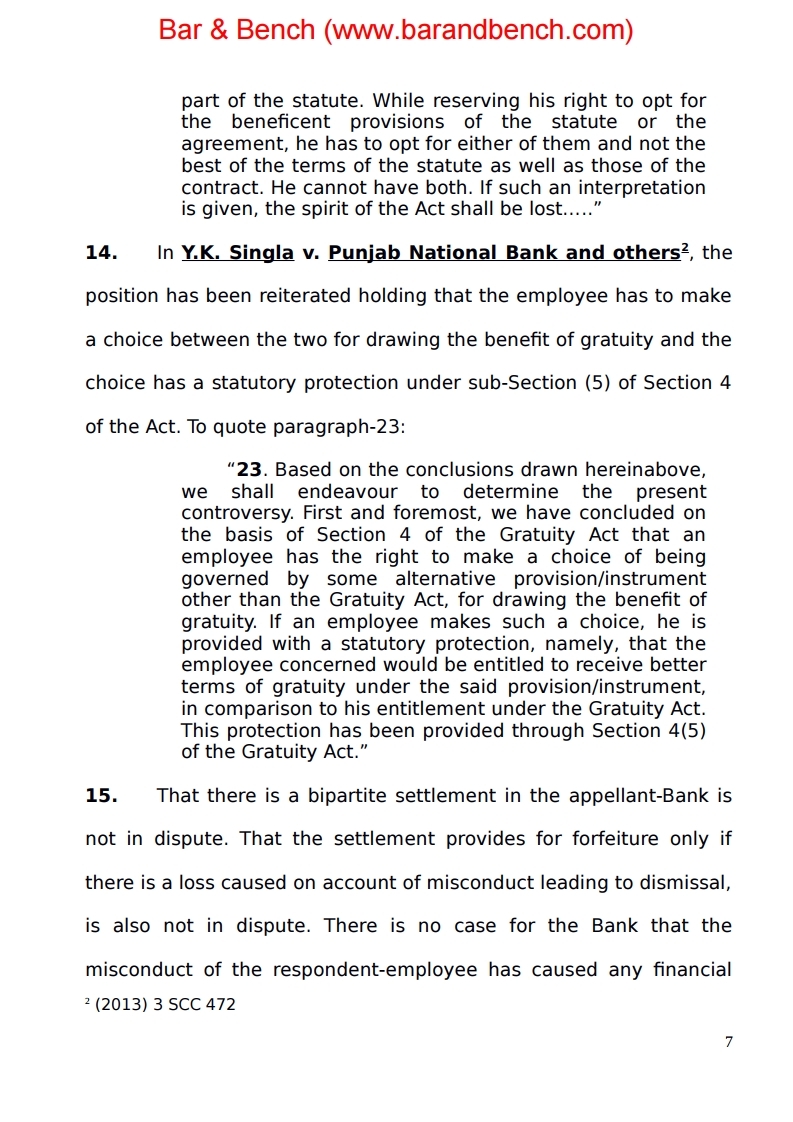 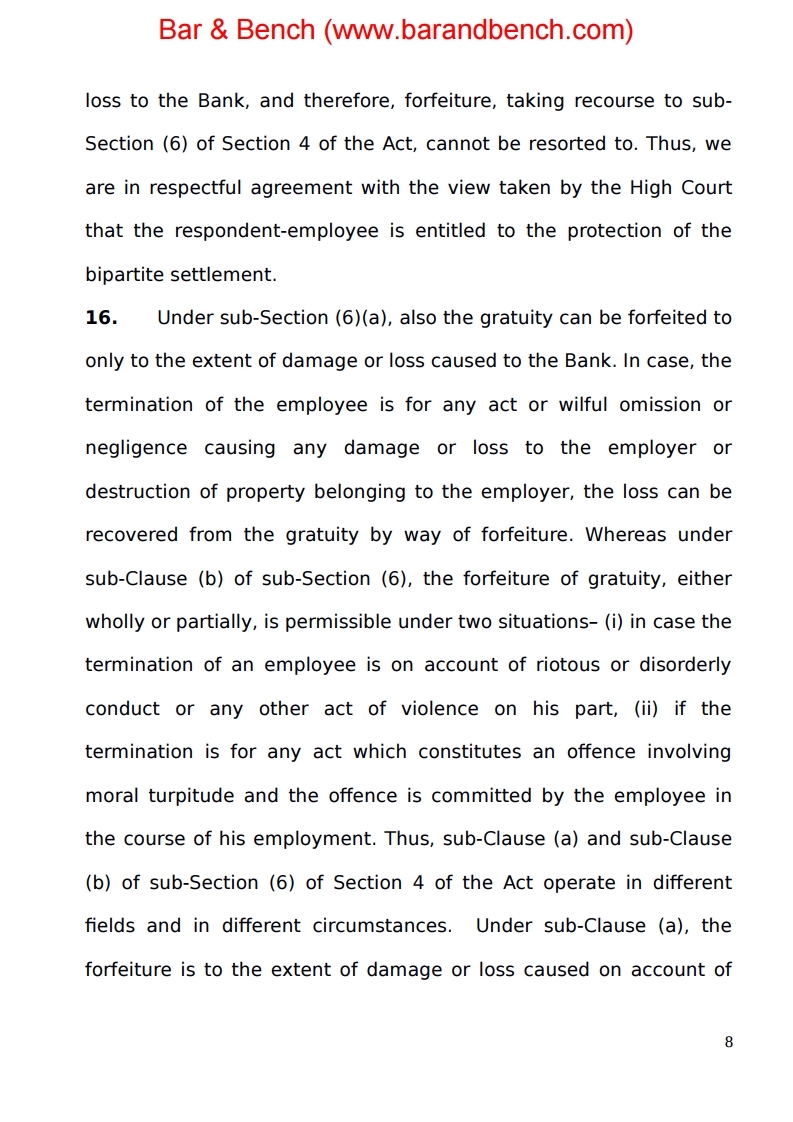 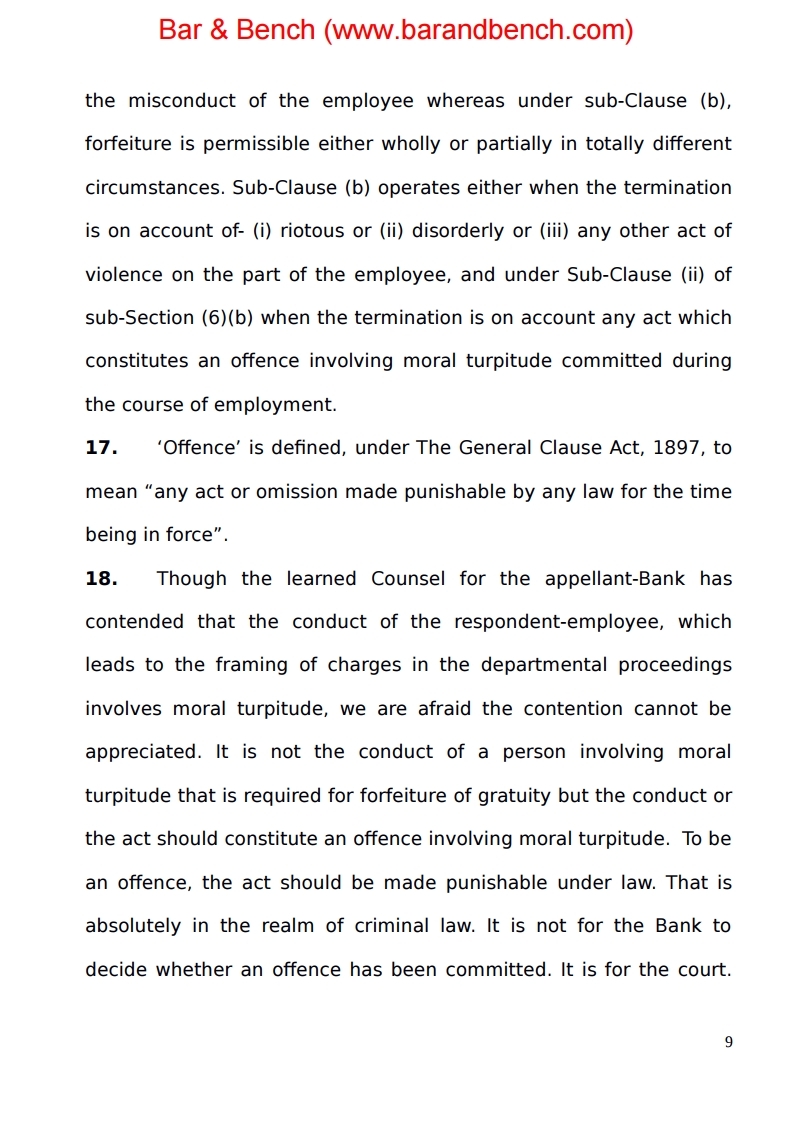 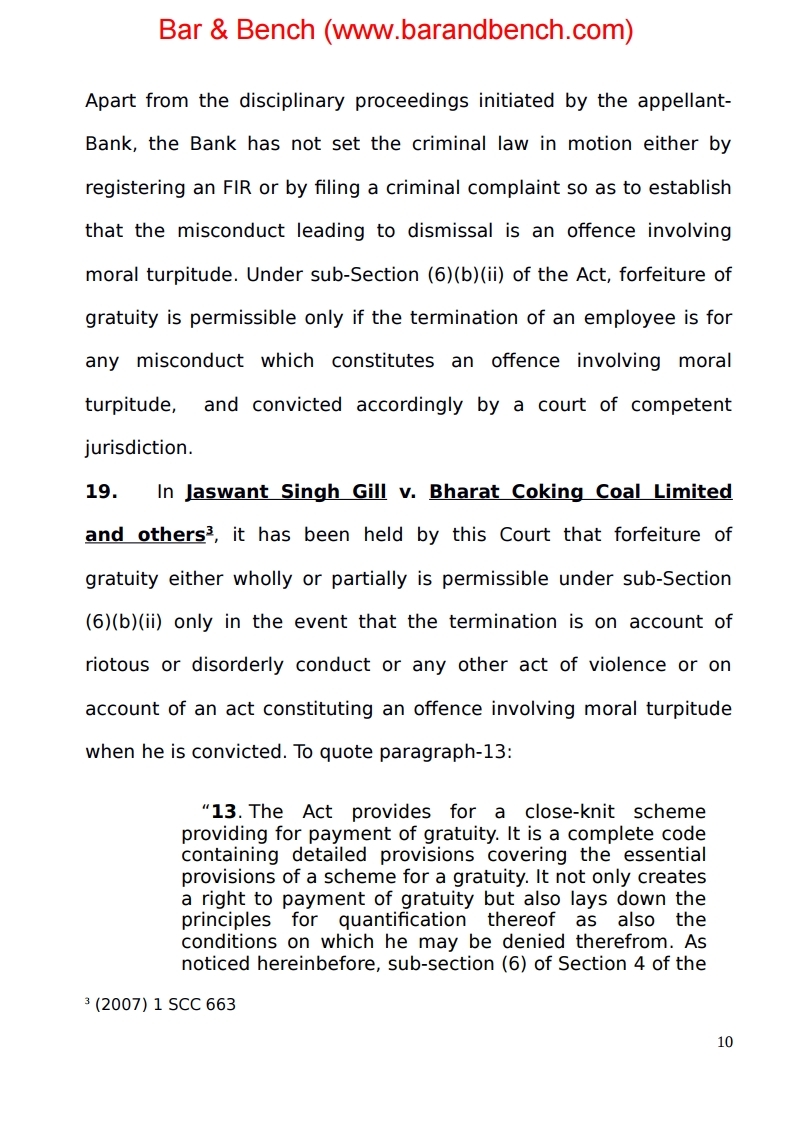 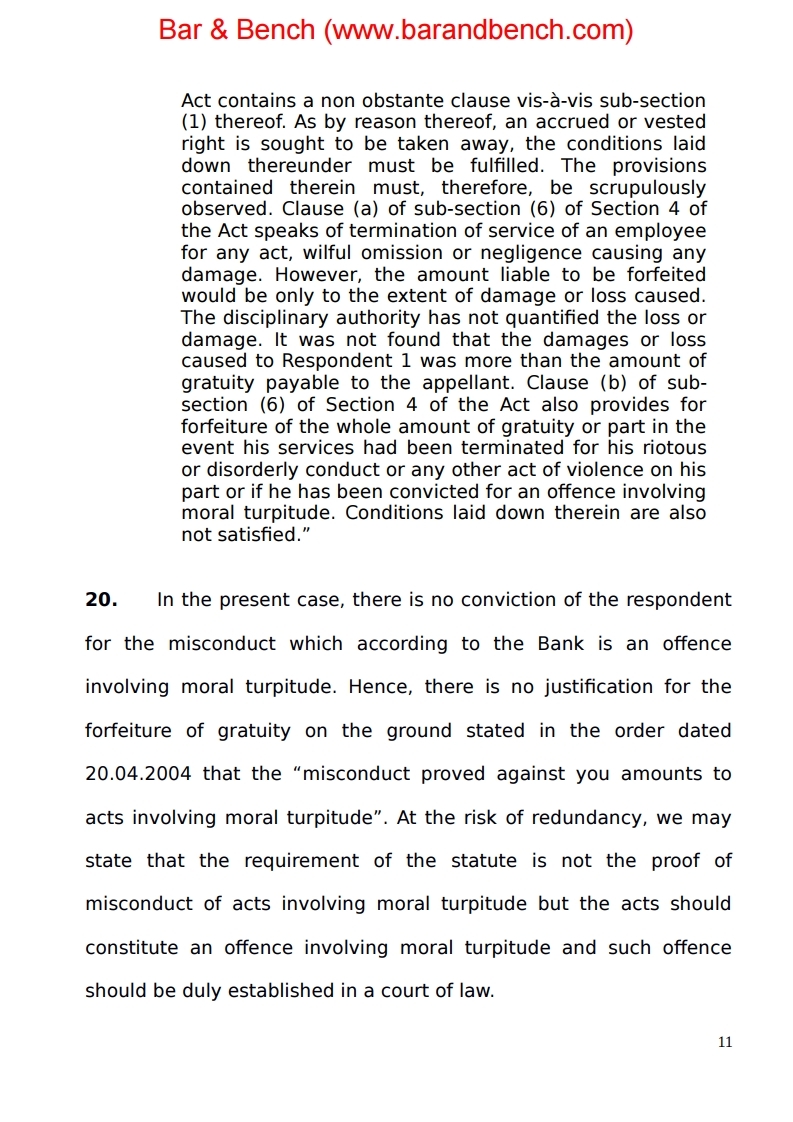 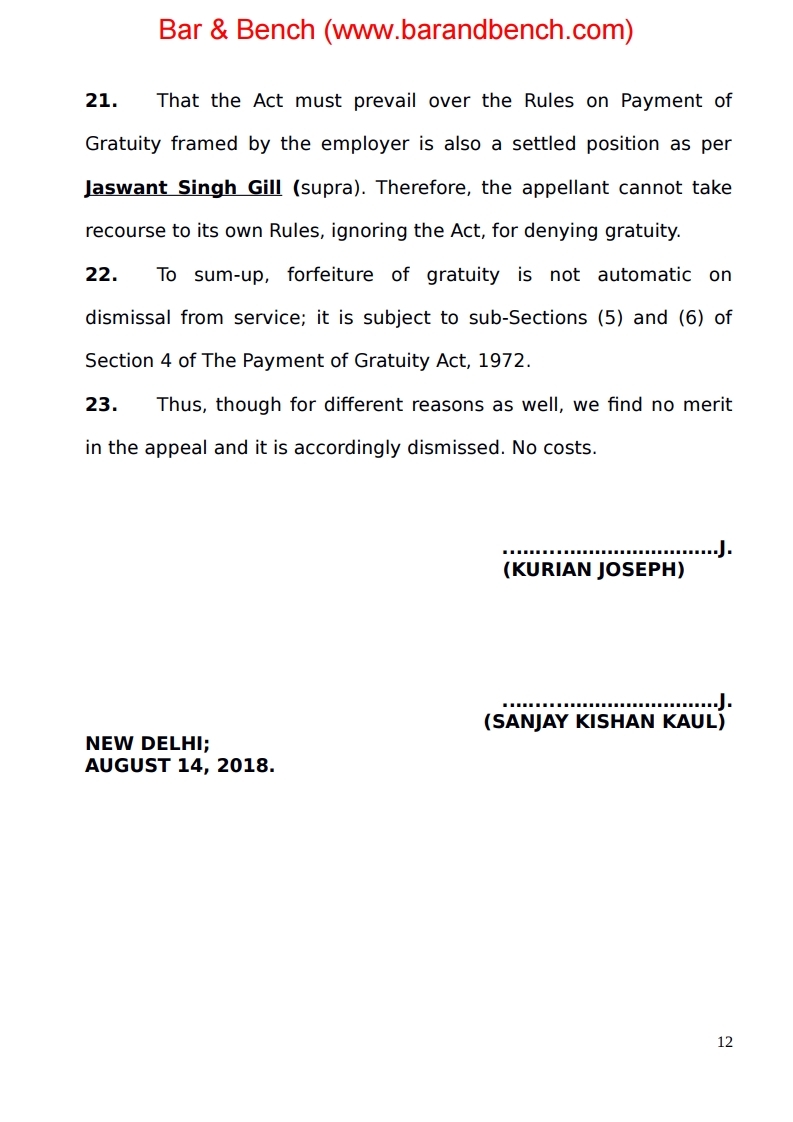