One Rank One Pension: Daily Order of the Supreme Court dated 01 May 2019 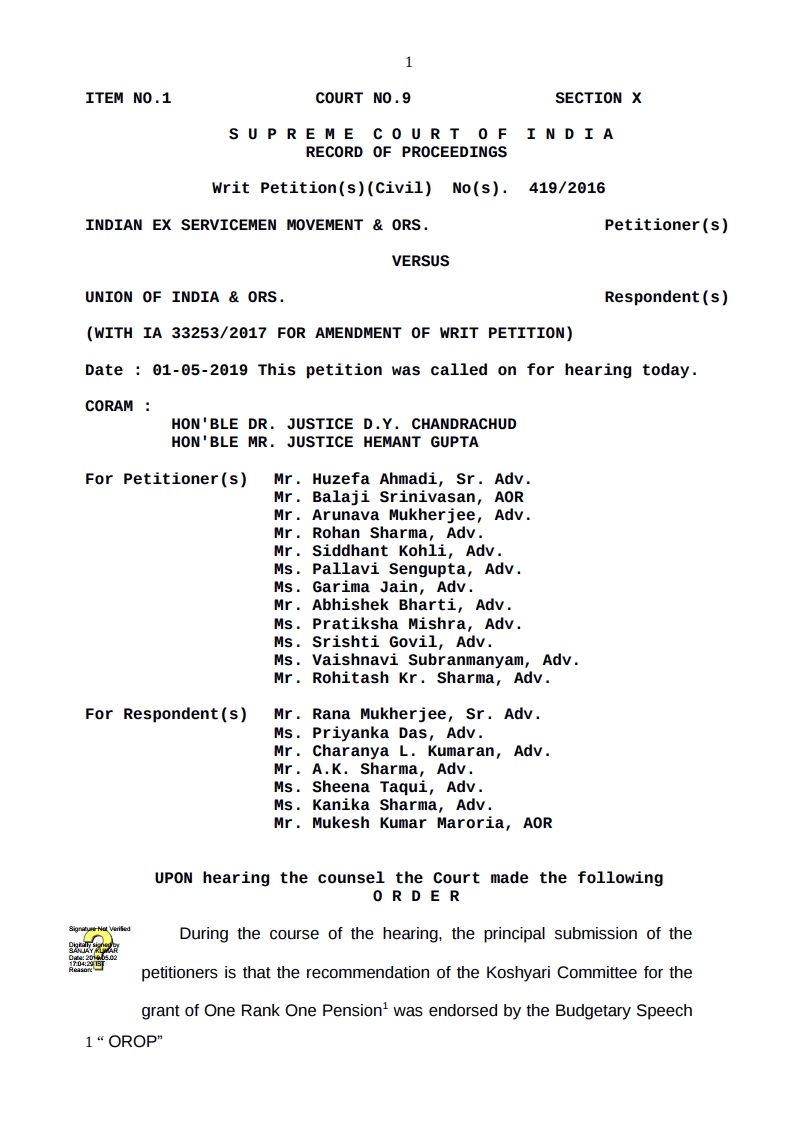 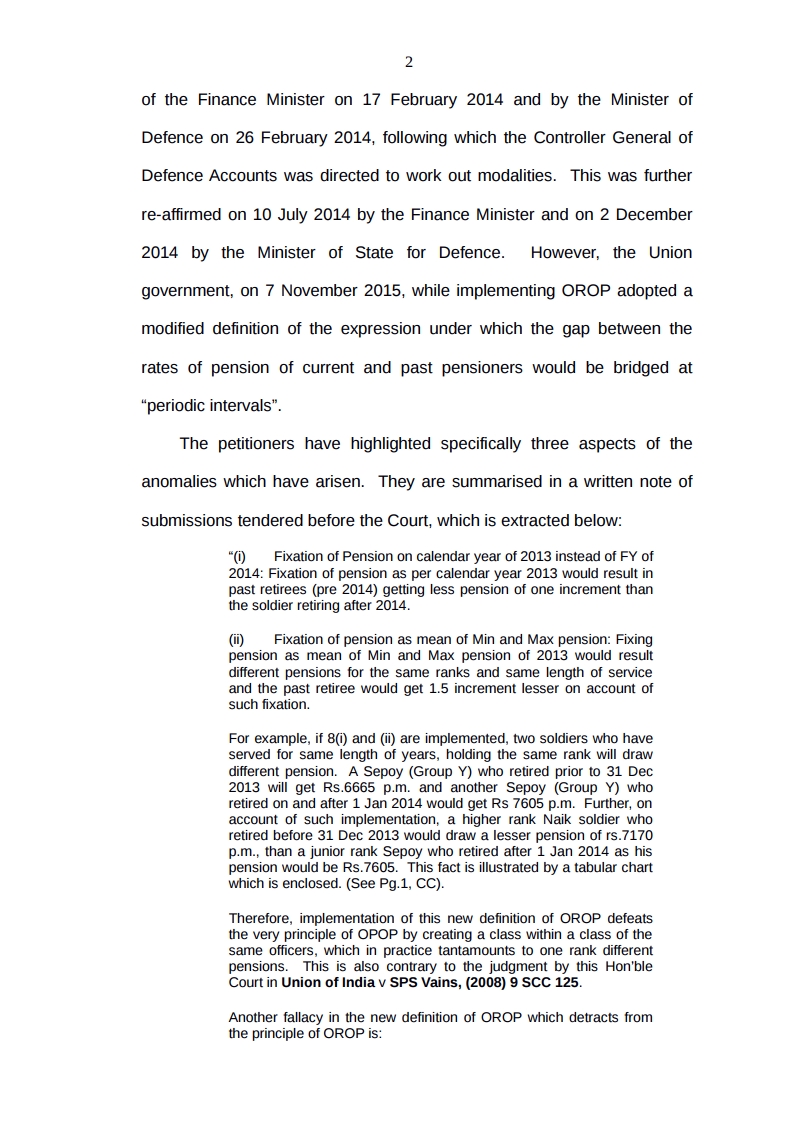 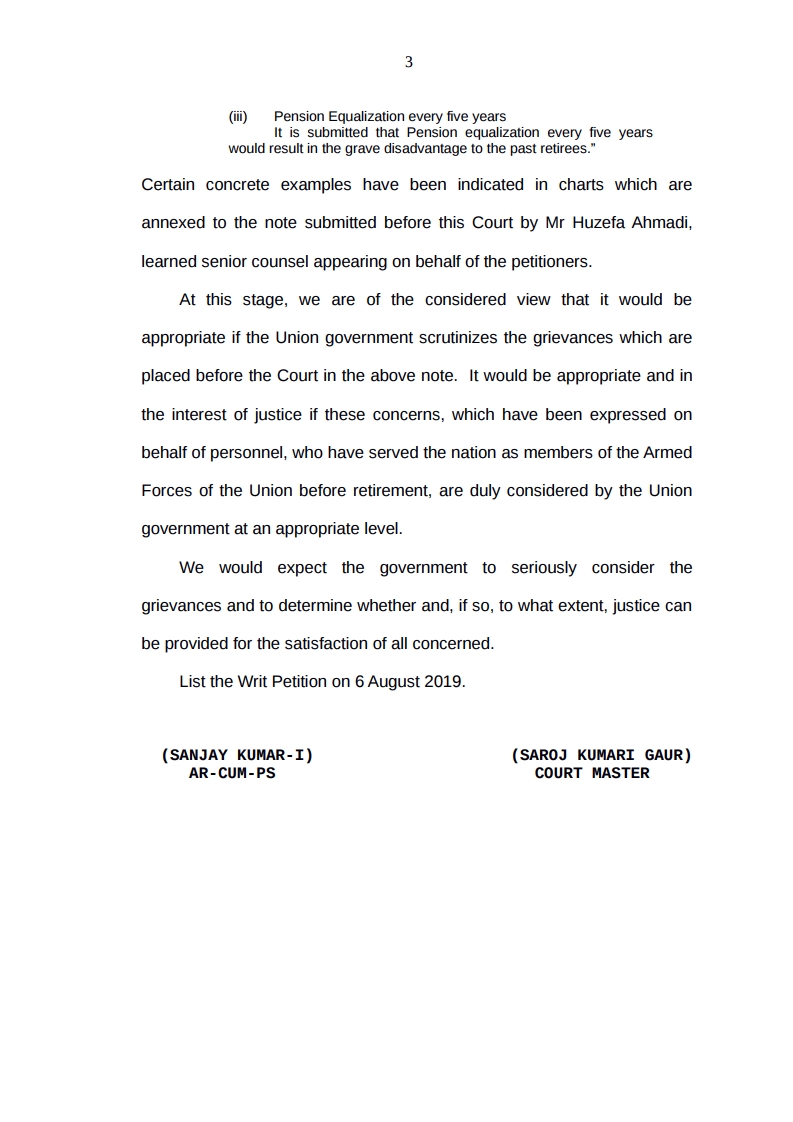 One Rank One Pension: Daily Order of the Supreme Court dated 01 May 2019

During the course of the hearing, the principal submission of the petitioners is that the recommendation of the Koshyari Committee for thegrant of One Rank One Pension (OROP) was endorsed by the Budgetary Speech of the Finance Minister on 17 February 2014 and by the Minister of Defence on 26 February 2014, following which the Controller General of Defence Accounts was directed to work out modalities. This was further re-affirmed on 10 July 2014 by the Finance Minister and on 2 December 2014 by the Minister of State for Defence. However, the Union government, on 7 November 2015, while implementing OROP adopted a modified definition of the expression under which the gap between the rates of pension of current and past pensioners would be bridged at“periodic intervals”.
The petitioners have highlighted specifically three aspects of the anomalies which have arisen. They are summarised in a written note of submissions tendered before the Court, which is extracted below:

“(i) Fixation of Pension on calendar year of 2013 instead of FY of 2014: Fixation of pension as per calendar year 2013 would result in past retirees (pre 2014) getting less pension of one increment than the soldier retiring after 2014.

(ii) Fixation of pension as mean of Min and Max pension: Fixing pension as mean of Min and Max pension of 2013 would result different pensions for the same ranks and same length of service and the past retiree would get 1.5 increment lesser on account of such fixation.For example, if 8(i) and (ii) are implemented, two soldiers who have served for same length of years, holding the same rank will draw different pension. A Sepoy (Group Y) who retired prior to 31 Dec2013 will get Rs.6665 p.m. and another Sepoy (Group Y) who retired on and after 1 Jan 2014 would get Rs 7605 p.m. Further, on account of such implementation, a higher rank Naik soldier who retired before 31 Dec 2013 would draw a lesser pension of rs.7170p.m., than a junior rank Sepoy who retired after 1 Jan 2014 as his pension would be Rs.7605. This fact is illustrated by a tabular chart which is enclosed. (See Pg.1, CC).

Therefore, implementation of this new definition of OROP defeats the very principle of OROP by creating a class within a class of the same officers, which in practice tantamounts to one rank different pensions. This is also contrary to the judgment by this Hon’ble Court in Union of India v SPS Vains, (2008) 9 SCC 125.

Another fallacy in the new definition of OROP which detracts from the principle of OROP is:

It is submitted that Pension equalization every five years would result in the grave disadvantage to the past retirees.”


Certain concrete examples have been indicated in charts which are annexed to the note submitted before this Court by Mr Huzefa Ahmadi, learned senior counsel appearing on behalf of the petitioners.
At this stage, we are of the considered view that it would be appropriate if the Union government scrutinizes the grievances which are placed before the Court in the above note. It would be appropriate and in the interest of justice if these concerns, which have been expressed on behalf of personnel, who have served the nation as members of the Armed Forces of the Union before retirement, are duly considered by the Union government at an appropriate level.
We would expect the government to seriously consider the grievances and to determine whether and, if so, to what extent, justice canbe provided for the satisfaction of all concerned.
List the Writ Petition on 6 August 2019.
(SANJAY KUMAR-I)
AR-CUM-PS(SAROJ KUMARI GAUR)
COURT MASTER
Source: Supreme Court Website
[https://www.sci.gov.in/supremecourt/2016/19818/19818_2016_Order_01-May-2019.pdf]