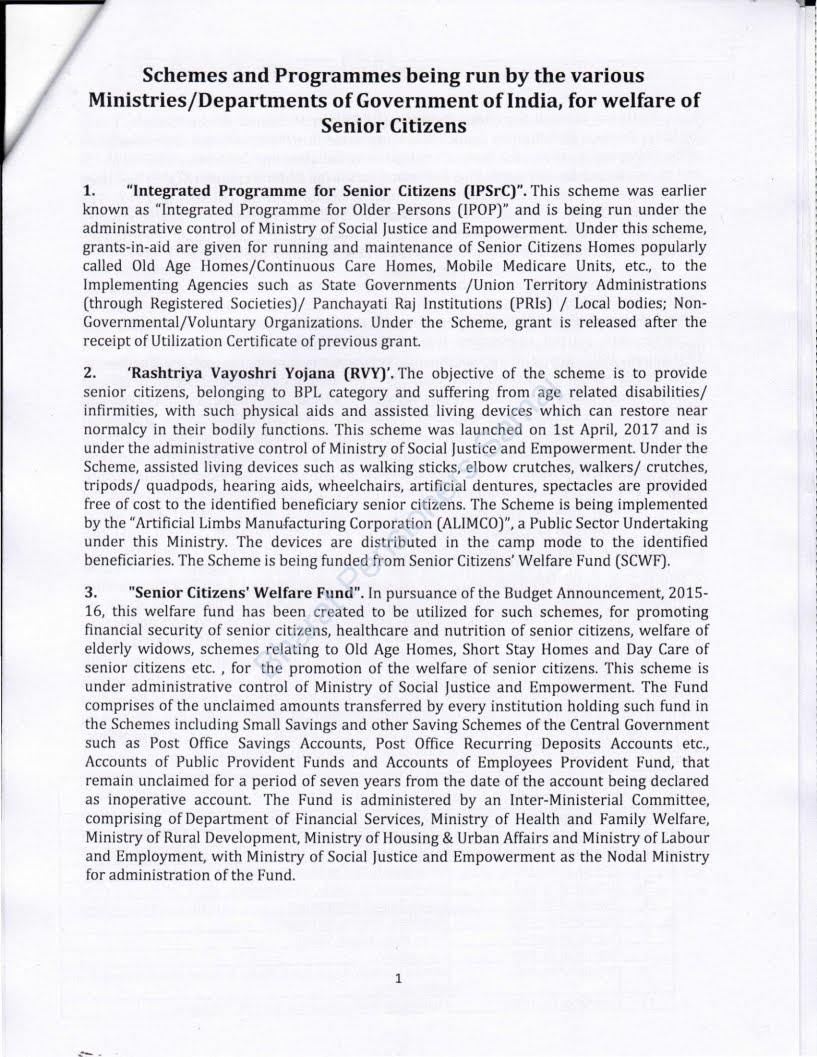 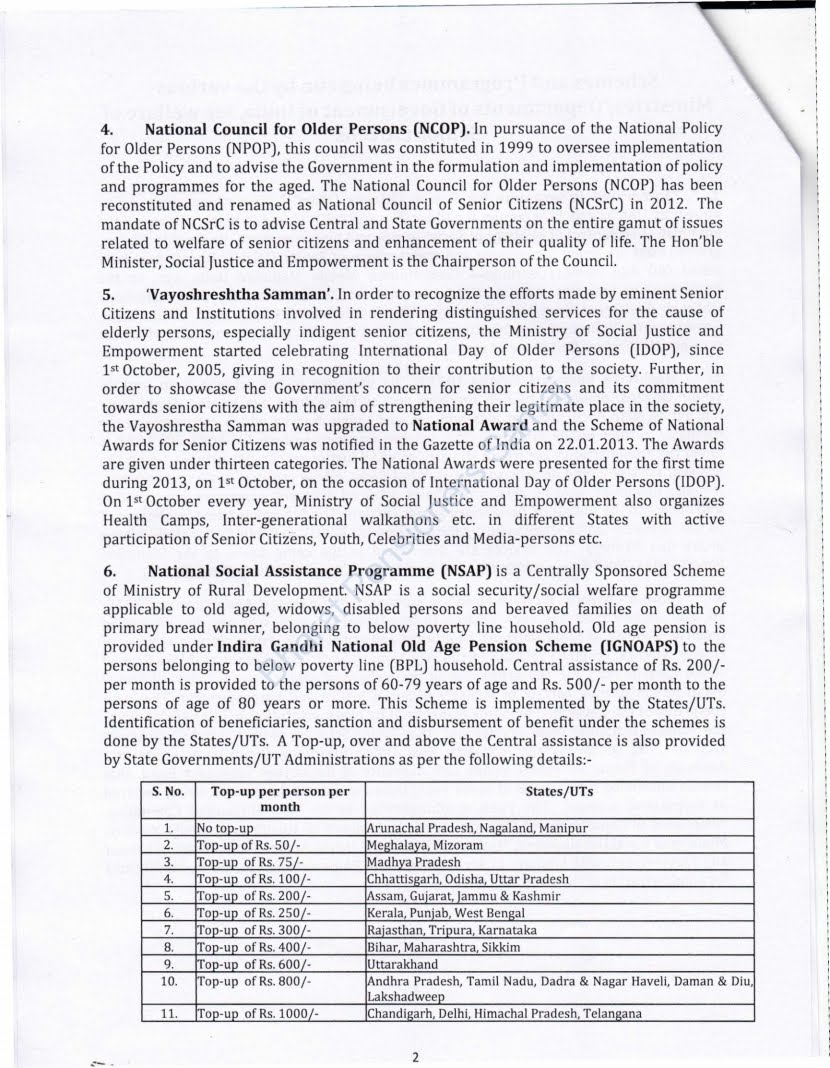 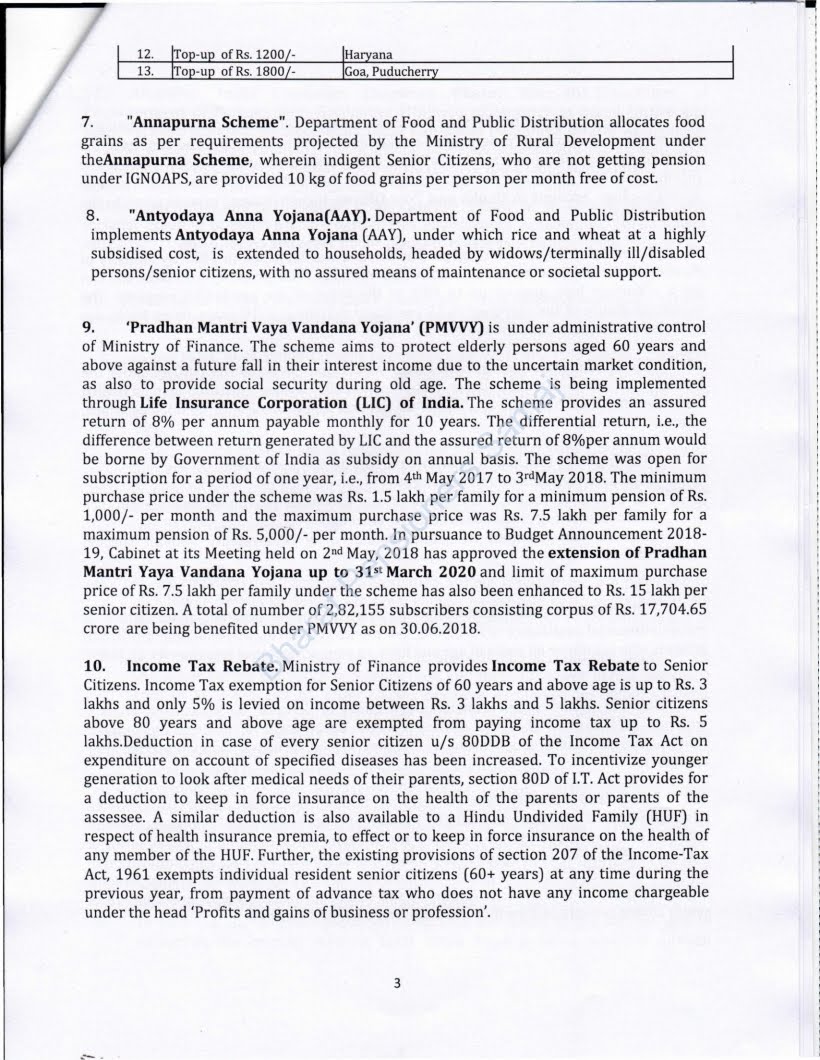 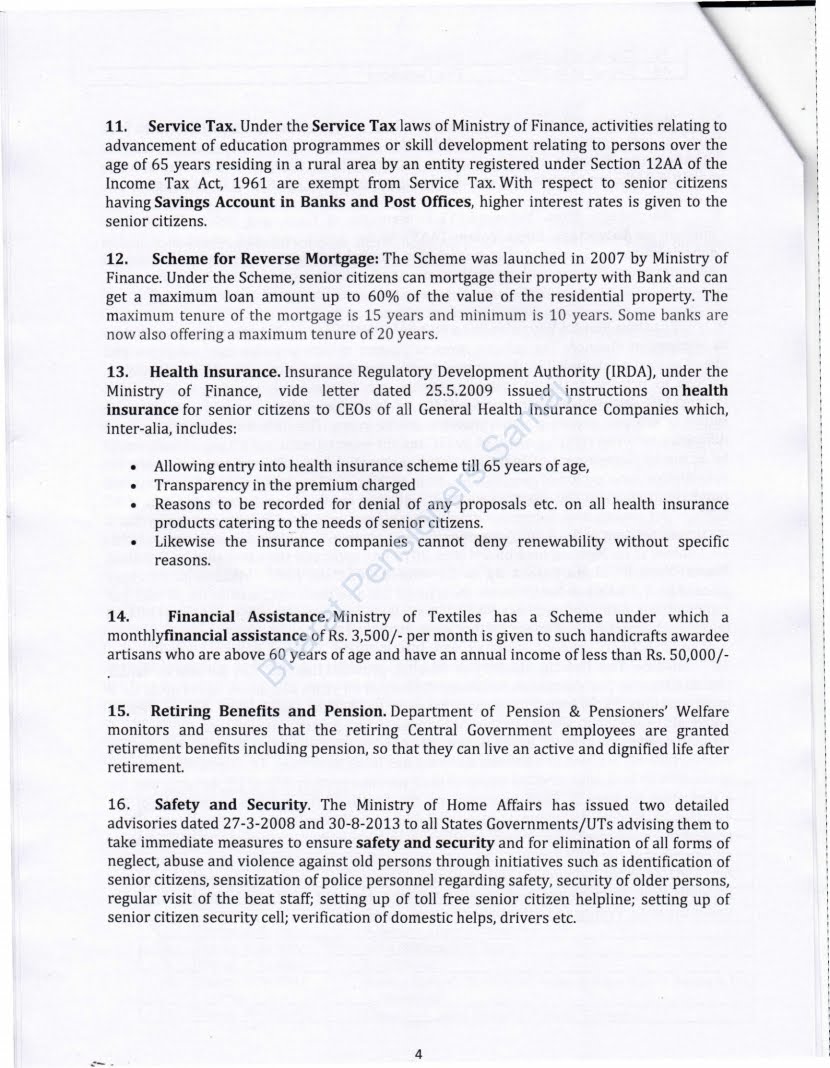 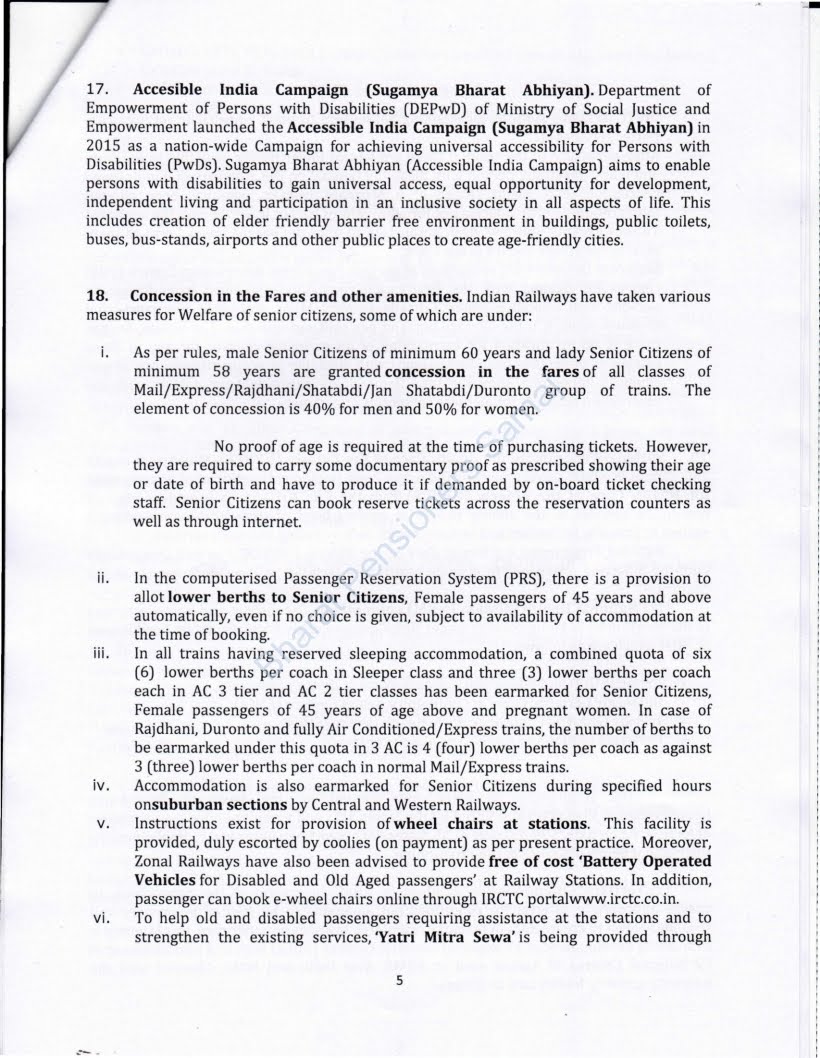 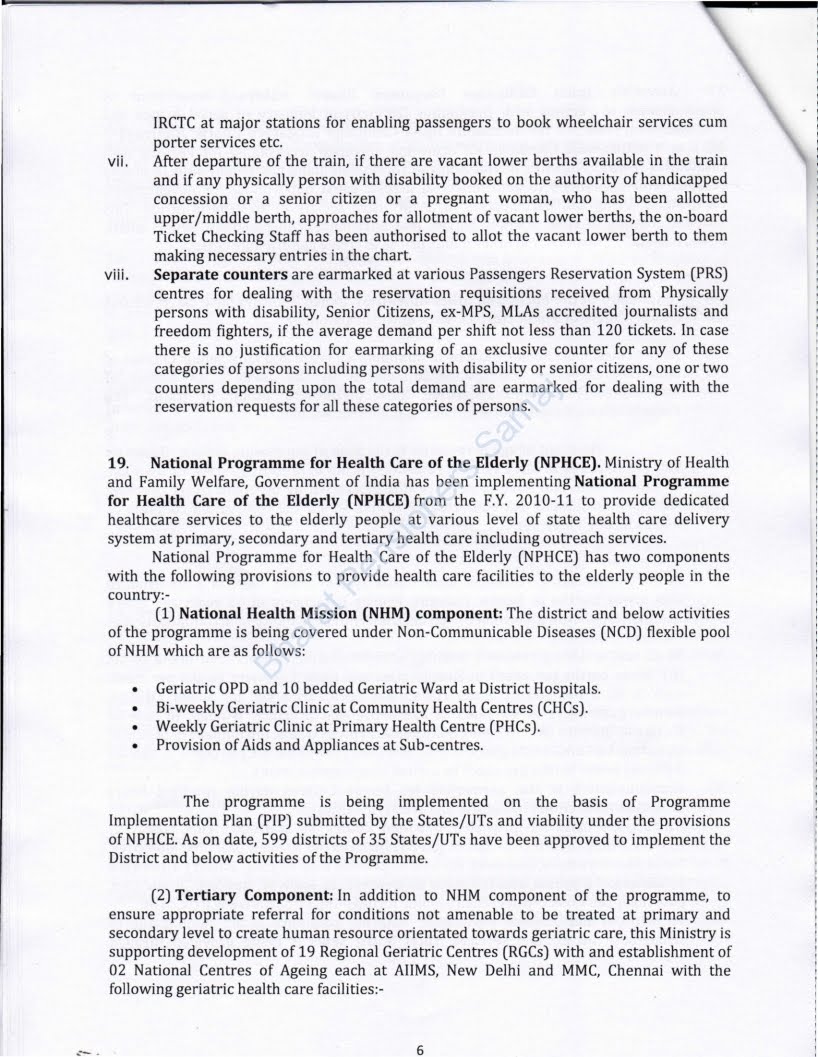 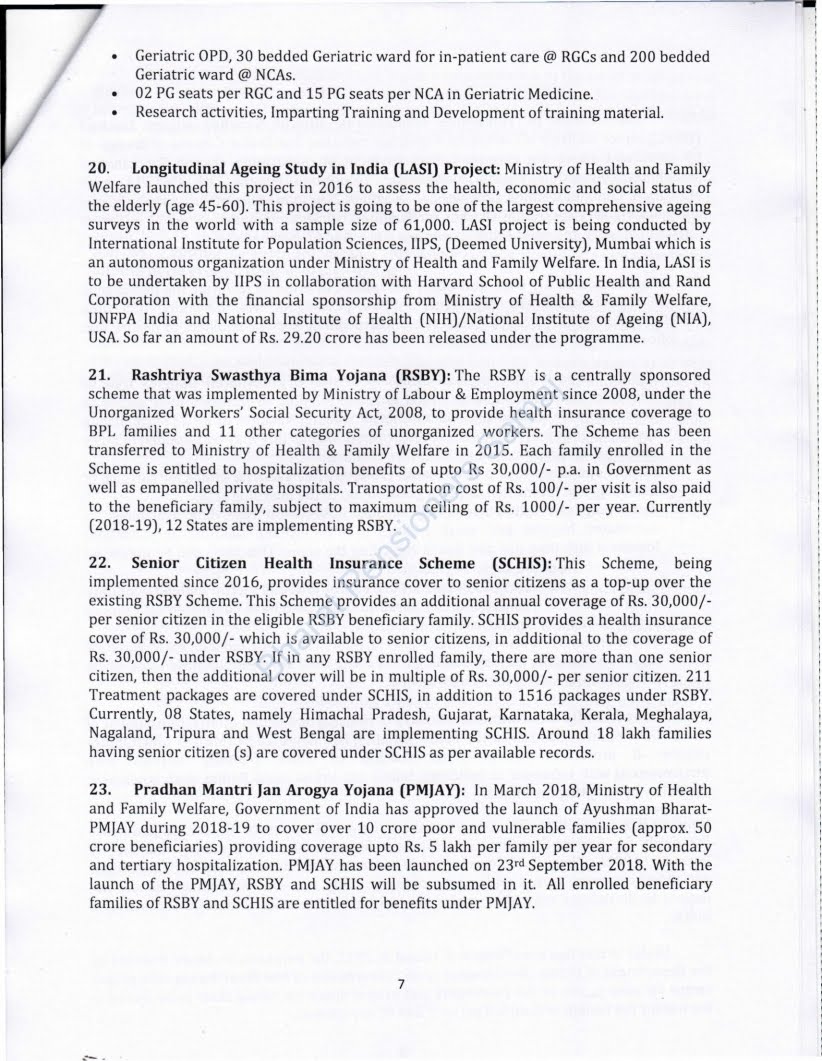 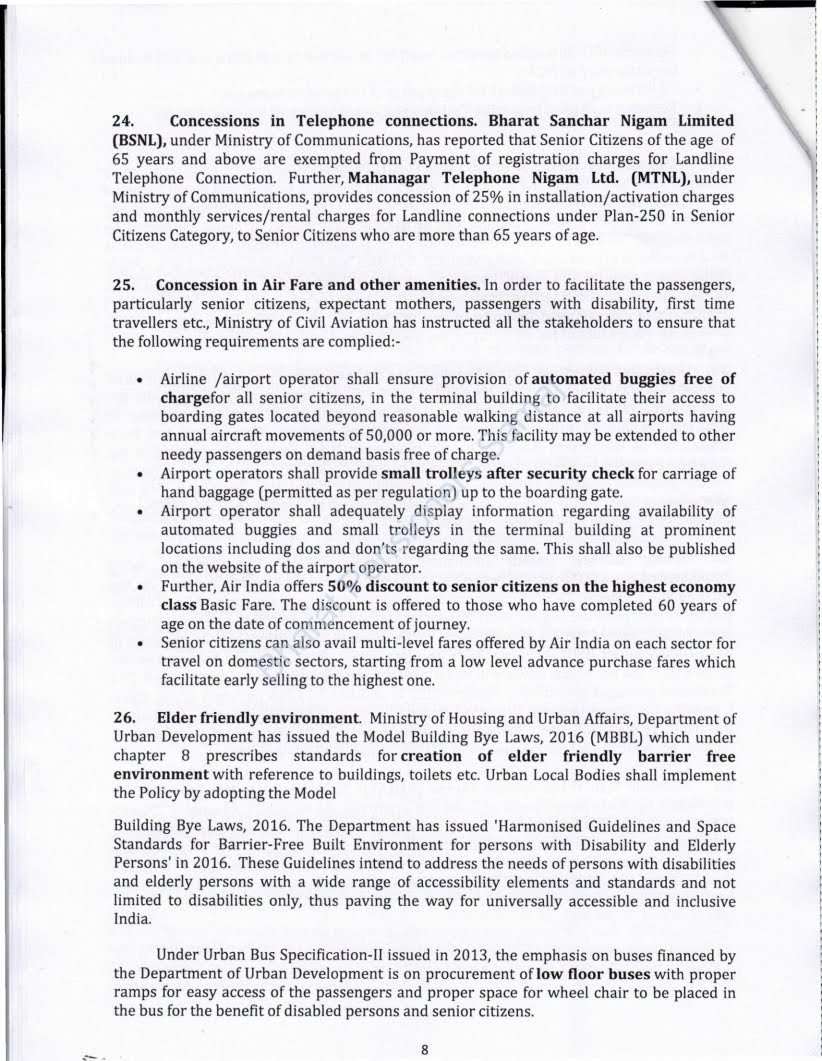 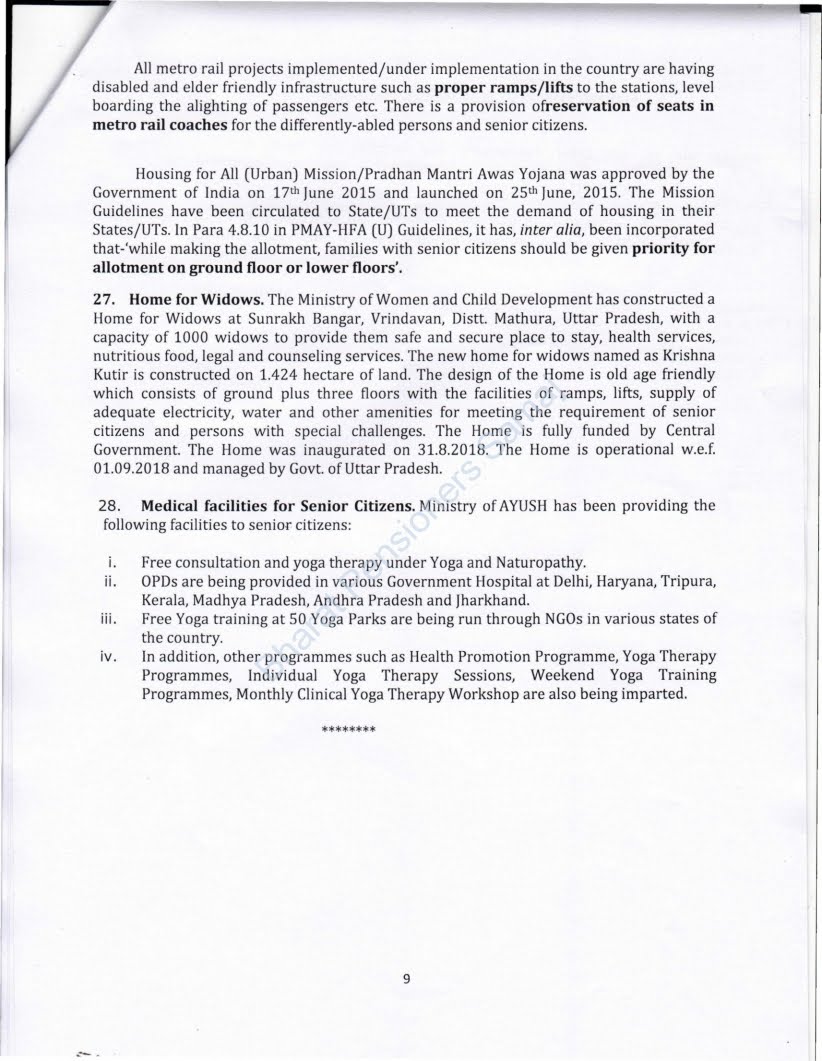 Hon’ble Prime Minister announced Pradhan Mantri Jan Dhan Yojana as the National Mission on Financial Inclusion in his Independence Day address on 15th August 2014, to ensure comprehensive financial inclusion of all the households in the country by providing universal access to banking facilities with at least one basic bank account to every household, financial literacy, access to credit, insurance and pension facility. Under this, a person not having a savings account can open an account without the requirement of any minimum balance and, in case they self-certify that they do not have any of the officially valid documents required for opening a savings account, they may open a small account. Further, to expand the reach of banking services, all of over 6 lakh villages in the country were mapped into 1.59 lakh Sub Service Areas (SSAs), with each SSA typically comprising of 1,000 to 1,500 households, and in the 1.26 lakh SSAs that did not have a bank branch, Bank Mitras were deployed for branchless banking.
Thus, PMJDY offers unbanked persons easy access to banking services and awareness about financial products through financial literacy programmes. In addition, they receive a RuPay debit card, with inbuilt accident insurance cover of Rs. 2 lakh, and access to overdraft facility upon satisfactory operation of account or credit history of six months. Further, through Prime Minister’s Social Security Schemes, launched by the Hon’ble Prime Minister on 9th May 2015, all eligible account holders can access through their bank accounts personal accident insurance cover under Pradhan Mantri Suraksha Bima Yojana, life insurance cover under Pradhan Mantri Jeevan Jyoti Bima Yojana, and guaranteed minimum pension to subscribers under Atal Pension Yojana.
PMJDY was conceived as a bold, innovative and ambitious mission. Census 2011 estimated that out of 24.67 crore households in the country, 14.48 crore (58.7%) had access to banking services. In the first phase of the scheme, these households were targeted for inclusion through opening of a bank account within a year of launch of the scheme. The actual achievement, by 26th January 2015, was 12.55 crore. As on 27.3.2019, the number of accounts has grown to 35.27 crore. Further, in 2011, only 0.33 lakh SSAs had banking facility and through provision of Bank Mitras in 1.26 lakh branchless SSAs, banking services were extended throughout rural India. The inclusive aspect of this is evident from the fact that 20.90 crore (60%) of PMJDY accounts are in rural areas and 18.74 crore (over 53%) PMJDY account holders are women.
The deposit base of PMJDY accounts has expanded over time. As on 27.3.2019, the deposit balance in PMJDY accounts was Rs. 96,107 crore. The average deposit per account has more than doubled from Rs. 1,064 in March 2015 to Rs. 2,725 in March 2019.
The Bank Mitra network has also gained in strength and usage. The average number of transactions per Bank Mitra, on the Aadhaar Enabled Payment System operated by Bank Mitras, has risen by over eightyfold, from 52 transactions in 2014-15 to 4,291 transactions in 2016-17.

From Jan Dhan to Jan Suraksha

For creating a universal social security system for all Indians, especially the poor and the under-privileged the Hon’ble Prime Minister launched three Social Security Schemes in the Insurance and Pension sectors on 9th of May, 2015.

The PMJJBY is available to people in the age group of 18 to 50 years having a bank account who give their consent to join / enable auto-debit. Aadhar is the primary KYC for the bank account. The life cover of Rs. 2 lakh is for the one year period stretching from 1st June to 31st May and is renewable. Risk coverage under this scheme is for Rs. 2 lakh in case of death of the insured, due to any reason. The premium is Rs. 330 per annum which is to be auto-debited in one installment from the subscriber’s bank account as per the option given by him on or before 31st May of each annual coverage period under the scheme. The scheme is being offered by the Life Insurance Corporation and all other life insurers who are willing to offer the product on similar terms with necessary approvals and tie up with banks for this purpose. As on 31st March, 2019, cumulative gross enrollment reported by banks subject to verification of eligibility, etc. is over 5.91 crore under PMJJBY. A total of 145763 claims were registered under PMJJBY of which 135212 have been disbursed.

The Scheme is available to people in the age group 18 to 70 years with a bank account who give their consent to join / enable auto-debit on or before 31st May for the coverage period 1st June to 31st May on an annual renewal basis. Aadhar would be the primary KYC for the bank account. The risk coverage under the scheme is Rs. 2 lakh for accidental death and full disability and Rs. 1 lakh for partial disability. The premium of Rs.12 per annum is to be deducted from the account holder’s bank account through ‘auto-debit’ facility in one instalment. The scheme is being offered by Public Sector General Insurance Companies or any other General Insurance Company who are willing to offer the product on similar terms with necessary approvals and tie up with banks for this purpose. As on 31st March, 2019, cumulative gross enrolment reported by Banks subject to verification of eligibility, etc. is over 15.47 crore under PMSBY. A total of 40,749 Claims were registered under PMSBY of which 32,176 have been disbursed.

Government of India launched the Stand Up India scheme on 5th April, 2016. The Scheme facilitates bank loans between Rs.10 lakh and Rs.1 crore to at least one Scheduled Caste/ Scheduled Tribe borrower and at least one Woman borrower per bank branch for setting up greenfield enterprises. This enterprise may be in manufacturing, services or the trading sector. The scheme which is being implemented through all Scheduled Commercial Banks is to benefit at least 2.5 lakh borrowers. The scheme is operational and the loan is being extended through Scheduled Commercial Banks across the country.
Stand Up India scheme caters to promoting entrepreneurship amongst women, SC & ST category i.e those sections of the population facing significant hurdles due to lack of advice/mentorship as well as inadequate and delayed credit. The scheme intends to leverage the institutional credit structure to reach out to these underserved sectors of the population in starting greenfield enterprises. It caters to both ready and trainee borrowers.
To extend collateral free coverage, Government of India has set up the Credit Guarantee Fund for Stand Up India (CGFSI). Apart from providing credit facility, Stand Up India Scheme also envisages extending handholding support to the potential borrowers. It provides for convergence with Central/State Government schemes. Applications under the scheme can also be made online on the dedicated Stand Up India portal(www.standupmitra.in). As on 31.03.2019, Rs. 16,085 crore has been sanctioned in 72,983 accounts (59,429 – women, 3,103-ST and 10,451 – SC).

The ‘Pradhan Mantri Vaya Vandana Yojana ’ has been launched by the Government to protect elderly persons aged 60 years and above against a future fall in their interest income due to the uncertain market conditions, as also to provide social security during old age. The scheme is implemented through the Life Insurance Corporation of India (LIC) and provides an assured return of 8% per annum for 10 years . Mode of pension payment under the Yojana is on a monthly, quarterly, half-yearly or annual basis depending on the option exercised by the subscriber.
The scheme was initially open for subscription for a period of one year i.e. from 4th May, 2017 to 3rd May, 2018. Further, the minimum purchase price under the scheme was Rs.1.5 lakh per family for a minimum pension of Rs. 1,000/- per month and the maximum purchase price was Rs.7.5 lakh per family for a maximum pension of Rs.5,000/- per month.
In pursuance to Budget Announcement 2018-19, the Pradhan Mantri Vaya Vandana Yojana has been extended up to 31st March, 2020. The limit of maximum purchase price of Rs. 7.5 lakh per family under the scheme has also been enhanced to Rs 15 lakh per senior citizen. Accordingly, the maximum pension admissible under the scheme is now Rs.10,000/- per month.

The workers in the unorganized sector constitute about 93% of the total work force in the country. The Government has been implementing some social security measures for certain occupational groups but the coverage is miniscule. Majority of the workers are still without any social security coverage. Recognizing the need for providing social security to these workers, the Central Government has introduced a Bill in the Parliament.
One of the major insecurities for workers in the unorganized sector is the frequent incidences of illness and need for medical care and hospitalization of such workers and their family members. Despite the expansion in the health facilities, illness remains one of the most prevalent causes of human deprivation in India. It has been clearly recognized that health insurance is one way of providing protection to poor households against the risk of health spending leading to poverty. However, most efforts to provide health insurance in the past have faced difficulties in both design and implementation. The poor are unable or unwilling to take up health insurance because of its cost, or lack of perceived benefits. Organizing and administering health insurance, especially in rural areas, is also difficult.