Subject: Minutes of the Standing Committee Meeting held on 07.03.2019 under the Chairmanship of Secretary (Personnel) - reg. 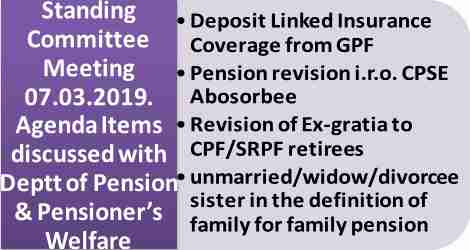 (x) Item No.3 : Revision of the benefit of Deposit Linked Insurance Coverage from GPF :
Joint Secretary (Pension) informed that a proposal was sent to Department of Expenditure to consider enhancement of the limit set for Deposit Linked Insurance Scheme,1976 from Rs.60,000/- to Rs.6,00,000/-. Department of Expenditure requested for clarification and some precedent cases which are with EPFO. Since, Ministry of Labour and Employment has such similar benefits, wherein the limit of DLIS has been enhanced to 6,00,000/- for depositors in EPF, covered under the scheme, the precedent policy of M/o Labour & Employment along with the proposal has now been sent to Department of Expenditure. He further informed that the Department of Expenditure has been reminded to take action expeditiously.
(xi) Item No.17 & 32 : Extending the benefit of pension revision to the Central Government employees and officials, who are absorbed in the Central Public Sector undertakings :
This is about the revision of the restored one third pension and notional full pension of Central Govt. employees, who have been permanently absorbed in autonomous bodies and have drawn one time lum-sum terminal benefits equal to 10% of their pension and were granted restoration of one- third commuted portion of pension.
Joint Secretary (Pension) stated that D/oP&PW has issued orders on 23.6.2017 for restoration of full pension to pensioners absorbed in autonomous bodies, including revision after 7th CPC after completion of 15 years from the date of commutation. It was decided that this item may be treated as closed.
(xii) Item No.18: Revision of Ex-gratia to CPF/SRPF retirees :
Joint Secretary (Pension) stated that all group ‘A’, ‘B’, ‘C’, and erst- while Group (D) officers are covered under the said scheme. The matter has been reviewed and is being sent to Department of Expenditure for consideration. Before the matter is sent to Department of Expenditure for consideration, Pension disbursing Banks and CPAO has been requested to furnish numbers of such beneficiaries so that financial implication could be calculated. The information is still awaited.
Staff Side requested that since the matter is getting delayed, necessary Govt. orders may be issued at the earliest.
(xiii) Item No.20: Include unmarried/widow/divorcee sister in the definition of family for family pension :
Joint Secretary (Pension) stated that the matter has been examined but the demand has not been acceded.
Chairman advised Department of Pensions and Pensioners’ Welfare to re-consider the issue.