Subject: Adoption of instructions issued by DoP&T regarding restrictions of officiating pay under FR-35 (Rule 1329 IREC Vol. II) in the context of RS(RP) Rules, 2016 in lieu of Charge Allowance.

Consequent upon the decision taken by Government of India vide MoF’s Resolution No. 1-2/2016-IC dated 25.07.2016, recommendations of 7 Central Pay Commission regarding all the Allowances (except Dearness Allowance) were referred to a Committee of Secretaries headed by the Finance Secretary. The Committee’s recommendations were implemented w.e.f. 01.07.2017 vide MoF’s Resolution No. 11-1/2016-IC dated 06.07.2017.
In terms of Para 8.2.5 of 7th CPC’s Report, all the allowances not mentioned in the 7th CPC’s Report ceased to exist w.e.f 01.07.2017.
2. It is observed that Charge Allowance, which is granted in Indian Railways to Officers officiating on a higher post in administrative exigencies, was also not included in the report of the 7th CPC and hence stands abolished w.e.f. 01.07.2017.
3. It has now been decided by the Railway Board that DoPT’s Office Memorandum No. 1/4/2017-Estt.(Pay-I) dated 28.02.2019 (Annexure-I) regarding Restriction of pay under FR-35 (Rule 1329 IREC Vol. ID) in the context of CCS(RP) Rules, 2016 may be adopted in mutatis mutandis manner in Indian Railways in context of RS(RP) Rules, 2016 in place of Charge Allowance w.e.f. 01.07.2017.
Hindi version will follow.
(Jaya Kumar G)
Deputy Director(Pay Commission) VII
Railway Board 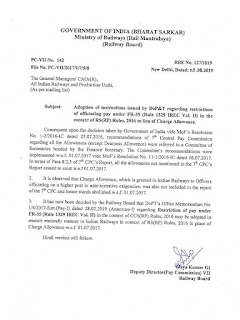