Uniform Age of Retirement of All CAPFs irrespective of the Ranks: Text of MHA Order

F.N.45020/112019/Legal-I
Government of India,
Ministry of Home Affairs,
(Pers-II Desk, Police II Division)
O R D E R
Dated, the 19th Aug, 2019.
WHEREAS, Hon'ble High Court of Delhi in WP(C) No. 195112012 in the matter of Dev Sharma, Dy. Comdt. of ITBP Vs UOI & Anr. on 31.01.2019 directed the respondent to arrive at a decision regarding the retirement age which will be uniform for all members of CAPFs, inespective of the ranks including CISF and Assam Rifles at par and also to decide the date from which such change will be effected. However, the Court did not allow stay of the retirement of any personnel as per the existing age of retirement who might have retired before passing the order except that in the event of enhancement of retirement age, the differential period will be added to the period of service actually rendered for the purpose of pension.
2. In view of the aforesaid order, the matter has been examined and in compliance thereof, read with order dated 04.02.2019 passed in WP(C) No.695/2019 titled Ram Chander Kasania & Anr of BSF Vs UOI & Ors, it has been decided by the Competent Authority as under :-
a) Age of retirement will be as under:
Also read :अर्धसैनिक बलों को सेना के समान पेंशन नहीं, दोनों के सेवा नियमों और सेवानिवृत्ति की आयु में अंतर - केंद्र
Also read :7th CPC Uniform Allowance of Rs.10,000 to Army Jawans: Clarification on Media news
b) Date of effect will be the date of issue of order.
c) In respect of all the 29 petitioners as stated in para-02 and 03 in common Court order dated 31.01.2019 barring Petitioner No.09 in WP (C) No.4859/2013, relief as granted at para- 72 of the order be extended.
d) As regard those whose date of superannuation fell in between date of judgment and date of issue of order:
Also read :Date up to which enhanced family pension payable: for 7 years or 67 years of age of deceased retired govt servant whichever is less
Also read :Voluntary retirement or resignation by CAPF & AR Personnel
[View: Retirement age for all paramilitary force fixed at 60: MHA Order 19.08.2019]
i. Those who have got interim stay will be deemed to have not superannuated and will be governed by age of retirement as at (a) above.
ii. Those who have retired but did not approach any Court will be governed by the Court order dated 04.02.2019 clarifying para-72 of original order dated 31.O 1.2019 in Dev Sharma case (supra) and hence will be entitled to exercise options either for joining after returning all pensionary benefits, if received or will have an option to have benefit of fitment of pension on completion of age of 60 years.
3. All Forces are directed to comply with the Court orders narrated as above. Forces may amend provisions of Rules as applicable on above line.
Sd/-
(Lalit Kapoor)
Deputy Secretary (Pers-II) 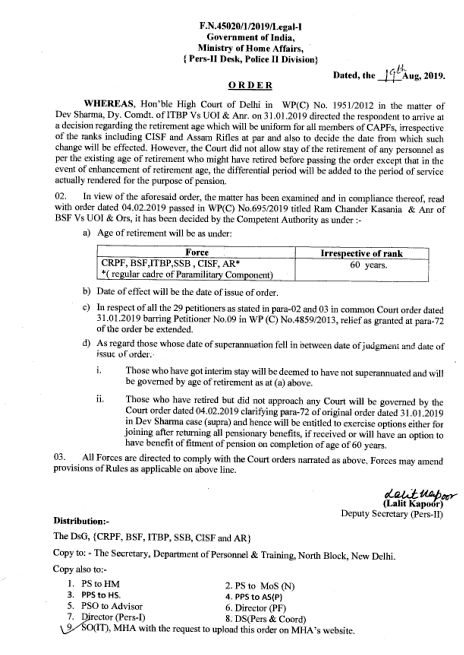 Source: Click here to view/download the Order from FB Group