Income Tax: Basic exemption limit on the income under the Finance Act, 2019

- February 05, 2020
GOVERNMENT OF INDIAMINISTRY OF FINANCEDEPARTMENT OF REVENUELOK SABHA
UNSTARRED QUESTION NO. 127
TO BE ANSWERED ONMONDAY 3rd JANUARY, 2020MAGHA 14, 1941 (SAKA)

THE MINISTER OF STATE IN MINISTRY OF FINANCE (SHRI ANURAG SINGH THAKUR)
(a) and (b): The Finance Act of respective years, inter-alia, provides for the rates of income-tax as well as the basic exemption limit on the income of individuals, Hindu undivided family, association of persons or body of individuals, artificial juridical person as defined under the Income-tax Act, 1961 (the Act). The Finance Bill prior to its enactment as an Act, is tabled before the Parliament during the Union Budget which is being presented every year in Lok Sabha on 1st February since 2017.
READ  Donations to Kashi Vishwanath temple will now get 100 per cent tax exemptions
(c) Before the general election of 2019, the exemption limits were provided under the Finance Act, 2019 and were the same as the basic exemption limits as provided under the Finance (No. 2) Act, 2019 which is as below:
(d) Vide Finance Act, 2019, section 87A of the Act was amended to provide a 100% tax rebate to individuals having total income up to Rs. 5 lakhs. 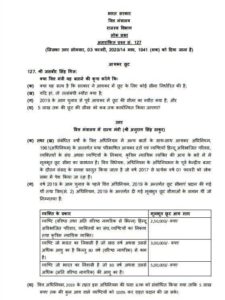