***
Sir,I am directed to refer to this Ministry’s letter No. 1(07/2013-D(Pension/Policy) dated 15.05.2015 regarding simplification of pension process for permanently disabled children and dependent parents/ siblings for family pension. It has been noticed that name of divorced/ widowed/ unmarried daughter has not been included in MoD letter No. 1/(07)/2013/D(Pension/Policy) dated 15.05.2015 causing delay in sanctioning of family pension to such eligible members 1.e. widowed/divorced/unmarried daughter, although name of such eligible members was a part of DoP&PW OM No. 1/6/08-P&PW(E) dated 22.06.2010.
2. It is, therefore, decided to issue amendment to Gol MoD letter No. 1(07)/2013-D(Pension/Policy) dated 15.05.2015 as under-
(a) For “disabled children/ siblings and dependent parents” read- “permanently disabled child/ children/ siblings/ dependent parents and widowed/ divorced/ unmarried daughter,” wherever it appears in GoI MoD letter dated 15.05.2015.
(b) New clause numbered 5(iii) “To widowed/divorced/unmarried daughters” may be inserted below Para-5(ii) to GoI MoD letter dated 15.05.2015 as under:-
(iii) “To widowed/divorced/unmarried daughters”
In case the eligibility of all the above categories of claimant mentioned in para 5(i) and 5(ii) of GoI, MoD letter no. (7)/2013-D(Pension/Policy) dated 15.05.2015 ceases to be payable, the PDA will allow family pension to such widowed/divorced/ unmarried daughter in their hierarchy of DoB after production of marriage/ re-marriage/ death certificate, as the case may be, in respect of all the categories of claimants mentioned in Sub Para — i) and (i) of para 5 of GoI, MoD letter dated 15.05.2015, if any.”
(c) After inserting above clause in Gol, MoD letter dated 15.05.2015, remaining sub clauses under para -5 may be renumbered in following manner:   Existing Clause 5(iii) “To the dependent parents-first mother, then father” to be renumbered as 5(iv)
3. The word “Farther” in first line of para 5(iii) of GoI, MoD letter no. 1(7)/2013-D(Pension/Policy) dated 15.05.2015 may be replaced by word “Father”.
4. The renumbered para 5(iv) referred above may be amended as follows:-
For: “When claimants in (i) and (ii) die or become ineligible- on production of death certificate/ re-marriage-intimation of spouse and/ or death certificates of all permanently disabled children, family pension would be allowed by PDA to dependent parents.”
Read: “When claimants in (i), (ii) and (iii) die or become ineligible- on production of death certificate/ marriage/ re-marriage -intimation of spouse and/ or on production/ intimation of marriage/ re-marriage/ death certificates (as the case may be) of all the eligible dependent son(s) or daughter(s) including permanently disabled child/children and widowed/ divorced/ unmarried daughter, family pension would be allowed by the PDA to dependent parents.”
5. All other terms and conditions shall remain unchanged.
6. This issues with the concurrence of the finance Division of this Ministry vide their ID No 10(01)/2015/Fin/Pen dated 18/02/2020.
7. Hindi version will follow.
Yours Faithfully,
(A K Agarwal)Deputy Secretary to the Government of India
Copy to:
As per standard list.AFA(Pension)CGDA, New Delhi 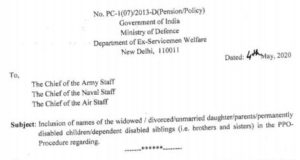