Notional Increment on the day of superannuation: Concerned Branch to deal with issues in Railway Board

- May 14, 2020
Notional Increment on the day of superannuation: Concerned Branch to deal with issues in Railway Board
भारत सरकार GOVERNMENT OF INDIAरेल मंत्रालय MINISTRY OF RAILWAYSरेलवे बोर्ड (RAILWAY BOARD)Office Order No. 35 of 2020
(Amendment No. 37 to July2013 edition of the subject list)

Sub: Concerned Branch to deal with issues of Notional Increment on the day of superannuation.

The issue as to which Directorate will deal with the subject relating to grant of Notional Increment on the day of superannuation, when the same was due on next day, exclusively for the purpose of fixation of pension was under consideration because of differences between concerned branch regarding processing of such cases.
2. It has now have been decided with the approval of the competent authority that all such case for grant of notional increment on the day of retirement which is at variance with 6th/7th CPC and existing provision for grant of increment under RSRP Rule be examined and handled by Pay Commission Directorate (PC-VI/PC-VII as the case may be). Post grant of notional increment the issue of Pension would be handled by F(E)-III unit. In case of any issue not related to 6th/7th CPC warranting grant of notional increment under FR rules would also be handled/coordinated by F(E) Directorate.
2. Henceforth all court cases/RTI reference/Railway reference/representation etc., would accordingly be handled by PC and F(E) Directorate respectively.
3, Accordingly, the subject list of F(E)-III and PC-VI/ PC-VII stands amended.
E No. 2020/0&M/26/2Dated:-11.05.2020
(B. Majumdar)Joint Secretary/Railway Board
All Officers and Branches in Board’s Office/Metro Bhawan, Pragati Maidan and at Dayabasti,New Delhi 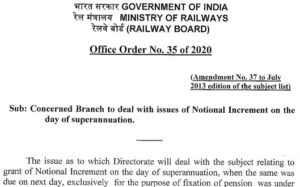