Subject: Processing of Mercy Petition for grant of service pension under Pension Regulations.

Subject: Processing of Mercy Petition for grant of service pension under Pension Regulations.

As you are aware, Regulations 29 and 41 of the Pension Regulation of Army (PRA, 2008) (Part I) (Regulations 16 and 113 of PRA, 1961) (Part I)] provide that an individual who is cashiered/dismissed from service under the provisions of the Army Act or removed under the Rules made thereunder is not eligible for pension or gratuity in respect of all previous service. However, in exceptional cases, the competent authority, on submission of an appeal to that effect by the individual, may at its discretion sanction pension/gratuity or both at a rate not exceeding that which would be otherwise admissible to him on retirement/discharge. Such appeals are also required to be filed within two years from the date of cashiering/ dismissal/removal from  service. Similar provisions exist in the Pension Regulations of both the Air Force and the Navy.

2. The power of the competent authority for deciding the aforesaid appeals was delegated to the AG/AOP/COP vide Ministry of Defence, Department of Defence, Order No.4684/Dir(PEN)/2001 dated 14.08.2001. Further, vide Ministry of Defence, Department of Ex-Servicemen Welfare Order No.4(24)/2015/D(Pen/Legal) dated 01.09.2016. Secretary, Department of Ex-Servicemen Welfare [Secretary (ESW)] has been designated as the competent authority for deciding aforesaid mercy appeals which are received beyond the period of two years of cashiering/dismissal/removal from service.

3. It has been seen from the review of such cases forwarded to this Department for disposal at the level of Secretary (ESW), that due to lack of awareness and knowledge about these provisions at the level of lower formations, these appeals are rejected at subordinate levels and reach Service HQrs or Department of Ex-Servicemen Welfare after many years of filing of such appeals. In many cases, such appeals are filed at the instance of Armed Forces Tribunal (AFT), when the concerned Ex-serviceman files an OA before the AFT for grant of pension or gratuity or both in case of cashiering/ dismissal/removal from service. The objective behind the provision for mercy appeal is to provide relief to Ex-servicemen and their family in exceptional situations on compassionate grounds. However, if the process itself gets inordinately delayed, the very objective behind such provision gets defeated.

4. It has also been seen that though the Ex-servicemen, who have been cashiered/ dismissed/ removed from service are not entitled to pension or gratuity or both as per the provisions of the relevant Pension Regulations, tend to make an application for grant of pension or gratuity or both. It is, therefore, advised that while rejecting such applications as per the provisions of the Pension Regulations, such Ex-servicemen may be informed about the provisions of mercy appeals and may be advised to file mercy appeal, if they so desire, with relevant documents in support of their appeal. Once, such appeals are filed, as stated above, these are to be decided only at the level of Adjutant  General/AOP/COP or Secretary, Department of Ex-Servicemen Welfare, as the case be.

5. These appeals may, therefore, be immediately forwarded by the lower formations through there relevant echelons for disposal at the level of Service Headquarters by the competent authority. Further, in cases where such appeals are  filed after a period of two years of cashiering/dismissal/removal from service, the same may be forwarded to this Department for decision at the level of Secretary (ESW).  Check List indicating the relevant documents to be sent along with such proposal for disposal of such appeals is enclosed. All the field level formations may be sensitised accordingly.

6. This issues with the approval of Secretary (ESW).

CHECKLIST FOR CONSIDERATION OF MERCY APPEAL 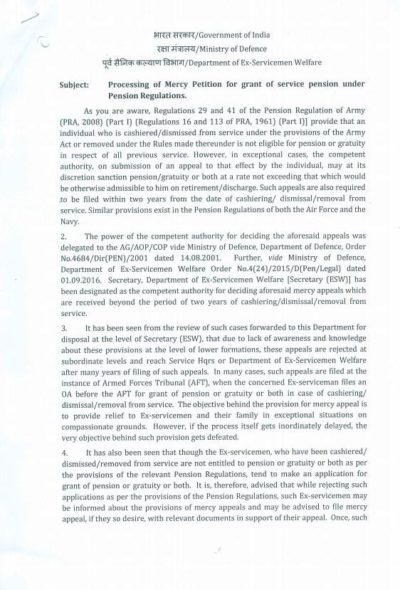 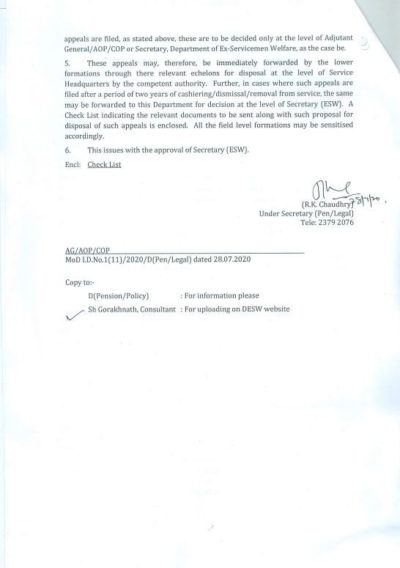 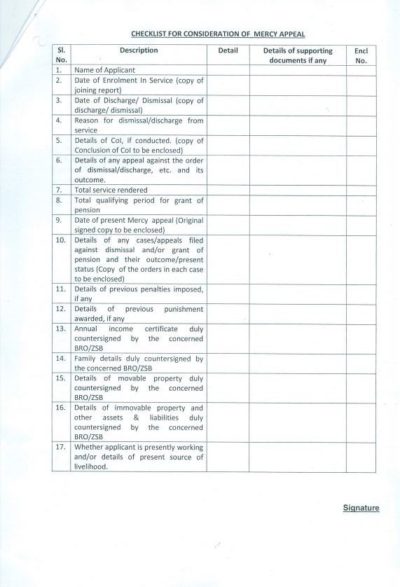