2. The undersigned is directed to inform that the approval of grant of 2nd Financial Upgradation after completing 24 yrs of service under ACP scheme of DoPT in respect of Draughtsman & Tech Officers in the pay scale of Rs.15600 — 39100 plus Grade pay of Rs. 6600/- in MES for the intervening period between 01 Jan 2006 to 30 Aug 2008 was granted by MoD after thorough scrutiny of the proposal.

3. Some complaints & grievances were filed against this grant of 2nd Financial Upgradation under ACP scheme by few individuals. In this connection the matter was again sent to MoD for further scrutiny and examinations. The decision of MoD in this regard is reproduced below :-

4. In view of the above, it is advised to take further necessary action as per the clarification of the MoD. 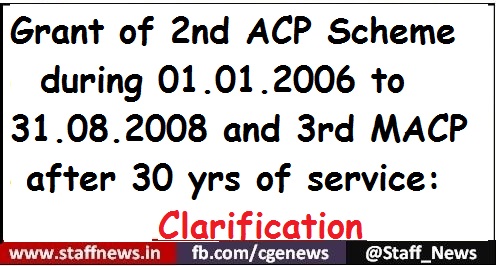